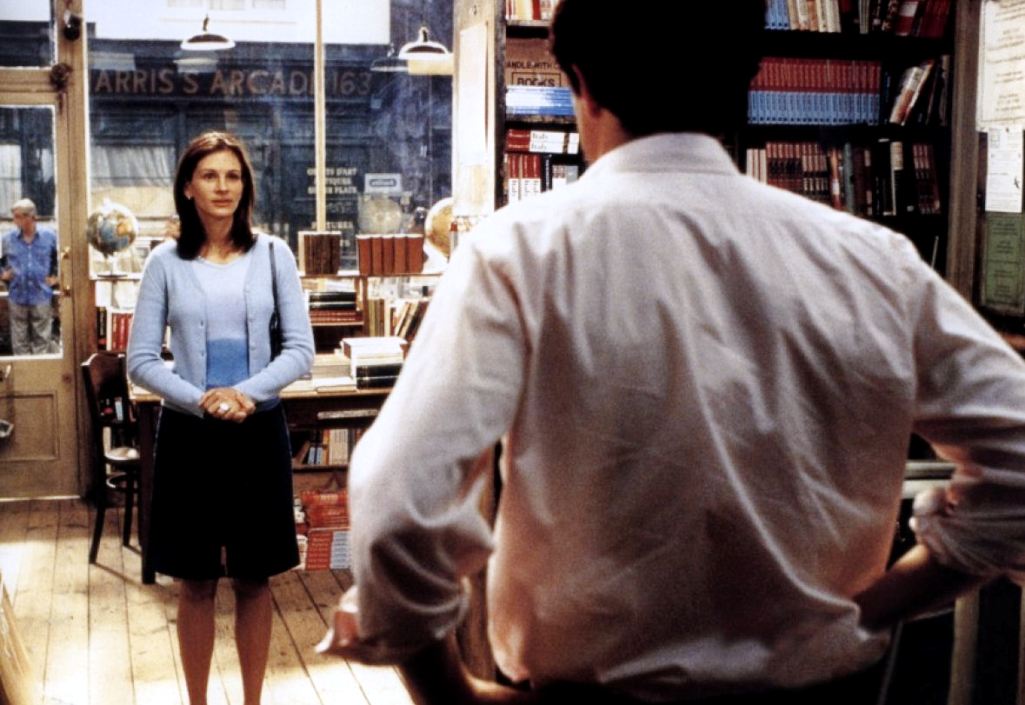 The love story between Hugh Grant, a shy bookseller from Notting Hill, and the beautiful and famous actress Anna Scott Julia Roberts returns to prime time TV on Rete 4, confirming its place among the most popular romantic comedies ahead of Christmas.

It has been almost 24 years since Roger Michell filmed”Notting Hill”, yet, the extraordinary sentimental comedy, set in the London district of the same name, still drives romantic cinephiles from all over the world crazy, which is why it is among the most popular titles in the Christmas programming. Again this year, in fact, Rete 4 is offering it again in prime time. The love story between William played by Hugh Grantsimple and somewhat clumsy bookseller, and the beautiful and famous actress Anna Scott who has the face of Julia Roberts is one of the most emotional ever told on the big screen, but while it may be called a classic there are still at least ten trivia that you are unaware of.

Hugh Grant said in an interview sometime after the film’s release that he didn’t want to kiss Julia Roberts. The English actor believed that her partner on the set had a mouth too big and the idea of ​​kissing her bothered him. Apparently, however, the American star forgave him and she said she was willing to work with him again.

Stuart Craig, a three-time Academy Award winner, is the film’s production designer. It was Curtis, however, who chose Notting Hill since he lived there and thought it interesting as a location for the mix of cultures and the dreamy atmosphere. However, the decision to film directly on the streets of the neighborhood led to many problems. For example, everyone was concerned about letting two such popular actors like Grant and Roberts roam the crowded streets. However, they decided to film several scenes there, increasing the number of security personnel and everything went smoothly.

3. Locations from the film: Will’s bookstore and house with the blue door

William’s (Hugh Grant) bookshop is located at 142 Portobello Road, and has actually been converted first into an antiques and then a souvenir shop – now called Notting Hill. The original”The Travel Bookshop” is located at 13 Blenheim Crescent, while at 91 Lansdowne Road is the home of Max and Bella. The home of the protagonist, located at 280 Westbourne Park Road, was owned by Curtis at that time. Behind the door blue, there is a large house, not the flat seen in the film, recreated in the studios instead. The front door was auctioned off at Christie’s for £20,000, all of which was donated to charity. The private garden where William and Anne they enter, climbing over a gate, is Rosmead Gardens, located in Rosmead Road.

4. The change of seasons scene

There are no special effects in the film, with the exception of the sequence in which William strolls along Portobello Road as the seasons change around him, giving us a sense of the passage of time. Effects are by Effects Associates (for rain) and Snow Business International (for snow). The scene was shot in one day, using four different sequences. In post-production, Framestore unified the films with the computer, in order to make the scene as uniform as possible.

During the birthday dinner scene, Anna (Julia Roberts) is asked about her latest film fee and she replies $15 million. In fact, that’s about the amount Julia Roberts took home filming.”Notting Hill”.

7. The madness of the characters

Pay attention: all the main characters – with the exception of Anna and William – are not so “normal”. Everyone has something wrong, but it is precisely this that gives the tone of “comedy” and frames the love story of the two protagonists.

The famous bench used in the film is now located in Queen Gardens in Perth, Australia. A Perth resident bought it and donated it to the city and now it actually sits in a beautiful park, closed at night.

9. The book read in the final scene of the film

There is a scene, the last one in the film, where William is reading on the park bench. The book in his hands is “Captain Corelli’s Mandolin” by Louis Bernières, which should have been the next film by director Roger Michell, immediately after Notting Hill. Michell, however, fell seriously ill and for the filming of the film, which was then actually made, John Madden was entrusted with the direction.

10. Difficulties for the scene in Leicester Square

One of the final sequences of the play, that of the presentation of an Anna Scott film, presented many difficulties. The director’s idea was to shoot in Leicester Square, but it wasn’t initially possible. Police had run into trouble with fans during the premiere of “Titanic” (1997), and feared it would happen again. Subsequently, however, the production obtained permission, provided that filming ended as soon as possible. And so it was done: the director finished the scene in 24 hours and after the crew went to Shepperton Studios, where most of the interior scenes were shot.

David Martin is the lead editor for Spark Chronicles. David has been working as a freelance journalist.
Previous https://gamingbeasts.com/escape-from-monkey-island-free-pc-game-download/
Next Abortion Hollywood reactions from Madonna to Chris Evans