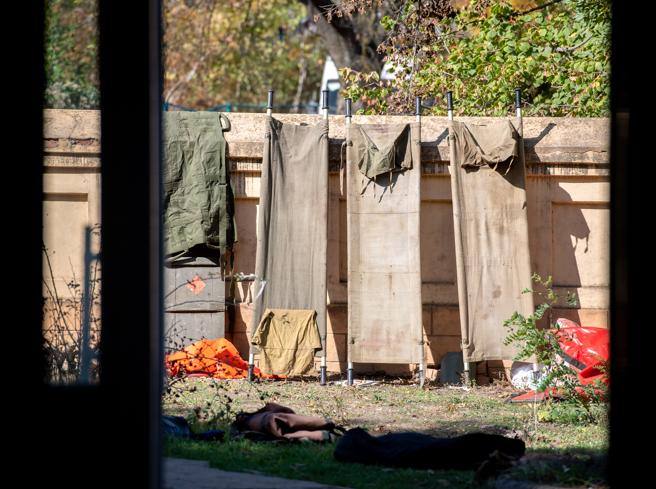 the 3 lines of the Kherson front – Corriere.it

In the “gray belt”, where the Russians do not retreat and the Ukrainians advance (and recover enemy corpses)

FROM OUR SEND
Kherson Front – It is no coincidence that, according to Kiev, the “worst battle of the war” is being prepared here. For Putin, Kherson is indispensable
to the water supply and security of naval bases in Crimea. For Zelensky, it would be the first major reconquest. And so, Major Sergej dictates the rules for visiting the front. “Geolocation off. No photos on the outside of the places where the soldiers live or fight. Even just the profile of a roof or the inclination of the sun. Anything”. Ukrainian intelligence knows that the Russians are scouring the Net and from a single image (and its metadata) they derive the coordinates for the missiles. For once, though, photos aren’t so essential. This land is steeped in hatred and it is easier to hear it from the words of those who live it than to see it.

«Other than Russian withdrawal – assures the major – for a week their trenches have been full of new soldiers, perhaps part of the 300 thousand just enlisted. We keep killing them, but they keep coming. We will win, but it will be slow and painful ».

The latest news on the war in Ukraine, live

“There are three areas parallel to the front – explains Alexandr, the first surgeon behind the fighting -. The gray zone is about twenty kilometers wide and is neither ours nor Russian. It means that the tanks advance, fire and come back. The first soldiers are in that gray band, the tanks at the limit, shortly after we are there with the field hospital, more or less ten kilometers from the tanks. Behind, the first line of artillery and then the real rear where the soldiers rest and sleep ».

Face exhausted, the doctor, who has been on duty for six months without interruption, wants to remain anonymous. “Only my wife knows that I operate with bombs exploding around, the others believe me safe.” What he calls the “rear” are the villages liberated by the Ukrainian advance in October. The evacuees cannot return yet, both because their homes could be hit by Russian guns and because they are useful for soldiers as dormitories.

The area is militarized with few, exceptional, civilians. Iryna is one of them: the only order of a sort of motorway restaurant that has petrol, but also comfort food for the soldiers. At night the whole station is dark, customers queue at the bathroom with their cell phone flashlights and argue with the Kalashnikov strap. A 60-watt lamp on Iryna’s counter. It looks like a picture of a militarist Hopper. She heats hamburgers and hot dogs with the microwave, gives change and doesn’t smile. She doesn’t feel like it. The shots of the cannons can be heard even inside her small dome of light. It is the Kiev artillery that is hammering Russian positions. For the soldiers a reassuring music, for her obviously not.

“There is a continuous flow of information that makes this war different from that of 1940 – says the doctor -. Here artillery and missiles work tens of kilometers away with ever-changing electronic maps. The first line remains made of flesh and bones digging holes trying to stay alive until the next sortie. But the battle is remote. There are hardly any clashes with rifles. In six months on the front line, I only treated 5 gunshot wounds. Instead, I no longer count the victims of cluster bombs, fragmentation, phosphorus bombs that cause internal bleeding, burns and above all multiple wounds and mass influxes. Ten, twenty soldiers at a time. Last month 120 arrivals in 24 hours. I no longer understood who I was operating. I sat down on a chair and fell asleep. ‘

His job is to stabilize the wounded and, if he needs more care, send him even further back than the front, by ambulance or helicopter. “So many times I have had soldiers who opposed the transfer. “Doctor, you don’t understand, how does my unit do without me? She has to get me back to fight ““.

Staying at the front is not like in the movies. Most of the time it takes to survive: eating, washing, warming up. In recent weeks there is a great deal of hatchet and sawing along the fields. Winter will be harsh and the soldiers are gathering wood.

Another “civilian” who faces the militarized zone is Alexandr Babic. Former policeman, now tourist agent and amateur historian, for years he has exhumed Soviet soldiers of the Second World War to reconstruct the phases of that clash. Now the Armed Forces use his experience to clear the newly reconquered areas of corpses. Babic resists nightmares by mixing reality with fiction. There are corpses that he connects to the Lord of the Rings orcs, others to the skeleton of Treasure Island. “I need it to normalize, perhaps not to go crazy.”

It is the “Nashite” mission inspired by the Spartan mothers who told their children to return from the war winners “with the shield” or, if dead, “on the shield”. “My team and I arrive when most of our fallen have already been recovered by fellow soldiers. The Russian dead, on the other hand, does not want to touch anyone. No “shield” for them. It’s a bad job, for the smell, for the feeling that remains in your hands and because they were enemies trying to kill us. ” Why then does he do it? “Because they are dead now, they have become good Russians.”

Videogames entered his life in the late '80s, at the time of the first meeting with Super Mario Bros, and even today they make it a permanent part, after almost 30 years. Pros and defects: he manages to finish Super Mario Bros in less than 5 minutes but he has never finished Final Fight with a credit ... he's still trying.
Previous FCIN1908 – Inter, compensation for Eriksen will arrive from Uefa: here is the figure
Next Celebrity Adventures 2022, including guests Vanessa Hudgens and David Garrett