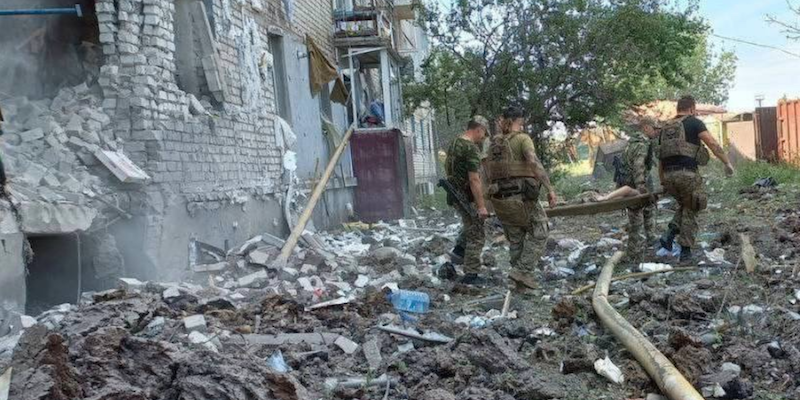 Ukrainian and Russian sources announced that on Sunday the Ukrainian army bombed a base of the Russian mercenaries of the Wagner group in Popasna, in the Luhansk region of eastern Ukraine. The governor of the region, Serhiy Hayday, said that the attack was carried out thanks to a photo shared on social networks by a pro-Russian account, which made it possible to identify the location of the base.

According to the Ukrainian Interior Ministry, the attack was carried out with HIMARS rocket launchers, which Ukraine received weeks ago from the United States.

A few days ago, the Gray Zone (RSOTM) Telegram channel posted photos of a visit to the so-called Wagner HQ in the Donbas (Popasna). Prigozhin may have been there.

The photos were apparently easy to geolocate. Ukraine destroyed it in a HIMARS strike today. https://t.co/dZCh3oqhpH pic.twitter.com/ejkCLDRlrX

The governor of Luhansk said it is not yet known whether the attack resulted in deaths, and if so how many. According to the Institute for the Study of War (ISW) military study center, however, the attack could weaken the Wagner Group’s ability to organize and coordinate attacks in this largely Russian-controlled area.

The photo that would have made it possible to identify the base of the group would have been released last August 9 on Telegram, from the account of a pro-Russian military correspondent: it showed five men in uniform in front of the base, with the ‘sign with the name of the street: the attack would have been carried out on Sunday, five days later. At the moment, however, it is impossible to establish whether the identification of the base actually took place thanks to this photo or not.

The Wagner group is a PMC (Private Military Company) made up mostly of ex-military, ex-policemen and ex-Russian security agents. Although formally it is a private group of mercenaries, in fact it is quite close to President Vladimir Putin and acts as an instrument of Russian military strategy, participating in military operations in various countries of the world where Russia has intervened or has interests, such as Libya, Syria , Mali and Central African Republic.

Wagner is considered one of the most efficient mercenary groups in the world, known for its pro-Nazi ideology and often accused by international organizations of war crimes and the use of torture systems. It has been present in Ukraine at least since 2014, the year of the invasion and annexation of the Crimean peninsula. According to American and British intelligence, there are at least a thousand mercenaries in the east of Ukraine.

– Read also: Who are the mercenaries of the Wagner group

Videogames entered his life in the late '80s, at the time of the first meeting with Super Mario Bros, and even today they make it a permanent part, after almost 30 years. Pros and defects: he manages to finish Super Mario Bros in less than 5 minutes but he has never finished Final Fight with a credit ... he's still trying.
Previous The 42 ”PG42UQ OLED gaming monitor available. Asus: “Better this than a TV”
Next Test passed for SpaceX’s Starship rocket – Space & Astronomy