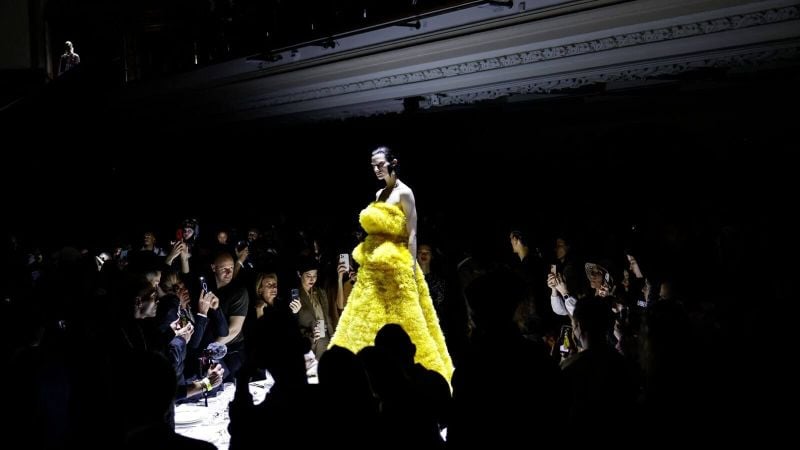 The collection launched by the English maison, presented live after the digital launches of the pandemic, mixes different stylistic suggestions to restore the image of contemporary London

Giving body to the concept of britishnessconsubstantial with a brand that cannot be more English, summarizing in a clash between stylistic canons and heterogeneous suggestions the infinite facets of London. This is how we can summarize the idea behind the last, double show (man and woman) Fall / Winter 2022 Of Burberry, returned on 11 March to parade live in the scenic setting of Central Hall Westminster, after two years of digital substitutes for the catwalk. Translating similar premises into a coherent collection sounds complicated, however it must be remembered that the artistic director of the label Riccardo Tisci in his long period at the reins of Givenchy he had proved to be a seminal figure for the emergence of that symbiosis between couture and “elevated” streetwear which has now become a practice in the fashion world, and is therefore perfectly capable of reconciling the many dualities that distinguish the capital of the United Kingdom (royalty and punk, the masterful tailoring of Savile Row and the extravagance of clubbers Londoners, the relaxation of picnic clothing in countryside and the disruption of subcultures), ultimately keeping together the classical blazon of a more than one hundred-year-old maison and the metropolitan attitude, which he has favored since unsuspected times.

HOW THE BURBERRY FALL / WINTER 2022 COLLECTION IS PRESENTED

In the F / W 2022 signed Burberry the lemmas of the company’s aesthetic vocabulary – the emblematic check in shades of beige, white, black and red, the outerwear, the motifs taken from the archives such as the logo of the equestrian rider or the emblem with the oak leaf – therefore blend with the urban spirit infused in the outfits, both playful and biting, the true leitmotiv of the season, both for menswear and womenswear.

The first, presented at the opening of the show, with the models (some exceptional, see Mahmood or the boxer Richard Riakporhe) sent to the semicircular steps of the theater, results in a procession of archetypal brand outerwear, from the trench coat to the duster coat, from the quilted jacket to the aviator jacket, reinvented through stratifications (for example bomber on the overcoat, padded rugby shirt on the car coat , a la Barbour jacket on the flannel suit) or visually impacting solutions such as shiny jewel buttons, leather straps to replace the frogs of the duffle coat, rigid hoods to frame the face and, at the end, huge bands in ribbed fabric or fur echo, which dissect the figure at shoulder height (uncovered). Equally unusual solutions are used to modify the silhouette, outlined by wide-legged trousers with a very high waist, sometimes hoisted up to touch the chest (alternatively, flowing skirts that touch the floor), drawstrings, closures borrowed from female corsetry that thin the waistline; the accessories chapter is made up of crossbody bags, envelopes in regenerated nappa in bright colors, sneakers (hypertrophic, as usual for Tisci) and baseball hats, surmounted by simil headbands in ton sur ton.

THE DECONSTRUCTION OF THE CLASSIC WATERPROOF BY BURBERRY

Backstage, the latest men’s look breaks through – it should be said, since every mannequin makes an obligatory passage in the stalls, climbing onto the tables in the center of the space, laden with cutlery and ceramics signé Burberry – the women’s ready-to-wear, which shares several elements with its male counterpart, from the silvery flashes of the metal rings scattered on the fabrics to the insistent layering, from the autumn palette (with earthy colors interspersed with blasts of green, red, yellow, pink, powder blue) to the optical illusions returned by shading and contrasting designs, from caps with rounded inserts to the abundance of prints that celebrate the past glories of the brand.

The designer of Taranto origins also pushes on the accelerator in deconstruction, breaking down the classic raincoat of the house to make it a bustier robe with monumental bell skirts, splitting it with intricate pleats or profiling it with metal eyelets. He then enjoys disrupting the respectable look of the wool twin-set, sprinkling it with points of light to outline the image of the aforementioned Equestrian Knight, and launches new pieces catchy like the leather ankle boots with a massive heel, which sheath the leg up to beyond the knee, the Catherine bag (case with a rounded shape) and cat-eye glasses from flair 80s.

Attending the parade, a parterre de rois with in the front row, among others, Adam Driver (former testimonial of the Hero fragrance), actresses of rank (Rebecca Hall, Eiza González), the artist Leone d’Oro at the 2017 Venice Biennale Anne Imhof (regular collaborator of the creative director ), a handful of supermodels – those for which the name was enough (Naomi, Kate, Carla) – and new darlings of television series such as Marina Ruy Barbosa or Jacob Elordi of Euphoriato judging by the reactions all won over by the cutting edge métissage between British tradition and avant-garde that characterizes Tisci’s work for Burberry.