As America was thrilled with the Super Bowl final last Sunday, the hashtag #WEARESORRYBRITNEY (“Sorry Britney”) was gaining popularity on Twitter. This is the aftermath of the documentary “Framing Britney Spears”, which debuted on the Hulu platform that night. The film prepared by the editors of the New York Times reminded us of difficult moments in the career of a pop princess that most of us would prefer to forget.

Britney’s path to fame wasn’t all roses at all. Even when she received awards and achieved successive successes – we did not peek at the life of a spoiled celebrity, nor did we envy her wealth. We did not admire the vocal, dance or other talents that we associate with the slogan “Britney Spears” on a daily basis. Instead, we got a lecture about the media, journalists, the music industry, pop culture, her family, lawyers, and … about ourselves.

Each of us has contributed to the way in which we have been treated for many years.

One of the most shocking moments in the documentary comes when 11-year-old Britney talks to the host of the Starsearch show in which she participated. Before a girl from a small town in Louisiana gained popularity by performing in the “Mickey Mouse Club”, she just wanted to become a singer. That’s why she tried her hand at a talent show. After the fantastic performance of the song “Love Can Build A Brigde”, Spears stood face to face on the stage with the host of the show – 69-year-old Ed McMahon.

If we were to consider what questions could be asked of a child of this age (let us emphasize: Britney was then 11 years old!) In similar circumstances – it would not occur to us today to ask a girl of this age “if she has a boyfriend”. However, the leader did not stop there. He trudged on, asking more and more unpleasant questions. “I noticed last week that you have beautiful eyes. Could I be your boyfriend?” he asked directly. It is not difficult to imagine how the 11-year-old will pass.

I would like to remind you that the program was watched by several million Americans. An upset Britney replied curtly, “It depends.” A boy who stood a few centimeters from the young singer heard a question about his origin. Quite a diverse set of questions.

The section in question starts at the fourth minute of the recording.

Unfortunately – there are more moments that reveal how a rising star (and a woman at the same time) was treated. Journalists had no trouble asking Spears directly on live shows if “her breasts were fake.” She herself usually avoided answering, giggling nervously. Imagine a situation where, at a press conference, someone questions your virginity – and you are only 20 years old and you are simply ashamed to raise such topics in public. This was everyday life for Britney.

While the sensationalists of tabloids fed on Britney’s next dramas, her boyfriend at the time did not defend his beloved. When they decided to split up, Justin Timberlake told the media that it was the promiscuity of the pop princess that was the reason for their separation. It is worth noting that the singer did not fail to mention that in fact he was sleeping with Britney, and her “virginity” was only a marketing measure. Oddly enough, these confessions coincided with the release of Justin’s first album.

At one point in the document, the sentence is said: “It was the time of boy bands, and no one was interested in singers.” It’s hard to disagree with him. Spears was just blazing a trail for other friends who would probably not answer such uncomfortable questions or simply “screwed” a journalist these days.

It’s also hard to imagine a situation where Kendel Ehrlich, wife of the former Governor of Maryland, announces today that if she had had the chance to shoot Britney, she would have done so. The reason was allegedly bad influence of the singer on the children. When Diane Sawyer later quoted her words, agreeing with them in addition – the young star burst into tears. “Britney Cries During an Interview” – It’s a Great Headline for the Media!

The journalist, however, did not stop there and continued asking: why Spears “hurt Justin”, “why she broke up their relationship”, etc. The worst and most incomprehensible thing about it all is that such questions were asked by a woman – the other woman.

The fragment in question begins at the twentieth minute of the recording.

Although the document clearly shows the singer primarily as a strong woman who knew exactly what she wanted, it is difficult to win the fight against a world that constantly requires something from you. It was Britney who came up with the school uniform she starred in in the first music video. She was responsible for most of the business decisions at the beginning of her career. In the public opinion, however, it became a product that was supposed to be a role model for children, and at the same time – an image detached from its own personality, which was to tickle the ego of millions of men around the world.

All these events took place before 2007, when the star no longer had the strength to fight everyone around him, and her private life had just crumbled. Over the years, she managed to create a cyborg to prove her strength and independence. In subsequent interviews, Britney seemed to be increasingly tired of the constant attacks on herself – and perhaps in part also of the stereotypes that she had unwittingly created with the help of the media.

Unfortunately, her rage led her to a hopeless situation. The beginning of this stage in her life was a symbolic shaving of her hair. “I don’t want anyone to touch me,” she repeated as she left the barbershop where she had grabbed the razor a moment earlier. The scandal coincided with Britney’s struggle for custody of children. She herself was already struggling to break free. To be free. Almost every day, hordes of paparazzi followed her, which did not give her peace. The irony is that the “freedom” she expected was associated with being confined within the four walls of her own home. The more often she went out on the street without security guards – the more photos were published in tabloids. In such a situation it’s hard to catch your breath, not to mention the feeling of “being free”.

The rest of the article is below the photo. 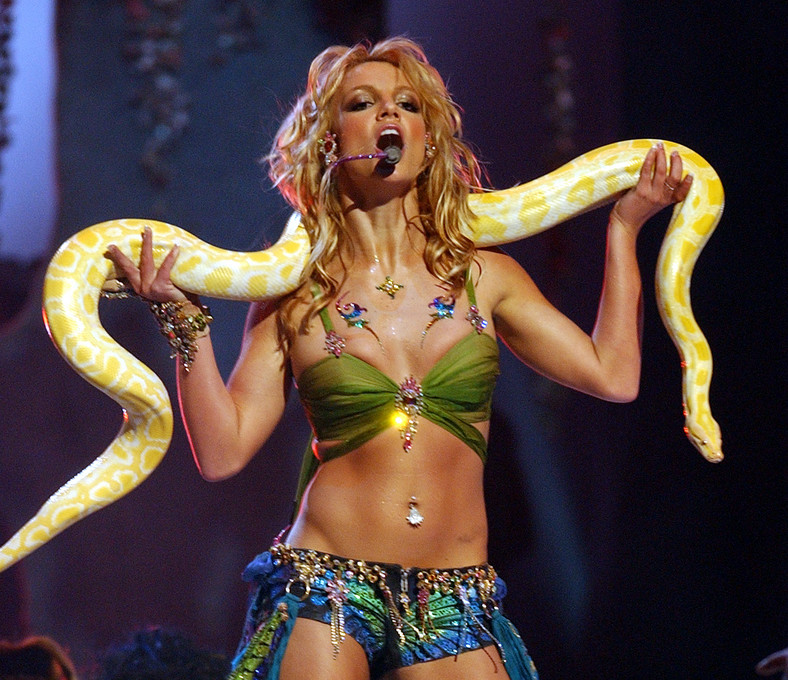 Over the years, we have evaluated her every step. Britney without shoes, Britney crying, Britney with a shaved head, Britney bad mother, Britney crazy, Britney a drug addict, Britney parties with Paris Hilton. Each of us was more or less engaged looking for new reports from Los Angeles in search of more rumors about the singer. We laughed, we pointed our fingers from afar. If we didn’t read, the media would stop publishing – if the media stopped publishing, we would stop reading. And so we made a vicious circle together – not worrying about the fact that the object of this game is a young woman who just wants to make a life for herself and regain the right to freedom.

Spears couldn’t allow herself to feel like herself for most of her life. She had to pretend to be the perfect little girl from the start – and she’s still trying to be. Even though she is a mature woman today, she still shows herself as sweet & perfect Britney on her Instagram. Even though the former splendor has long since faded.

Perhaps that is why she has become an icon of LGBT communities? After all, they too are often required to be someone else – “adapt and not show their love” – ​​although each of us should, after all, have the right to fully express ourselves, since we do not harm the other person.

Today, Britney Spears is under rigorous tutelage following a meltdown thirteen years ago. Her legal guardian is her father, who deals with her finances, makes decisions about her trips, manages her career and signs all documents for her. The film does not show Jamie Spears in a good light, although it also does not directly criticize him. There is a cautious comment that such strict care is usually taken by the elderly, and not a world star who has managed to go on several huge tours in the last few years. Everything gets even more suspicious when we consider the fact that Jamie didn’t care for his daughter when she was at the peak of her career. “Someday my daughter will be so rich she’ll buy me a big boat,” he said to the director of the label that released Britney’s music. It seems to me that this one sentence says more about his relationship with his daughter than any other sentence he uttered afterwards. 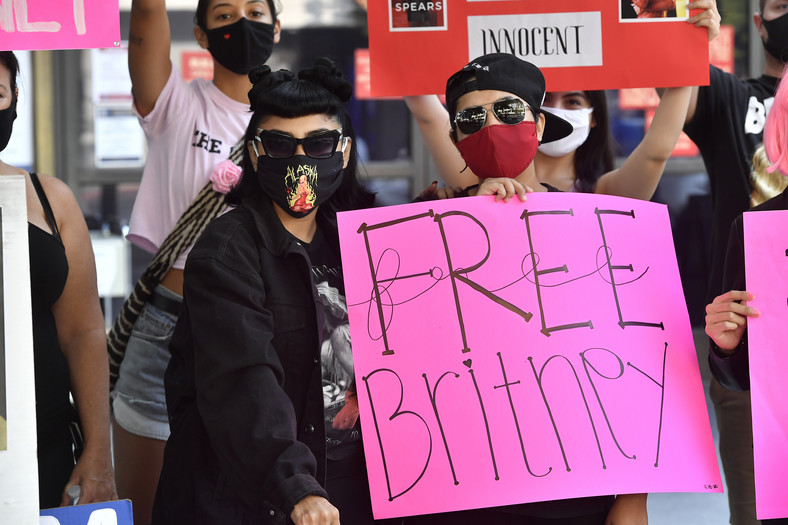 Fans protesting in front of the courthouse

Framing Britney Spears also sheds light on the #FreeBritney fan initiative to free their idol from her paternal tutelage. Fans from all over the world connect, look for old papers, statements – and try to prove that Spears is actually imprisoned by her own father. At the beginning, the movement was downplayed by the “serious media”, but when the big names of American show business began to support it, it was difficult to remain indifferent to the concerns and anxieties of the singer’s fans.

Although the editors of the New York Times asked people close to her for comments, no one replied. There were also attempts to contact the singer herself – also without a response. Hence, it is not even certain that Britney found out about the request at all, as she is under constant supervision of guardians and lawyers. Everything could have died away quickly, if not for her boyfriend, who openly criticized Jamie Spears a few days after the premiere of the document, using swear words … she asked for on her social media. And let’s stop getting excited about another news report about her private life and remember why Britney became a pop icon.