The Corset of the Empress, postmodern historical drama

The Corset of the Empress from Marie Kreutzer tells the story of Empress Sissi in a modern key. Elisabeth Amalia Eugenie of Wittelsbach was the Duchess of Bavaria and by marrying Emperor Franz Joseph she became Empress of Austria, Queen of Hungary, Bohemia and Croatia.

The Corset of the Empress: the double symbology

Caught in her forties, Empress Sissi is dissatisfied and perpetually maintaining a certain public image of herself. The pursuit of physical perfection and her elegant figure is visually illustrated by her corset as the personal maids, with great effort, tighten the laces every day around the chest of the empress.

But the corset is above all the symbol of the constraint of the woman’s personality, imprisoned, until suffocating, in the role imposed by her husband, by the court, by the subjects who always want her impeccable and, as an emblem of the homeland, represents the power of a whole empire, the Austro-Hungarian Empire. Especially since the hymn sung on every occasion assimilates its name and consequently depersonalizes it.

Luxembourgian actress Vicky Krieps gives face, body, voice and movements to the Empress Sissi working in some scenes with a subtraction acting and in others in over acting.

Examples of the first way can be admired in all the scenes in which Sissi is forced to participate in public demonstrations or at official and non-official dinners, in which every slightest gesture, look, smile determines a judgment on the sovereign.

On the contrary, Krieps demonstrates her acting strength in dramatic scenes such as, for example, sexual encounters with her husband or when she takes heroin on the recommendation of the court doctor to treat depression. 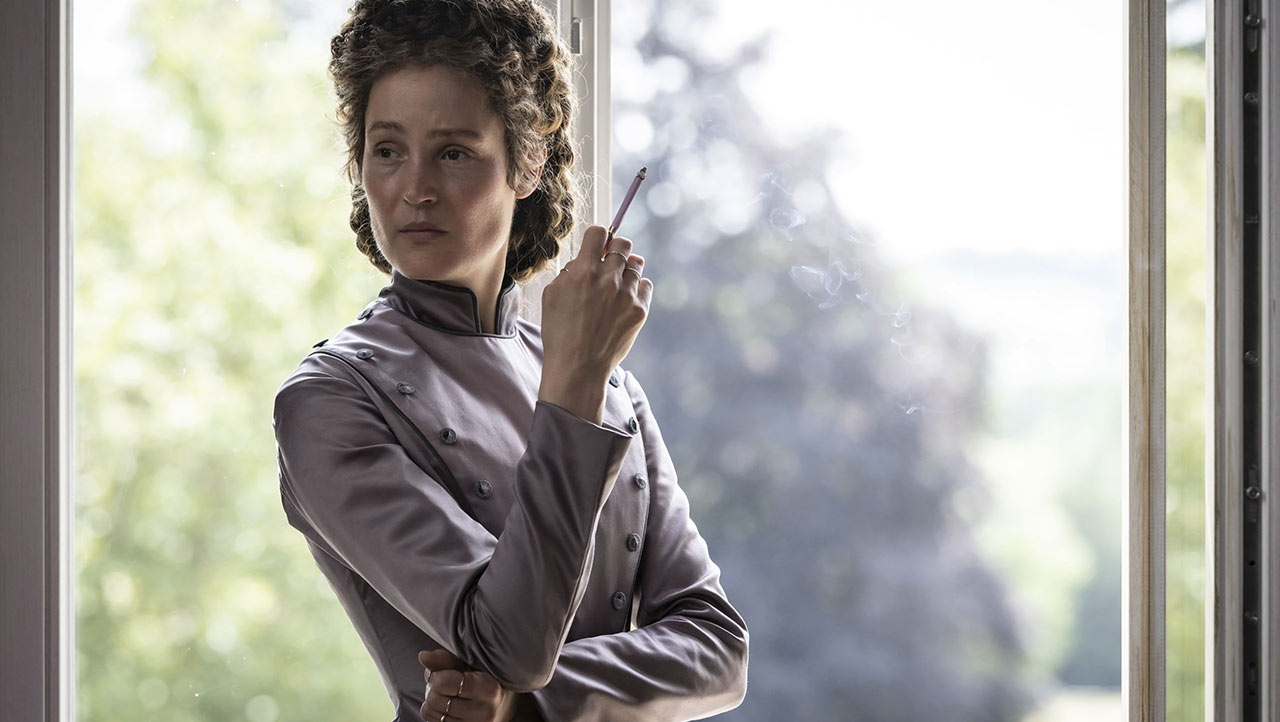 An interpretation of great depth and control by the Luxembourg actress who deserved the award for best actress in the section Un Certain Regard to the Cannes Film Festival 2022.

Far from the fabulous figure carried forward by the trilogy of the fifties, in which a young Romy Schneider gave an interpretation between naive and candid, Marie Kreutzer turns her into a complex and independent woman.

The relationship with her husband becomes more and more complicated due to constant betrayals with much younger girls. This only increases Sissi’s impatience with her royal life.

On the one hand it leads her to a suicide attempt, on the other to look for ways to escape. Here then she forces one of her maid to wear the clothes and the infamous corset to be free of drugs and make an escape into lysergic dreams.

Or, when he consciously invites her husband’s young mistress and communicates the rules, times and ways to satisfy the emperor’s wishes, giving her his authorization. An explicit way to control and free yourself from obligations that you no longer feel, rather than suffer hypocritically.

The Corset of the Empress: the Austrian director’s leap into postmodernism

The Corset of the Empress is the fifth feature film by the Austrian director, who looks back on a long career as a screenwriter and director in both cinema and television. Kreutzer loves to focus her stories on strong female figures always at the center of complex emotional ties, but with an often derivative and unoriginal staging. An example of her is her previous feature film The Ground Beneath My Feet presented to 69th Berlin Film Festival.

Also The Corset of the Empress fits into a mode in vogue in recent years of biographies of famous women. Let’s think about the most recent Blonde from Andrew Dominik on the figure of Marylin Monroe. Or to Spencer from Pablo Larrain on an episode in the life of Diana Princess of Wales, with which Kreutzer’s film has more than one element in common in the staging and shots of the exteriors and interiors.

A cinematic grammar that we can trace back to The duchess in which the love and social affairs of Georgiana Spencer are narrated, played by Keira Knightleyin the late eighteenth century English.

However, this latest work by Marie Kreutzer distinguishes itself in a positive way from past ones essentially for two reasons.

The first is the interpretative mimesis of Krieps, of which we have spoken, which the director manages to exploit to the maximum of her expressive rendering.

The second is a postmodern taste of the film with contemporary visual inserts in the story, but above all with an ending in which the empress is displaced in time and space with a clear homage to Jules and Jim from Francois Truffaut.

David Martin is the lead editor for Spark Chronicles. David has been working as a freelance journalist.
Previous ‘I’m pushing hard to do it’
Next Welcome To The Game II PC Game Download Full Version