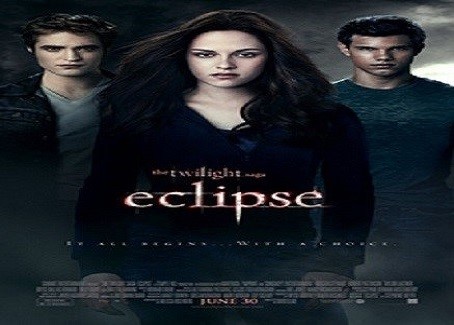 The cult movie on TV: “The Twilight Saga

The Twilight Saga: Eclipse is a 2010 film directed by David Slade with Kristen Stewart, Robert Pattinson, Taylor Lautner and Ashley Greene. Scripted by Melissa Rosenberg, it is the third film based on the Twilight series. The film is the film adaptation of Stephenie Meyer’s 2007 novel of the same name and sequel to The Twilight Saga: New Moon of 2009.

Bella returns to Forks with Edward after the misadventure with the Volturi in Italy. Now the girl has to choose between continuing her friendship with the werewolf Jacob or stop seeing him as Edward is extremely bothered by their relationship.
Meanwhile, Victoria, the nomadic vampire who was part of James’ clan, follows Bella to avenge the death of her partner killed by the Cullen family. Her presence becomes tangible for Edward and Bella when news of various heinous crimes committed by strangers in the city of Seattle appears in the newspapers.
The boys, meanwhile, prepare for graduation, an event that will mean the end of Bella’s mortal life, as Carlisle promised her that after graduating from high school he would turn her into a vampire.

Jacob’s constant intrusion begins to seriously annoy Edward, but he realizes that in his company Bella is safe from any attack by Victoria.
Given the imminent and inevitable confrontation that the Cullens will have to face with Victoria and her army of newborn vampires, Jasper decides to train her family and the Quileute pack of werewolves to face Victoria’s group, demonstrating excellent preparation in the fight. due to his past times in another vampire clan.
The day of the fight arrives and the vampires and werewolves ally themselves against the common enemy, protecting Bella and studying a battle strategy.

The day before the fight, Bella, Edward and Jacob set up camp on the top of a mountain, far from where the battle will take place. Bella, for fear that Edward might get killed, asks him to stay with her and the vampire accepts her, even though he is a little worried at the thought of her family in the heat of the fight. Jacob also remains with them, who with his high body temperature helps Bella not to die of cold during the night.
Jacob, the next day, troubled by Bella’s choice to love Edward, decides to join the rest of the group on the battlefield, but not before asking the girl to show him with a kiss that she cares about his life. Bella agrees to kiss him and, in doing so, she realizes she loves him as well as Edward, giving Jacob hope.

Meanwhile, the battle with the newborn vampires turns out to be a very bloody battle and, to protect Bella, Victoria’s only real target, remain Edward and the young werewolf Seth.
Victoria joins Bella with Riley, her new partner. During the fight, Riley is killed by Seth while Edward will kill Victoria in front of Bella’s eyes.

After the fight is over, the Cullen family and the werewolves reunite, however Jacob is seriously injured due to a sudden attack by a vampire who survived the fight.
Later, Bella goes to visit Jacob who, despite being tried because of his injuries and fever, shows her that he will wait for her even after her “transformation” into a vampire.

Eventually, Bella and Edward, sitting in the middle of a flowery meadow, finally decide to organize their wedding.

Members of the Volturi guard

The Victoria clan and other nomads

David Martin is the lead editor for Spark Chronicles. David has been working as a freelance journalist.
Previous Eagle Pictures’ July 2022 Home Video releases
Next The best TV series of 2022 (for the moment)