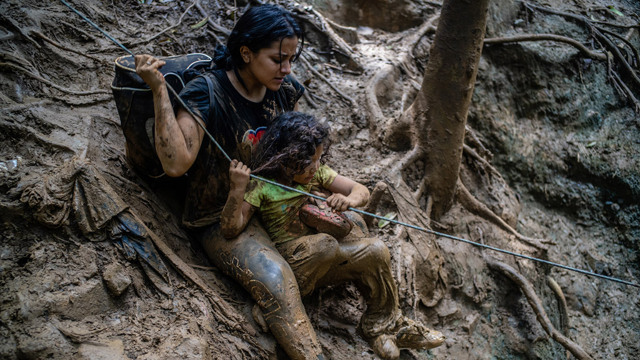 Olga Ramos is 45 years old and still a very young girl. For days she walked in mud, she forded rivers and climbed mountains carrying her baby on her shoulders. On the way she passed a terrified disabled child and she saw the corpse of a man with his hands tied around her neck. Ramos’ only goal was to reach the United States and to do so she would have traveled the same path thousands of times.

Ramos is part of an extraordinary movement of Venezuelan migrants who risk their lives to seek a better future and give their children some opportunities. Their story is told in a New York Times report with photographs by Federico Rios.

Hope or despair pushes them to walk across a strip of land called Tapón del Darién (the cap of the Darién). On the border between Panama and Colombia, the Darién is an expanse of about 25 thousand square kilometers of rainforests, mountains and swamps. There are no roads. The only way to get around it is by sea. It is considered one of the most dangerous regions in the world, a corridor for drug trafficking infested with poisonous jaguars and snakes.

Stories on social media
According to US authorities from 2015 to 2018, the worst period of Venezuela’s economic and social crisis, the detentions of migrants from the South American country on the southern border of the United States never exceeded 100 people. While this year 150,000 Venezuelans have already reached the border. The exodus began in 2014, shortly after the death of President Hugo Chávez and the election of his daughter Nicolás Maduro. Since then, more than seven million people have fled the country, according to UN figures updated in October. And of these, more than half do not have access to basic services: home, health, education, work.

Before the pandemic and the war in Ukraine, migrants fleeing Venezuela chose to settle in other Latin American countries, especially Colombia, Ecuador and Chile, due to their geographical, cultural and linguistic proximity.

But the economic consequences of the health crisis and the conflict in Europe have complicated living conditions in Latin America, so today for many Venezuelans the goal is to settle in the United States. The new wave of migration is having repercussions on the Biden administration on the eve of the mid-term elections, as Alessio Marchionna explained in detail in his American newsletter.

The New York Times writes that the increase in the number of Venezuelan migrants crossing the Darién has coincided with the proliferation of stories and photos of the crossing on social networks, in particular on Tik Tok with the hashtag #selvadarien. Often the photos of the trip and the emotional testimonies of those who make it through the forest push other people to take the same path, even if they ignore the dangers they face: adverse weather conditions, wild beasts, criminal groups and drug traffickers, extortion, sexual abuse and, in the worst case, death.

Passage to Costa Rica
Before reaching the United States, migrants pass through other Central American countries. Sometimes, while waiting to find the means to continue, they can get stuck for a long time. About a thousand Venezuelans a day enter Costa Rica from Paso Canoas, on the border with Panama. “For some months now, hundreds of Venezuelan families have camped in San José, the capital. Most of them display signs with messages of help to be able to continue the journey north, ”says journalist Wilfredo Miranda in an article published on the Honduran website Divergentes. The flow of Venezuelan migrants adds to the hundreds of thousands of Nicaraguans who have fled the authoritarian government of Sandinista leader Daniel Ortega since 2018 and take refuge in the neighboring country. On 12 October, the President of Costa Rica, Rodrigo Chaves, announced in a press conference that according to international agreements, his country has the duty to let transit migrants pass, to prevent them from committing crimes or forcing children to beg.

On the same day, US President Joe Biden and Mexican leader Andrés Manuel López Obrador (center left) also reached an agreement to curb irregular emigration from Venezuela. Washington has announced that all people arriving at the US border on foot or by sea will be sent back to Mexico. The measure will enter into force immediately and will not apply to those who were already in the United States. At the same time, the United States will authorize the regular arrival in the country of 24 thousand Venezuelan citizens for humanitarian reasons, with a procedure similar to that in force for Ukrainians fleeing the Russian invasion.

At the same time, the two countries will strengthen border controls to reduce the scope and power of criminal organizations that control migrant routes and people smuggling. According to some US officials, another measure the White House is considering to block the arrival of migrants at its borders is the lifting of economic sanctions against Caracas imposed by the Trump administration and largely maintained by President Biden.

The fact that Washington broke off diplomatic relations with Venezuela in 2019, when opposition leader Juan Guaidó proclaimed himself interim president of the country, makes repatriation of migrants entering the United States difficult. This is why many Venezuelans set off and cross the Darién: they hope that once they enter the United States the authorities will authorize them to stay. The pressure of new left-wing leaders in Latin America, in particular Gustavo Petro in Colombia, could also lead Washington to normalize relations with Caracas and to acknowledge that the policy adopted so far towards the Maduro government has not worked: it has not democratized the country and did not help it to get out of the economic crisis.

This article is taken from Sudamericana, the Internazionale newsletter that tells what is happening in Latin America. Sign up here.

Videogames entered his life in the late '80s, at the time of the first meeting with Super Mario Bros, and even today they make it a permanent part, after almost 30 years. Pros and defects: he manages to finish Super Mario Bros in less than 5 minutes but he has never finished Final Fight with a credit ... he's still trying.
Previous “We will not bow to this blackmail”
Next where to see the much talked about film by Olivia Wilde