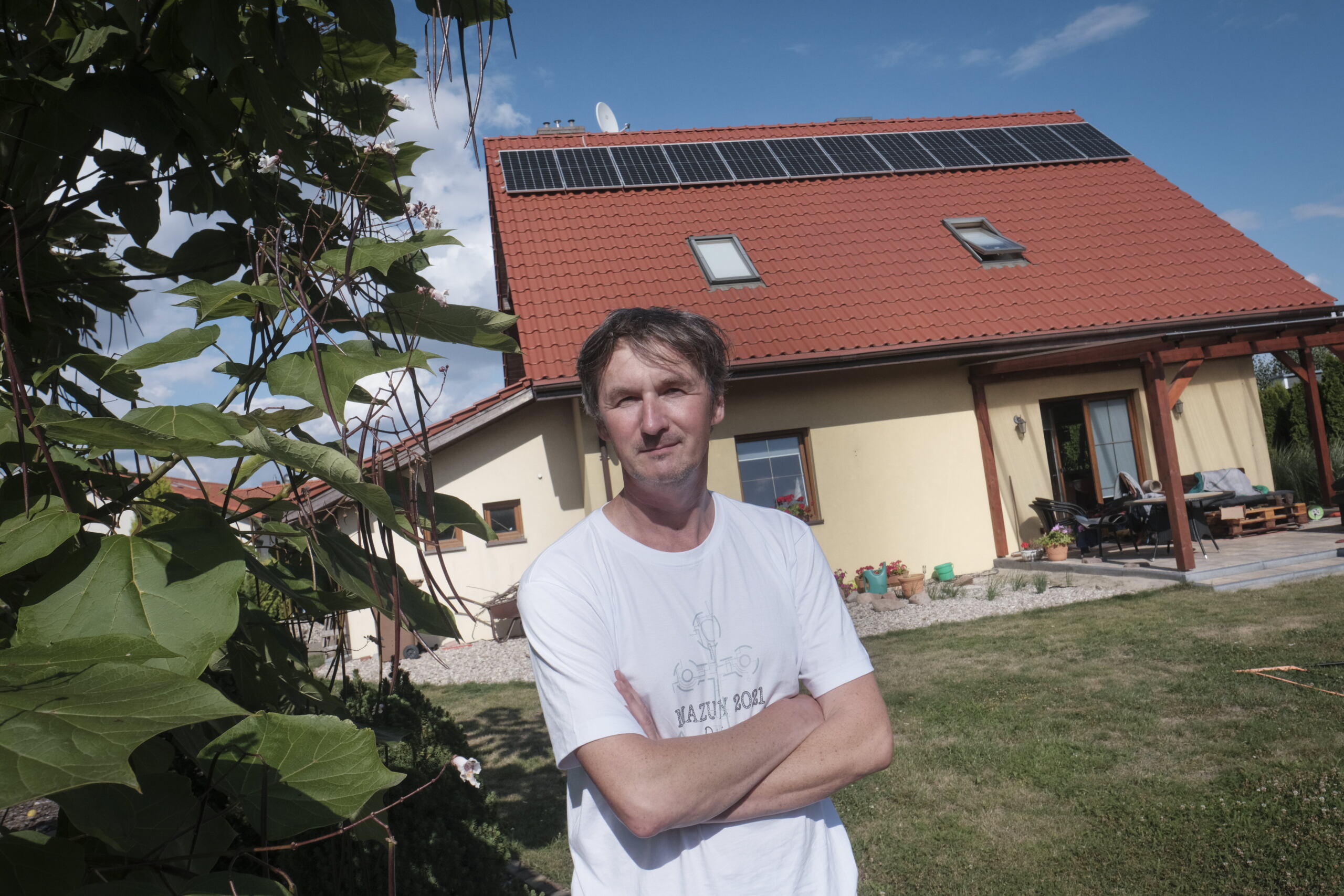 The electricity from the panels will become more expensive. Cause: PRL energy networks

The course of the session of the Złotów Commune Council in May was quite turbulent – at least if you believe the local media. (https://zlotowskie.pl/artykul/transformatory-nie-wyrzymuja/1172524) The reason was not ideological disputes or scandals involving officials from Złotów. The councilors talked about the problems with photovoltaics. The mayor of the commune, Piotr Lach, praised the residents for using renewable energy sources. After all, thanks to the panels installed on their roofs, the Greater Poland commune avoided the emission of the equivalent of over 1.2 thousand. tons of carbon dioxide.

Unfortunately, solar PV is set to fall victim to its own success in some places. It was pointed out by councilor Jacek Januszewski. In Radawnica (630 inhabitants), the panels already produce so much electricity that the grid becomes inefficient.

“I have information from a person who is a professional electrician. (…) The voltage there reaches 270 volts on sunny days, and the transformer is designed for 240 volts, ”says Januszewski, quoted by the portal Złotowskie.info. Additional electricity was pumped into the network, because the panels, during their “overproduction”, feed the power network with it. This happens on sunny days, outside the peak of energy consumption, when the household is not able to use all the energy produced by the panels. The councilor added that the installations in Radawniczna take part in a kind of “race” in the summer.

Those that receive sunlight first have a chance to be connected to the grid. The next ones may not be admitted to it, because the voltage goes up dangerously.

“Supposedly, it is common to burn out light bulbs,” said Januszewski.

“If no methods of storage or distribution are created, based on new power lines, it will turn out that the entire pro-ecological policy, persuading citizens to follow it and using subsidies will be a shot in the knee. (…) It will be a sunny day, and electricity will be produced by windmills, and we will fry in our homes from electrical installations, ”replied the mayor of the commune.

“The web is not made of rubber”

Burnout of light bulbs and equipment failures are not likely to threaten us – experts say. It is different with the “race” of panels, which is not just an urban legend. Indeed, when the network is most heavily loaded, some installations are disconnected from it. This is how inverters work, which turns direct current into alternating current – that is, the one we take from our sockets. The energy generated by the panels is simply wasted.

“This can happen when many houses on one street are equipped with photovoltaics,” says Paweł Czyżak, an energy specialist from the Instrat think-tank. “There is, however, no risk of the ‘explosive’ effects some people fear. If we have a good quality inverter, it takes care of voltage stabilization in the house. There should always be a voltage of 230 V. “

Even so, plant shutdowns are a problem that is getting worse. There are more and more photovoltaic micro-power plants, and the power system is not keeping up with their development.

That is why in recent months we have heard many times from the government that “the net is not made of rubber”. For this reason, the Sejm decided to slow down the development of Polish photovoltaics, resigning from the discount system.

According to them, the energy transferred to the grid can then be withdrawn from it on preferential terms. The vast majority of panel users can use 80 percent free of charge. power transferred to it as if it were a “virtual storage” of energy. Here is another problem – because the disconnected installation does not transmit electricity to the grid, and the prosumer (the owner of the panels, a conglomerate of the words “producer” and “consumer”) must then buy it from the operator at ordinary, retail rates. Thus, the profitability of photovoltaics is lowered.

“The electricity grid has limited flexibility. It cannot be a warehouse for more and more prosumers. Failure to undertake changes may lead to a catastrophe, said Deputy Climate Minister Ireneusz Zyska in an interview with Dziennik Gazeta Prawna.

Therefore, on Thursday, December 2, the Sejm decided to reject the Senate’s veto against the amendment to the RES Act. According to her, from April next year, prosumers will account for energy by selling it at wholesale and buying at retail rates – as we have already written about in OKO.press. Therefore, only the president’s signature remained until the changes came into force.

The limitations in the flexibility of the system also apply to coal-fired power plants. These still constitute the lion’s share of the Polish energy mix. About 70 percent of them come from them. current. When the photovoltaic pump it into the grid, you have to slightly reduce the possibilities of “carbon tubes” in order to increase the share of clean electricity in consumption and not to turn off the next micro-installations. And it’s not that simple at all.

“You can’t do it with the knob, so that after a few seconds the energy supply to the network is reduced. Coal power plants are not best suited to flexible operation, they must not go below certain power minimums, which are quite high. Reducing and increasing the power takes up to several hours, ”says Czyżak.

Therefore, exploiting the full potential of photovoltaics is difficult. The situation could be changed by the wider use of energy storage – real, not virtual. The problem is that such devices with a capacity that are satisfactory for a household can cost even 14-16 thousand. zlotys. Government subsidies for their purchase are only planned for the time being. Deputy Minister Zyska announced that subsidies may appear in the My Current 4.0 program announced for next year and amount to no more than half of the costs incurred.

Obsolete lines are the “core of the network”

As long as warehouses are not common, you have to deal with an inefficient, degraded and worn-out network. Specialist articles and reports of non-governmental organizations about it are published practically every few months. The diagnoses are always similar: the Polish energy sector will need changes – quick and costly.

They are necessary because power lines were designed several dozen years ago. The current flowed one way from the power plant to the user.

The nets guided above the ground by poles seemed to be a safe solution. However, the situation is changed by more and more frequent storms, which interrupt the flow of electricity in the summer – also that from photovoltaics.

“As many as 76 percent. high and medium voltage lines are more than 25 years old, and from 37 to 42 percent even more than 40 years “- we read in the report” Network for change “published by the think-tank Polityka Insight. – “Today they are the core of the country’s transmission and distribution infrastructure. Only 26 percent. medium voltage lines are wired (underground); the rest is on the surface and can be damaged by heavy snowfall or tornadoes. With the current level of operator expenditure, it will take 50 years to reach the optimal level of cabling. And there will be more and more weather anomalies “- diagnose the authors of the document from the end of 2019.

Longer and longer without electricity – despite the investment

Storms, blizzards and storms deprive us of access to electricity very often. Throughout 2016, energy consumers in Poland had to take into account interruptions in energy supplies for an average of 205 minutes. At the same time, in Germany, this time was only 14 minutes. After a few years, the situation did not improve at all. Power cuts from Energa (operator in the north of Poland) totaled 209 minutes per user. It is even worse in the south, where electricity is supplied by Tauron – customers without access to it remain on average for as much as 222 minutes – including over an hour and a half due to disasters. In this respect, Innogy, operating in the Warsaw agglomeration, looks the best – the average break time there was “only” 90 minutes.

It is related to the greatest degree of cabling of this operator’s network. For medium voltage networks it is above 96%. This means that there are just as many cables underground.

In Poland, the degree of wiring in medium and low voltage networks is 35 and 27 percent, respectively. The EU average for both is 75%.

According to the Polish Energy Policy, by 2040 we should reach this level at the end of the decade. It will be necessary to spend over PLN 47 billion.

Investments in the energy sector are costly, therefore the situation is not significantly improving, despite the huge funds that operators have allocated to the grid in recent years. For example, PGE Dystrybucja (part of the PGE Group) invested PLN 7 billion in its expansion and modernization from 2016 to 2019. Tauron Dystrybucja spent 1.8 billion PLN on improving the reliability of supplies in 2019 alone.

Not enough lines and transformers

Despite this, the Polish transmission and distribution network is still not dense enough, assess Forum Energii analysts in their report “Distribution networks. Planning and development “. “For 1 thousand. km2 in Poland there is 41 km of the electric power network. For comparison, in Germany it is 100 km, and in Switzerland as much as 161 km, ”the report reads. There are also too few transformer stations between the higher and lower voltage grids. And yet they are the source of electricity from photovoltaics.

Councilors of the Złotów commune may wrongly predict threats resulting from excess energy from photovoltaics. However, her mayor is right – soon “windmills will produce electricity”. Today they are a marginal part of the energy market. This is mainly due to the 10 H Act, which in practice makes it impossible to build wind farms in most of the country. We have already described the effects of its operation in OKO.press.

From time to time, however, the rulers announce the liberalization of this law, and in the Polish Energy Policy until 2040, offshore windmills are listed as one of the most important future renewable sources. The first are to start in 2025 and 27.

In two decades, 20 percent of the sea wind is to come. energy in Poland.

So another element will come to the energy mix, which for some time will produce electricity in parallel to the still operating coal blocks – and this electricity will have to fit somewhere.

“Hopefully, the national plans envisage an increase in spending on the modernization of distribution grids – from the current six billion to nine billion a year. Polskie Sieci Energetyczne are also planning investments for the next 10 years, their scale is very large, ”says Paweł Czyżak.

According to him, it is necessary to quickly wire the network, which will increase its capacity. This is especially important in the north of the country, which will receive electricity from wind farms, and in the vicinity of urban agglomerations – that is, the most “energy-consuming” areas. It is also important to introduce smart electricity meters into Polish homes. These devices are similar to traditional meters, but their functions allow you to adjust the energy supply to its actual consumption.

“So far, grid failure is the greatest threat to the development of renewable energy sources in Poland.” – Czyżak concludes.

OKO writes about the Polish economy.
Will you support our finances?

freelance journalist, his texts are published, among others in WP.pl Magazine, Smoglab and Wyborcza.pl. Author of podcasts, formerly a radio host associated with, among others, Radio Kraków and Radio Eska.

He likes dogs, pizza and popcorn. Already a fanboy of Nintendo and Sony, but today throws anything. He has collaborated on sites and magazines such as GameBlast, Nintendo World, Hero and Portal Pop, but today is dedicated exclusively to Spark Chronicles.
Previous India. Nagaland: Security forces mistakenly opened fire on miners. There are fatalities
Next The indexation of pensions in 2022 may be one of the largest in over 10 years. Big increases are anticipated