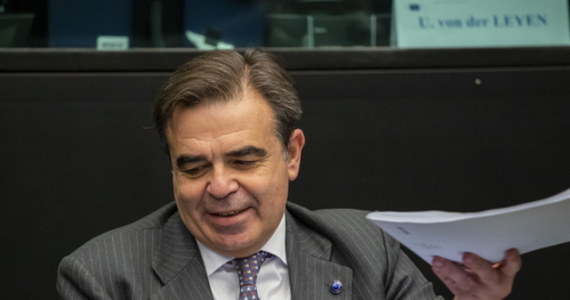 “This is not a migration crisis, but a serious threat to EU security,” said Vice-President of the European Commission Margaritis Schinas during a debate in the European Parliament on the tense situation at the EU’s external border with Belarus. The European Commission has proposed the creation of a black list on which carriers would be listed, dealing with smuggling and trafficking in human beings and facilitating such activities.

Being blacklisted operators of any type of transport – land, air, inland waterways or sea – would be done on a case-by-case basis.

Carriers who are blacklisted will receive a ban on flights over EU airspace and calling at European ports. They will also not be able to refuel or repair their machines in the EU. They also have to take into account the suspension of the license.

Attempts to destabilize the EU by instrumentalizing people will not work. The EU is united and is taking various actions to solve the problem with the situation at the EU’s external borders with Belarus she declared the head of the European Commission Ursula von der Leyen. It also announced a tripling of funds for Poland, Lithuania and Latvia for border surveillance. She also announced 3.5 million euros for the return of migrants. It is not only about return flights, but also centers for the reintegration of migrants in their countries of origin.

We must call things a spade and say what they are: a determined attempt to create a continuous and prolonged crisis as part of a wider, joint effort to destabilize the European Union, testing its unity and determination. This is not a migration crisis, only a serious threat to EU security – he explained during the debate deputy head of the European Commission Margaritis Schinas.

Poland’s borders are being tested. Lithuanian and Latvian borders as well. But these are the limits of Europe. A challenge for one is a challenge for all. The EU has strongly condemned and continues to strongly condemn this instrumentalisation of people. The European Council identified this risk at its meetings in June and October. And President von der Leyen stood before this House in September and made it clear that it would not be tolerated. – underlined Schinas.

The deputy head of the European Commission pointed out that the transit routes used by smugglers to bring migrants to the Belarusian border are being closed one after another.

Flights from Baghdad via Dubai, Beirut, Istanbul, Damascus and Tashkent have been suspended. Europe counted on its friends and there are many of them. We make it clear that there are no gaps to be exploited in the partnerships the European Union maintains around the world. As the matter extends well beyond the borders of Europe – it is a question of global concern when innocent people are abused – he pointed out. As he added, a global coalition is being built to oppose the instrumentalisation of migrants.

President Von der Leyen raised the matter at international level and with key partners, including the United States. On November 11, at the request of the EU, a closed session of the UN Security Council was held. Our Member States are also fully committed to the “Team Europe” approach Schinas explained.

The Belarusian regime is trying to divert attention from the dreadful situation inside the country by taking advantage of people’s desperation and pushing them towards the borders of the EU. It will not succeed. In response, we have expanded our sanctions system and adopt another package of measures against the perpetrators of this hybrid attack by the Lukashenka regime – announced the head of EU diplomacy Josep Borrell.

The Prime Minister of my country’s government, Mateusz Morawiecki, was to come here. Unfortunately, he was not allowed to do so, but he asked me to convey the content he wanted to express here. I do so all the more willingly because they reflect the views of my group, of my many millions of my compatriots, and of the people of Europe – began his speech MEP Ryszard Legutko, representing the European Conservatives and Reformists (ECR).

At the moment, over a dozen thousand Polish officers and soldiers are patrolling the eastern border of the European Union. For the first time since the Iron Curtain, the integrity of the borders of Poland and the Baltic states is under threat. This is a long shadow of Russia’s neo-imperial politics. For several weeks now, Lukashenka has been sending hundreds of civilians to the border every day. And this is not a repetition of the 2015 migration crisis. We are dealing with a planned provocation, the migrants of which are only Lukashenka’s tools, and the aim is to destabilize Europe Legutko read.

There is no need to prove Lukashenka’s intentions. He himself provides such evidence. “We will massacre all the scum that you, the West, financed.” These words were not spoken at the secret conference. Lukashenka said them on the BBC TV. Vladimir Putin’s Russia has been consistently striving for years to rebuild the imperial position and subjugate part of Europe. Its strength is ours. passivity. When it attacked Georgia, we were unable to oppose it. When it torn off Ukraine from Crimea, we were unable to stop it. When Lukashenka rigged the presidential election, we lacked the determination to defend the Belarusian people from the dictatorship. When Vladimir Putin himself started the game, whose goal was to play off individual European countries, there was no solidarity that would put a dam on the construction of the Nord Stream 2 gas pipeline – Prime Minister Mateusz Morawiecki wrote in a letter read out by a Polish MEP.

A regular battle for the future of Europe is taking place on the Polish-Belarusian border. It is high time for us to realize this – Mateusz Morawiecki appealed in the letter. He proposed further actions in 7 points.

First, no concessions. Things have gone too far. Russia and Belarus have crossed all borders and more cannot be allowed. Second, nothing about us without us. Any attempt to resolve a conflict must be based on an agreement. Any attempt to negotiate bypassing certain countries is a success for Vladimir Putin. Third, solidarity in the face of a common threat. This case does not concern Lithuania, Latvia, Poland and Estonia – it is a wider matter. Fourth, words are no longer enough. We must act decisively, inter alia, by sanctions. Fifth, transatlantic cooperation. This conflict has the dimension of a civilization clash and it requires an appropriate response not only within the EU, but also the expansion of cooperation to include NATO. Sixth, a common energy policy. The EU is the object of Russia’s energy blackmail because we continue to play against each other in energy policy, and not for each other. Until that changes, we can be sure that Putin will play these interests to his advantage. Seventh, Europe is more than the EU. Countries that remain outside the EU, such as Ukraine or Moldova, must get a signal that they will not be left alone in the state of Moscow’s neo-imperial policy – Morawiecki summed up in the letter read by Legutka.

MEP Sylwia Spurek during the debate, she judged the European Commission to be ineffective in helping migrants.

Former head of the Polish government and currently MEP Beata Szydło she said during the debate that today there are three of the most serious problems that need to be solved in the EU. This is, of course, Covid, the hybrid war on the eastern border of the EU, as well as the energy crisis – the threat of poverty for individual EU countries and Europeans – she replaced.

Today Poland and the Baltic states defend the security and sovereignty of the Union. We must thank all those who support us, but most of all we must thank the soldiers and officers who fight every day for the security of Europe and Europeans said Szydło. She warned that Lukashenka, supported by Putin, had declared a hybrid war on the EU. You must be aware of this – she pointed out.

Most of us focus only on the humanitarian drama on the Belarusian-Polish border. This conflict on the border is very convenient for Lukashenka, as it distracts from the crimes he is committing against the citizens of Belarus. And there are more political prisoners in Belarus today than in Russia, and no European leader can at any meeting remain silent about the crimes of the criminal regime of Lukashenka – she recalled during the debate MEP Róża Thun, sitting in the EP on the benches of the liberal faction Renew Europe.

It is forbidden to talk either about the situation at the border or about the terror, violation of fundamental rights inside Belarus, because it is not either-or. This is the sum. Total casualties by Lukashenka, supported by Putin – she explained.

The victims are citizens of Belarus or other countries brought to this particular border. Is there anyone else who does not understand that only together, while respecting common European law, that only this European community can stop these cruel madmen? – asked the MEP rhetorically.

The situation at the border must not obscure what is happening in Belarus. Almost 1,000 people – political prisoners – are tortured in prisons by Lukashenka. They must be free, like the entire Belarusian people he said Andrzej Halicki, MEP from the Civic Platform.

Also Poles – Andrzej Poczobut, Andżelika Borys, or my young friend Siarhei Korshun. They must be free, and we must help them. We cannot turn our backs on them. The one who hijacks the planes is a terrorist. The one who causes the death of his own citizens or citizens of other countries is a criminal. The place of the terrorist and criminal is before the Criminal Tribunal in The Hague. And we must lead him there in solidarity – Halicki added.

We stand in solidarity with both the victims of the Lukashenka regime, who found themselves in a border trap, and the imprisoned and repressed Belarusian oppositionists. Only joint pressure on Lukashenka will bring the violence to an end and endanger the lives of innocent people – he stressed MEP Tomasz Frankowski (PO).

Videogames entered his life in the late '80s, at the time of the first meeting with Super Mario Bros, and even today they make it a permanent part, after almost 30 years. Pros and defects: he manages to finish Super Mario Bros in less than 5 minutes but he has never finished Final Fight with a credit ... he's still trying.
Previous Alekxander Zverev and Sophia Thomalla are a couple. It will be a turbulent relationship …
Next Sygic is the first GPS navigation system that detects road signs