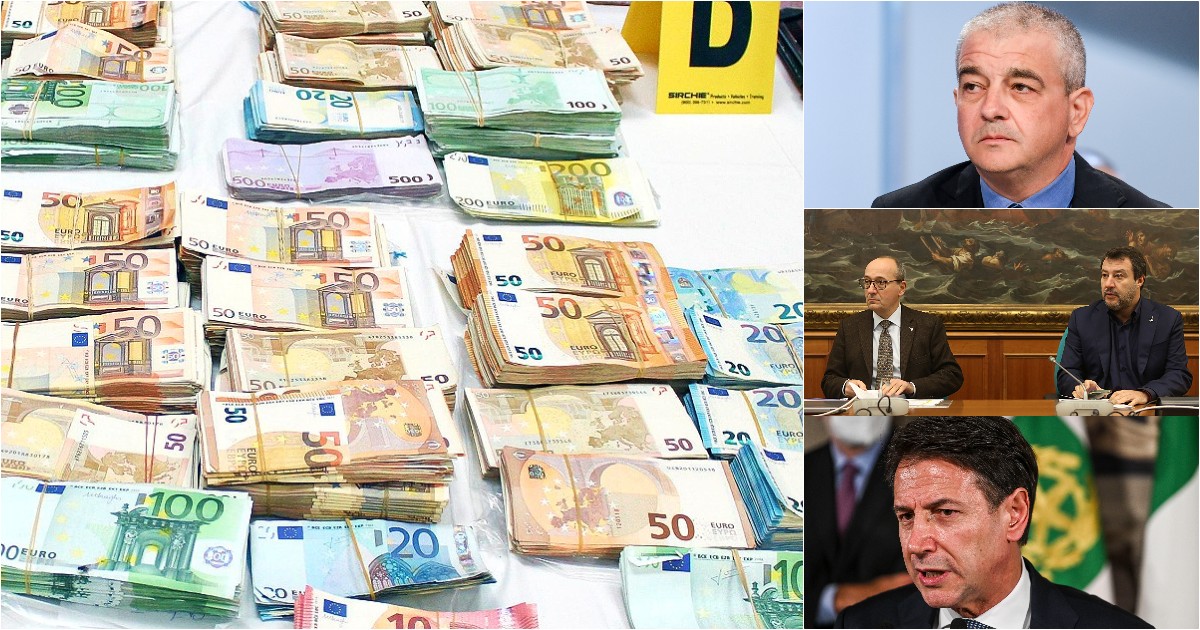 The first move of the Meloni government is a favor to the tax evaders: cash ceiling of 10 thousand euros. Fdi: will be in maneuver. Conte: “Bribes and briefcases are back in black”

Ready go. The government has not yet cashed in on the trust Senatebut he is already working to fight what he evidently considers an emergency for the country: to increase the ceiling on cash from two thousand to ten thousand euros. A measure that according to insiders – starting with Bank of Italy – favors tax evasion. Yet the increase of the cash money is a subject so dear to the majority that Brothers of Italy and the League they chase each other to claim paternity, offering a show that will probably be repeated during the entire duration of the executive.

The League’s proposal – In the morning, in fact, a note from Carroccio informed of the filing of a bill – first signature Alberto Bagnai – to raise the cash ceiling to 10 thousand euros. “Raise the ceiling on cash spending from the current ones 2 thousand to 10 thousand euros it is a common sense proposal of the League, in line with the program of the center-right and with other European countries: Less bureaucracy, more freedom “, he exulted on facebook Matteo Salviniwho is Minister of Infrastructure but does not give up on claiming the successes – or presumed so – of his party.

Fdi: Measurement in operation – Shortly after he arrived Giovanbattista Fazzolarithe most listened to adviser to Giorgia Melonito explain that “the increase to the cash ceiling has always been part of the FdI program, of the center-right, we will already first budget law “. According to Fazzolari, who is considered papabile as new undersecretary for the implementation of Programthe increase in the cash ceiling “has no connection with the fight against tax evasion. There is a fiscal respite as foreseen in the program. Those who have paid their taxes on time and in the manner will pay less and less than those who have not ”. The current cash threshold, set at two thousand eurowas doubled (the Conte 2 government wanted to bring it to a thousand euros) last February thanks to a blitz by center right.

EU: “A low limit is better for us” – He also intervened on the proposal Valdis Dombrovskisexecutive vice president of European Commission. “The Member States are free to decide autonomously “on the cash limit,” ranging from 500 euros in Greece to amounts exceeding 10,000 euros in some Member States, but it is clear that as a Commission we would prefer ceilings as low as possible“, He said during the press conference to present the measures on instant payments, answering a question about the objectives of the new Italian government.

Conte: “This is a favor to the shoulders” – To explain what the risk of increasing the cash ceiling is Giuseppe Conte, speaking at the Hall of Justice. “I ask young people above all: to your knowledge is there anyone who runs with 10,000 euros in cash? And if so, he is one honest person or a person who is related to ill deal. They’re doing the people a favorshoulder pads‘, those who go beyond the Alps to take our money into coffers. Is this how they want to improve Italian society? ”, Said the leader of the M5s. “They abolished the cashback – he continued – Draghi has done it unfortunately at the request of Meloni and Salvini, now complete the reform. Let’s go back to wadsat briefcases with in black cash inside. A decision that is paired with that of tax respite announced yesterday by Meloni, which is in fact an amnesty. They are saying to the citizens: dear honest people, you are fools, let’s reward the smart ones ”. Then on facebook the former premier added: “A study by Bank of Italy certifies that raising the cash ceiling helps tax evasion. There we will strongly oppose this measure. We do not want to promote malpractice and corruption. Instead, we are concerned with helping businesses, workers and families who do not know how to pay their next bill ”. The study cited by Conte is the paper Pecunia olet. Cash use and underground economy, signed by three researchers from Palazzo Koch, and is related to the effects of the increase in the cash ceiling at the time of the government of Matteo Renzi when, starting from 2016, the limit was raised to 3 thousand euros: that provision “has increased by 0.5 percentage points the share ofillegal economy “.

Pd: “It favors evasion and money laundering” – It also attacks the government Pdwith the economic manager Antonio Misiani which underlines how the proposal is “in total contradiction with what has been decided in recent years in Italy and in most European countries to progressively reduce the use of cash and push the traceability of payments and the fight against the shadow economy. Meloni in her programmatic statements quoted the fight against tax evasion among the objectives of the new government. If a good day starts in the morning (and from proposals such as that of the Lega on cash), Italy risks going in the exact opposite direction ”. Franco Mirabellideputy leader of the Democratic Party in the Senate, underlines instead that the initiative “if carried out, would make it more difficult to control the flows of money and would favorin addition to tax evasion, the money laundering“. According to Mirabelli “in a phase in which the mafias they try to infiltrate in the legal economy by investing money of illicit and criminal origin you make them a gift allowing you to move large amounts without any control. The fight against the mafias and illegality does not need declarations of principle but coherent acts and the increase of the money ceiling certainly would not be ”. The deputies of the Alliance are also against the measure of the government Greens and Left, Eleonora Evi And Angelo Bonellicalling it “a real gift to the mafiaswhich stimulates the money laundering, completely incomprehensible. Raising the cash ceiling from 1000 to 10 thousand euros would make it impossible to control the flow of money and would only encourage evasion ”. Even Carlo Calenda rejects the proposal by defining it as “one nice demented strategy to increase tax evasion“.

Videogames entered his life in the late '80s, at the time of the first meeting with Super Mario Bros, and even today they make it a permanent part, after almost 30 years. Pros and defects: he manages to finish Super Mario Bros in less than 5 minutes but he has never finished Final Fight with a credit ... he's still trying.
Previous Juve, four clues make it a test: the problem is the preparation, they say … the players
Next Pirates of the Caribbean, Zoe Saldana: “Jerry Bruckheimer apologized for my horrible experience on set”