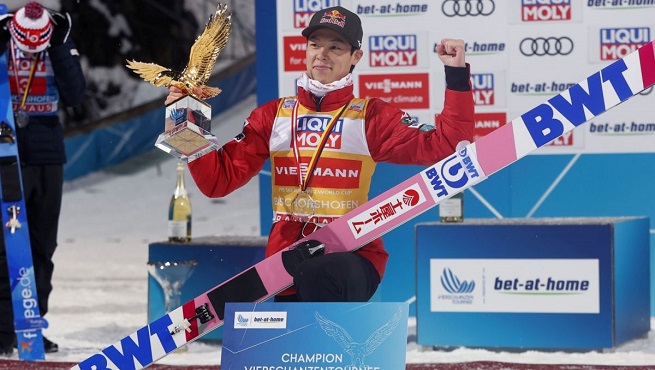 The 70th 4-Hills-Tournament was held from December 29, 2021 to January 6, 2022. In Poland, it was broadcast by two stations: TVN and Eurosport 1. The average audience of the sports event on TVN amounted to 2.01 million people. This translated into 16.89 percent. TV market share among all viewers, 16.08 percent. in the commercial group 16-49 and 16.85 percent. in group 16-59 – according to the data of Nielsen Audience Measurement, which was reached by the Wirtualnemedia.pl portal.

Comparing the viewership data with last year’s TCS edition, it shows that this year’s series had 3.22 million viewers less – even though the tournament was broadcast on three channels – on TVP1, TVP Sport and Eurosport 1. A year ago TCS was followed by a total of 6.13 million people at 43.63 percent participation in the 4+ group, 35.93 percent. in the group of 16-49 and 39.97 percent. in group 16-59.

On TVN 70, the Four Hills Tournament had 2.10 million viewers less than the previous edition broadcast on TVP1. In turn, the decrease in Eurosport 1 amounted to 440 thousand. viewers.

On TVN, the most popular competition was the Four Hills Tournament held in Garmisch-Partenkirchen, which was watched by 2.48 million viewers 4+ (20.39% share).

In Eurosport, 1 the largest audience – 1.05 million people – was gathered by the final competition from Bischofshofen.

Eurosport 1 also showed the qualifications for the competition, which was followed by an average of 719,000 people on the air of this station. people. The averaged audience for all eight TCS 2021/2022 broadcasts (four main events and four qualifiers) was 822 thousand. people.

Ryoyu Kobayashi became the winner of the entire tournament for the second time in history. Marius Lindvik and Halvor Egner Granerud also finished on the podium. The highest-ranked Pole – Piotr Żyła – was classified on the 15th place.

The 4-Hills-Tournament is the most prestigious cycle in ski jumping, the competition of which is also included in the general classification of the World Cup. The competitions are organized at the turn of the year in Germany (Oberstdorf and Garmisch-Partenkirchen) and Austria (Innsbruck and Bischofshofen).

David Martin is the lead editor for Spark Chronicles. David has been working as a freelance journalist.
Previous Lechia Gdańsk at a camp in Turkey
Next The representative of Armenia joined Pogoń. He was selected for the “11” round in Slovakia