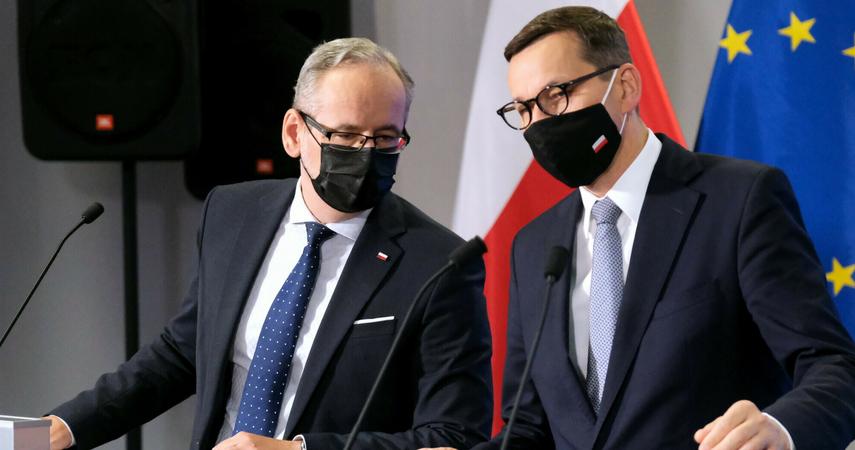 “The gene of opposition”. How the attitude of the government towards the restrictions has evolved

Since the fourth wave of the pandemic began to rise in Poland – we should emphasize that by the government – we hear from the rulers that there will be no stricter restrictions, because the current ones are sufficient. – We are culturally conditioned differently, for many years we have had the gene of opposition in our genes – said Deputy Minister of Health Waldemar Kraska, when asked about restrictions for the unvaccinated, introduced in many European countries.

– We only want to comply with those restrictions that are in force. If we were all to enforce the existing restrictions, these deaths could be avoided (…). We focused on inspections in public transport and large-format stores. If we do not enforce these restrictions, which are now in force, and we introduce new ones, they will not help us, said Deputy Minister Kraska on the RMF FM radio.

The fourth wave of the epidemic in Poland. Minister of Health: our procedure is working so far

We have been hearing similar statements about the need to comply with the applicable restrictions for weeks from politicians in the ruling camp. – Compliance with epidemic rules: keeping distance, wearing a mask, disinfecting and vaccinating are still important elements in the fight against COVID-19. We are not tightening the restrictions, we are focusing on the execution of those present – said Minister of Health Adam Niedzielski on Thursday.

See also: More than half of Poles are in favor of local lockdowns. 10 percent does not want any restrictions

Citing, for example, the Lubelskie and Podlaskie voivodeships, the Minister of Health on Thursday explained that not tightening the restrictions, and managing only the hospital base seems to be an appropriate solution. – It would be enough, I also say it with some expectation, to adhere to the basic standards. I’m talking about wearing a mask, keeping distance where possible, and keeping hands disinfected, said Adam Niedzielski.

– Of course, there is a level of infection at which we would have to take drastic measures, but the case of Lubelski and Podlasie so far shows that the procedure we implement is rational, pragmatic and has been working so far – he argued.

In Poland less than 54 percent were vaccinated. population, and over 1.4 million Poles took a booster dose.

“Why are these people dying? Because they are unvaccinated. It’s the choice of these people.”

Government spokesman Piotr Müller, asked on Thursday on TVN24 why the Polish government does not follow the path of other countries and does not limit public services for the unvaccinated, said that the option was adopted in which “places are created for people who are sick”.

– We help these people and try to leave the socio-economic life as much as possible, for social and economic reasons – said the government spokesman. He admitted that it was a dramatic choice. – Why are these people dying? Because they are unvaccinated. It is the choice of these people – he said.

Prime Minister Morawiecki, who in the summer passionately encouraged vaccination against COVID-19 and warned against an increase in infections, he also did not stumble in recent weeks about the tightening of restrictions on the unvaccinated.

On Friday, in his podcast, speaking about the current growth, he said that “this is an alarm that obliges us all to act and to comply with the restrictions that are already in force today.” – The coming days will be decisive for the development of the autumn wave of infections. Either we can stop it together, or we will allow an uncontrolled further increase in morbidity and deaths, he added.

Someone who has followed government statements on the pandemic – in spring and summer, following a devastating Third Wave – may feel surprised. The narrative has changed. In the next wave, there were to be restrictions with a thousand infections a day on a national scale, and there is a saying that the restrictions will not work now and covering up with protests in those countries that have decided to cut off from unvaccinated services or entertainment.

What the rulers said in the summer

– We are trying to encourage it on a voluntary basis to vaccinate against COVID-19, but if necessary, we will take restrictive steps in the next two or three weeks – said Prime Minister Morawiecki at the end of July this year.

For a long time, the rulers indicated that the decision on possible restrictions would depend on the level of vaccination, and the restrictions – if they are announced – they will be regional, not national.

– With over a thousand cases of COVID-19 infections daily in the country, we will begin to introduce restrictions. To begin with, in regions with the lowest number of vaccinations, Minister Niedzielski said at the beginning of August.

Last week, the COVID-19 team at the president of the Polish Academy of Sciences estimated that in the confrontation with the fourth wave in Poland, each of us was left to ourselves. “We are seriously concerned about the lack of a response from the state authorities adequate to the seriousness of the epidemic situation,” wrote the experts of the Polish Academy of Sciences.

As we have already written in Business Inside, in recent weeks and months many countries followed the path of France and Italy, which introduced covid passes and cut off the unvaccinated from places such as hotels, cinemas, dining outlets and gyms. This happened in the Czech Republic, Ireland, Wales, the Netherlands, Germany, Bulgaria, Slovakia, Sweden (in this country, passes only apply to events for more than 100 people) and Austria (Austria on Friday went even further and announced a lockdown nationwide on Monday and compulsory vaccination against COVID-19 from February. Until now, countries in our part of the world compulsory vaccination covered only certain groups, most often health care workers).

The Polish prime minister believes that this direction is ineffective. – We can see how little effective in Western Europe are the various restrictions, various penalties and restrictions that are implemented there. We see gigantic demonstrations in the West being broken up in a brutal way. We want to avoid it, so we are looking for the golden mean – said Mateusz Morawiecki on November 5.

Opposition politicians and some commentators accuse the governmentthat it yields to a relatively small group of voters – their own, those who do not want to be vaccinated; voters who oppose any sanitary restrictions and rules that the Confederation speaks with, as well as anti-vaccineers who are very active and publicized on social media and have organized many protests in the past.

– We did a survey which showed that both PiS and PO voters are equally opposed to certain restrictions, and the largest group that opposes them are, of course, the people who most often do not go to the elections, and of course the Confederation voters – said the deputy minister.

It is worth being aware that In almost every country where the government has decided to restrict the unvaccinated, there are anti-vaccine workers and parties whose voters are against the restrictions. In Austria, it is the far-right Austrian Freedom Party, which won 26 percent in the last election. votes and thus became the third power in parliament. In France, it is the Patriot movement, which organized numerous demonstrations against the covid passes during the summer, in Italy it is the neo-fascist party Forza Nuova, whose leaders were arrested after riots broke out during protests against the passes.

Opposition: The government is held hostage to part of its electorate

– We expect the government not to be afraid, not to be held hostage by part of his electorate, but that he would realistically implement the solutions known as the covid passport, i.e. those that minimize the risk of virus transmission, but also build a sense of security in the society – said Michał Wypij, MP from the Agreement on Wednesday. The group last week called for stricter rules for people unvaccinated against COVID-19.

The Left also appealed to the government to take action. – Unvaccinated people, if they want to use public institutions, cinemas, theaters, should also be required to have a test carried out within 48 hours – said the head of the Left club Krzysztof Gawkowski October 21. The left then asked the prime minister and the minister of health to organize a meeting on a strategy to combat the pandemic, but received no reply.

Members returned to the topic last Friday. – Today, the Law and Justice government focuses not on the fight for the health and life of Poles, but on the fight for good polls. There is a lack of courage and a lack of specific strategies, said Katarzyna Kotula, MP.

– Will Minister Niedzielski and Mateusz Morawiecki find the courage to say: “enough privileges for unvaccinated people”will they appreciate the courage and responsibility of those who have decided to vaccinate – Agnieszka Dziemianowicz-Bąk asked the MP.

In early October, the Minister of Health he said the peak the fourth wave should not exceed 20,000 cases. On November 20 and 19, over 23,000 were confirmed. cases (after performing, respectively: over 95 thousand and almost 94 thousand. tests), on November 18, almost 25 thousand. (with over 99.5 thousand tests).

Videogames entered his life in the late '80s, at the time of the first meeting with Super Mario Bros, and even today they make it a permanent part, after almost 30 years. Pros and defects: he manages to finish Super Mario Bros in less than 5 minutes but he has never finished Final Fight with a credit ... he's still trying.
Previous Iwanczyk: PZPN cuts the budget by 30 percent. No promotion to the World Cup is PLN 70 million less!
Next Wirtualna Polska – Everything important