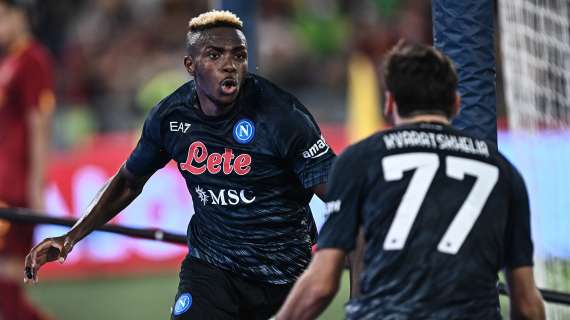 the humiliation to Meret, the obscene phrase of Mourinho, the torture of Osimhen and Karsdorp in delirium under the Curva

Napoli also beats Roma: monstrous Kim, a good performance by Olivera. Spalletti guesses all the moves and silences the Olimpico.

Zero shots in the mirror. Mourinho’s strategy is like that of Tarantino’s Bill at the height of his masochism: do not concede to Meret the possibility of redemption after the mistake of last week. Josè ‘humiliates’ Alex, with the usual catenaccione and not even half a shot to dirty the gloves: Vinted are already available, they are as good as new. A bargain.

One in Karsdorp, absolute star of the evening. After 11 ‘rejoices and charges the public for having won a lineout, from then on an inexorable collapse. He is pardoned for trying to engrave Hokuto’s 7 stars on Olivera’s face with his cleats, but Kvara sends him haywire in the final and ends up attacking the referee with the first case in the manner of a footballer who tries to push the referee and instead it pushes itself backwards. At the beginning of the night, lions, at the end of the night …

Two similar episodes, two different managements. In Florence, for the penalty awarded to Inter, Valeri he is not called to the Var to review the action. In Rome, however, Irrati goes to see him again and changes the decision from the field. It is difficult to explain how two similar cases are handled with such procedural differences and in the diametrically opposite final decision. Personal opinion: I wouldn’t whistle in either case. With one substantial difference: Napoli would have won anyway, Inter would have two points less. Injustices.

Three assists from Politano in the league. More than an assist, that of the Olimpico is an act of faith: a very long ball thrown, Osimhen eating three meters from Smalling and mocking him with his right-footed shirt. Matteo, without taking anything away from your polite foot, but we are all good at this: how to challenge Flavia Vento at the Certamen Ciceronianum Arpinas. Do you like to win easy.

Four seconds before the end. Irrati stops Napoli in attack, despite having also warned Lozano a few seconds before and therefore having to lengthen the recovery. The referees must STOP doing what he pleases, taking the rules and using it like an accordion flexing in their hands. It is not acceptable, among many subjective elements objective data must at least be protected. “How miserable is life in the abuse of power.”

Five out of six away wins. Lazio, Milan and Rome fall under the blows of a Napoli that seems to be trained like leather heads: there is no bunker that cannot be conquered. Competitions of suffering, of consistency with one’s own ideas, of always different protagonists: from Kvara to Simeone to Osimhen. How deep is the sea from which Spalletti can always draw new options. “Thinking like the ocean. You can’t block it. You cannot fence it “.

Six and a half tending to seven for Olivera, who tames the arrembante Zaniolo by opposing the same level of physicality. He does not back off Matias and even when he makes a mistake he also puts a piece in it unlike Jovanotti’s Lucky Boy. Compact as a cube, when the race is in battle he exalts himself like a Pooh fan when ‘Lonely men’ leaves at a concert: Matias with the aftershave that smells of rain and the solution always ready in the Briefcase.

Seven points ahead of Rome despite the obscene theater set up by Mourinho. The Josè Horror Show makes the verse, in a sad and yellowed version, at the Time Warp: do it, do it again and repeat it again. For 90 ‘he mimics surreal situations (he gets to ask Ndombele for the yellow for simulation), like someone who knows he has lost even before starting and rattles off obscene phrases after the race. The truth is that Josè was terribly afraid of this Naples, who bet on the strength of desperation to charge him. He has made the figure of the coward, who miserably faces an ineluctable fate. From Zero Tituli to Zero Tiri: ‘at the end of o juorno it’s all there.

Otto to Kim who protects us like Padre Pio on the dashboard. It is an invisible wall, the ozone that keeps the planet Naples safe and makes the area lighter and more breathable. He obscures the entire Giallorossi horizon, anticipates with the action the only thought of the rival: play a game that is placed in a different temporal space, as the Queen of Chess has in mind an anticipated projection of the game she is going to play. With the little voice in her brain that she echoes: “It’s your destiny, grab it.” Extraterrestrial take me away.

Nine to Osimhen’s psychological terrorism, which gets under the skin like a scratch with his bare hands on a blackboard. It is an exhaustion, for the opponents, to keep at bay someone who runs after every ball as if it were the last in life. There is a captivating fatalism in Victor’s obstinacy, who imitates an America’s Cup skipper on goal by turning as the sea takes you somewhere else, being stronger than the sea itself, mastering all the elements with that insane madness on which holds the number 9 of Napoli. It is Spalletti’s Mad Hatter, who goes around the field shouting “I’ll tell you a secret: all the best are crazy”. And big businesses are born from crazy ideas and crazy ideas need a dreamer who takes the wall of the possible to his head to access the room of the impossible. Come, I saw, (I broke everything) Victor.

Ten others, indeed many more. Osimhen marks, but it is only the appendix of a single body, the extension of the central unit called Naples and masterfully directed by Spalletti. There is no degree of separation in this osmotic process of growth, it is a formative story that is handed down with the enthusiasm of someone who knows he is a writer and a storyteller at the same time as a small business. A single block, carbon that is assembled giving life to a diamond that shines in the middle of the heart. You who are different, Naples. You, who have canceled the regrets, the remorse, the missed opportunities. That you have cleared all the impediments of the past. That it faces the only time that can be conceived: the present. Enthusiasm. Exciting. You leave us breathless, speechless, without other thoughts. Dictator of these days. Tyrant of our thoughts. It’s so good it doesn’t feel real.

David Martin is the lead editor for Spark Chronicles. David has been working as a freelance journalist.
Previous Resident Evil Village Gold Edition Review between third person and mercenaries
Next The lesson that comes from London- Corriere.it