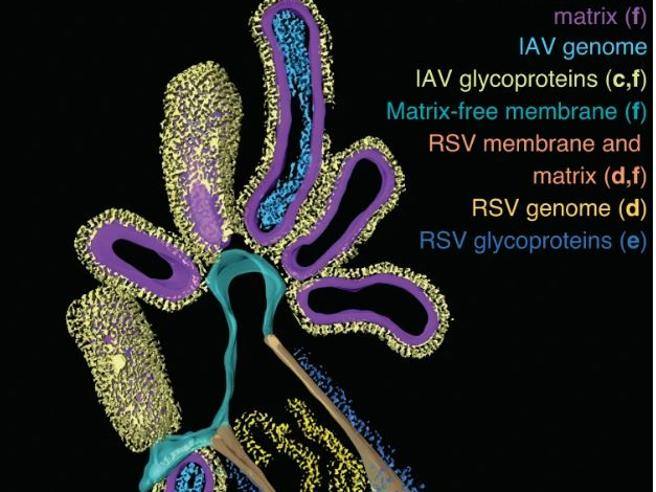 “The hybrid virus that blends influenza and RSV is capable of evading the immune system”: the study- Corriere.it

Researchers from the University of Glasgow have discovered in a laboratory experiment that the two pathogens join forces to infect more lung cells.

Two common viruses, influenza A and respiratory syncytial virus (RSV) can merge And form a hybrid virus able to evade the immune system And infect lung cells. The experiment was done in the laboratory and it is not clear whether the fusion can also occur in nature and can involve other viruses: the researchers believe it very likely. The study, led by an international team led by scientists from the University of Glasgow’s Center for Virus Research, was published in Nature Microbiology and scientists believe the discovery could explain why co-infections can cause more serious diseases in certain patients, with life-threatening pneumonia.

Approximately every year 5 million people worldwide are hospitalized with influenza A.
while respiratory syncytial virus (RSV) is the leading cause of acute lower respiratory tract infections in children under five and the elderly and can cause serious illness. The syncytial virus causes over 420,000 hospitalizations every year and 29,000 deaths among adults in industrialized countries (a vaccine for the elderly is being studied).

How the hybrid virus was born

Co-infections (when a person becomes infected with both viruses at the same time) are thought to be not uncommon, but it is unclear how the two viruses interact with each other. To find out, Dr Joanne Haney and colleagues at the Glasgow research center deliberately infected human lung cells in the laboratory with influenza A viruses and RSV and discovered, to their surprise, that instead of competing with each other as they would expect and as other viruses do, they have merged to form a new hybrid virus palm-shaped, with the RSV virus positioned on the trunk and the influenza virus on the leaves, as observed with very high resolution microscopes. This type of hybrid virus has never been described before – commented to the Guardian Pablo Murcia, supervisor of the work – and we are talking about viruses from completely different families that combine with the genomes and external proteins of both viruses. It is a new type of viral pathogen.

The researchers were able to observe how the hybrid virus was able to infect neighboring cells even in the presence of the antibodies against the flu that would normally block the infection. Although the antibodies bind to the flu proteins, counteracting it, the RSV proteins have been able to defuse the immune defenses and infect lung cells. THE two viruses together manage to evade the immune system but their alliance may also allow them to reach a wider range of lung cells: while influenza usually infects cells in the nose, throat and trachea, RSV tends to prefer cells in the trachea and lungs. .

Videogames entered his life in the late '80s, at the time of the first meeting with Super Mario Bros, and even today they make it a permanent part, after almost 30 years. Pros and defects: he manages to finish Super Mario Bros in less than 5 minutes but he has never finished Final Fight with a credit ... he's still trying.
Previous The Marvels: Brie Larson wishes Iman Vellani a happy birthday
Next WhatsApp down throughout Italy, the messaging app is back to work after two hours of blocking