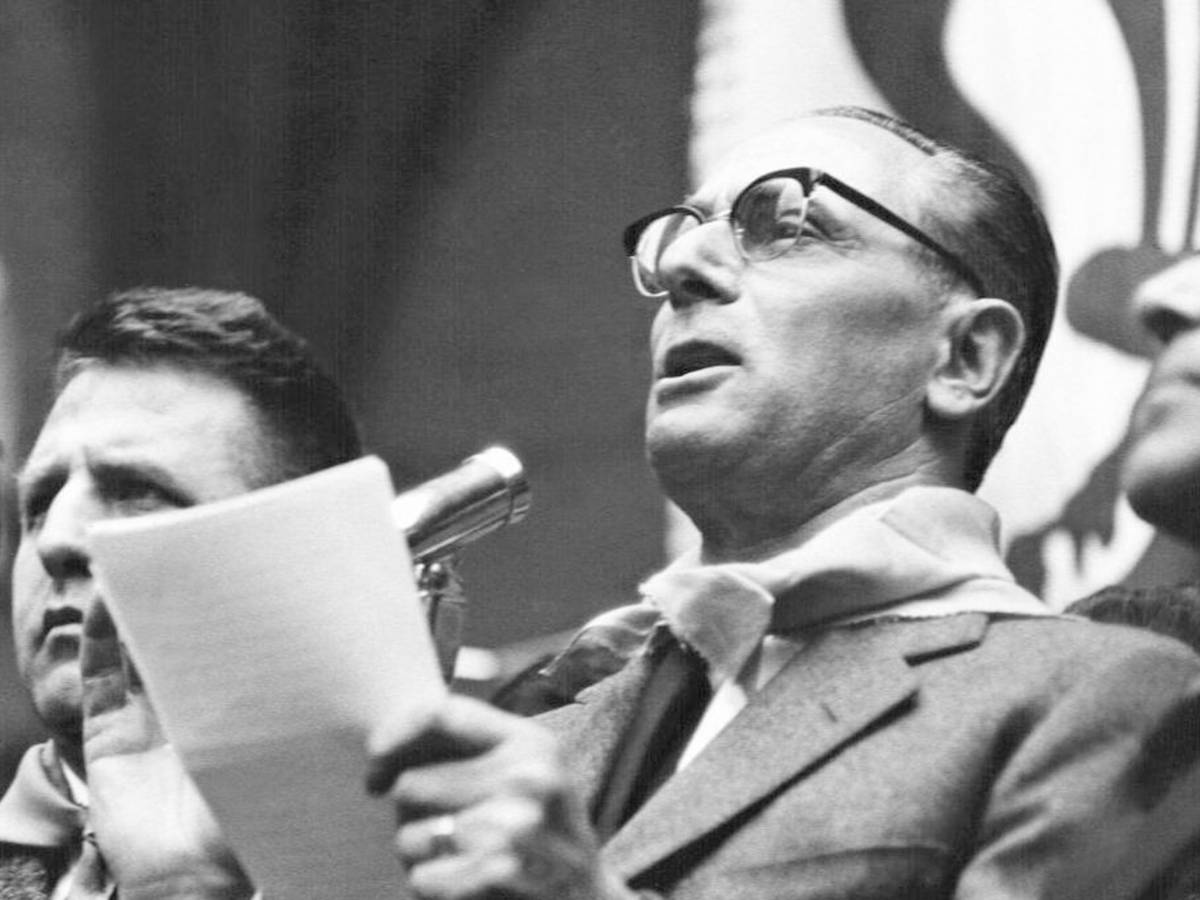 The latest interview with Francesco Forte: “Mattei victim of a premeditated attack”

In July 2021 I started writing a book about the many encounters I had with the great Italian figures of the twentieth century. And after a good collaboration, with a valuable introduction to my book A step behind Craxi (Edizioni We), I asked the professed and senator Francesco Forte to be able to ask him some questions about a man he had known closely and who still continues to leave not only a great mystery about his death but also a great economic and political legacy. The reference is obviously a Enrico Mattei, founder of Eni, also mentioned in the inauguration speech by Prime Minister Giorgia Meloni. Professor Forte, with the kindness that distinguished him, did not hesitate to answer my questions. Upon his sudden death, I had decided to leave this unprecedented interview in the drawer pending future publication. But the renewed interest in a key figure of our nation convinced me to anticipate it, and to bring it out today, October 27, 2022, exactly sixty years after the tragic plane crash of Bascapè. Therefore, I may be allowed to send an affectionate thought to Francesco Forte, a lucid and brilliant mind that Italy lacks.

Professor Forte, how do you become Enrico Mattei?

“We need entrepreneurial skills, which Mattei has created starting from a small business in the Marche region, and a lot of tenacity”.

Was he so unscrupulous in his way of conducting business that he brought him not close but directly to death?

“Mattei was the victim of a premeditated attack, carried out by the OAS, a diverted Franco-Algerian secret service, in order to prevent Eni from operating in Algeria, with a global agreement, regarding Algerian gas”.

Had postwar Italy sensed his farsightedness?

“Mattei’s foresight and Eni’s modernity – of which I have been an economic consultant since its foundation, Gino Giugni was the expert for personnel training – was well known and created many political opponents and many denigrations, while it had been understood by the large American multinationals, who had decided to ally with Eni. On the plane in which he perished, there was only an American journalist, who was interviewing him in relation to the agreements that Mattei would make with the seven oil sisters. No Eni executive was on that plane, because we all knew that starting from Sicily the mafia could sabotage it. So all those who had gone up there on the way, from San Donato Mianese, for the inauguration of the new and modern Eni refinery in the Sicilian port, remained with one pretext or another in Sicily and then returned with airliners ”.

What were the relations between De Gasperi and Mattei? And how did he remain politically linked to the DC after the death of the statesman from Trentino?

“Mattei had a particular relationship with Ezio Vanoni, who, in turn, De Gasperi had chosen as his minister for Finance and Economy, having met him in 1943, when the Code of Camaldoli was drafted. I was hired as an economic expert, despite my 25 years, both because I had written essays on the taxation of petrol, diesel, lubricants, car tax as a shadow price for the use of roads and on tolls for the use of motorways. , both because Vanoni’s student and substitute for his chair of Finance at the University of Milan. Mattei had been head of the Christian Democratic partisans in Val d’Ossola and was the representative of the DC, in the five partisan leaders, who paraded in Milan on 25 April, with Pertini for the socialists, Longo for the communists, General Cadorna for the army of the Kingdom of Italy, whose provisional government was then in Bari ”.

Montanelli defined him as “the one who had legalized the bribe”.

“The term is correct, but with a play on words, it suggests that it is a question of illegality that has become a political custom. Instead Eni made regular contracts with the legal representatives of the oil countries for the use of their wells and the exploration of the territory. They usually cost 3% and were reported to the Italian Exchange Office to allow the legal export of capital. For Russian gas in the 1970s, Eni paid a higher%, because a share went to the PCI and there was an amnesty that remedied its irregularity ”.

From the liquidation of Agip he invented Eni and began to compete with the big names in the sector.

“Agip, when Mattei took it, had the maps with the results of the oil explorations, which it had done, in Libya (without success), in Croatia and its surroundings with limited success, but a harbinger of development, and in the Edolo mountains where the so-called charcoal was found, which is dry tar, a sign of petroleum, which suggested that there was oil in Northern Italy. The oil experts were aware of it and Mattei had asked to be the head of Agip because he knew it, while the others thought that he had done it because he had the petrol and diesel distribution network. The drilling brought to light little oil, in Cortemaggiore and a huge reserve of gas in the Po Valley and oil in the Novara area, under the Alps “.

Among Mattei’s famous jokes there was an extraordinary one: “I’m not thrilled to go into a shop to pull down the shutters”.

“Which meant that he was an innovative manager, like the many that arose in Italy at the time. Mattei had enrolled at the Catholic University, Faculty of Economics, with the principal Marcello Boldrini, an illustrious statistician, born as Mattei in Matelica, in the Marche region. And Mattei, who had the cult of professors of economics, put Professor Boldrini at the head of Agip ”.

How did big finance, from the Agnellis, Falck to Pirelli, look at Mattei?

“Gianni Agnelli, whom I personally knew, admired him and considered him an ally for the made in Italy of the car. In general, however, the heads of the electrical and chemical companies, which were important in finance, opposed him as a dangerous rival ”.

The hostility of Italian politics, as it was with many greats of capitalism, led him to take a “piece” of DC and to found a newspaper, The dayled by Baldacci.

“Since all large private companies had a newspaper, Mattei did the same, to defend himself, and chose Gaetano Baldacci, an innovative journalist”.

What portrait do you make of Gaetano Baldacci? And how The day from 21 April 1956 revolutionized journalism?

“Baldacci he had a dark political past, but he could make newspapers of any address. Thanks to an exceptional team, which she was selected by the CEO. He launched the first American-style newspaper, bringing together a group of groundbreaking journalists, starting with Gianni Brera for Sport to Giancarlo Fusco for humor to Umberto Segre for Foreign Affairs. The day it also had the ‘economic page’, an absolute novelty for Italy. They found no economic journalists. A week before going out on newsstands they took me as a part-time substitute teacher, as I wrote in the weekly Mercuryarticles with the rubric Alice in the country of budgets. Segre, who was doing the Foreign Affairs column, asked me to lend a hand temporarily and ENI also asked me, reducing my other commitments. The day he was center-left, I was a Social Democrat already as a university student. After three months, not finding a suitable economic journalist, they asked me to stay. In the meantime Massimo Fabbri, a professional journalist who did the stock market columns, had learned to make the economic page and became its director, I only did the fund. Baldacci apparently did business by publishing articles of interest groups, in exchange for money and was replaced by Italo Pietra, a professional journalist who gave him the address to the economic part “.

Why did you find much resistance in Mattei’s industrial projects more than abroad in Sicily? Did local politics and the shadow of the Cosa Nostra get in the way of his expansion plans?

“In my opinion and in the circles of the various Eni sectors with which I had contact, one had the impression that there was an intertwining between local politicians, the mafia and interests of French circles. Not necessarily controlled by the French government, which influenced our contacts in Sicily in politics and in local newspapers and of which it was understood only that Eni was opposed by the Cosa Nostra, but with ties to unknown interests, certainly not the American multinationals, with which Eni had by now a compromise ”.

“After Mattei’s death, Eni realized that nuclear power would not replace oil and petrochemicals and that there were alternative energies. So the economics of nuclear power appeared increasingly doubtful while the problem of radioactive waste was magnified and Eni became opposed to nuclear power while Enel and the others supported it by saying that it was hindered by Eni, in which I was now studying all alternative energies, including oil shale, from which the US now derives a large part of the gas ”.

What were the links between Eni and the countries of the Middle East?

“There were alternating relations with the countries of the Middle East, depending on the group that was in power and on the fact that Iran and Iraq were rivals and that Eni had found oil in Egypt and in an area disputed by Israel. In general, Eni had excellent relations with small oil countries, such as Kuwait. The Eni fifty-fifty formula in which half is owned by an Eni oil company together with a minority local oil company, facilitated the persistence of collaborative relationships “.

How did the CIA view Mattei’s activism?

“As far as I know, the CIA liked Mattei in Africa and the Middle East and in particular in Libya and Tunisia. It was not welcome in Russia as this created a dependence on the USSR and financed the PCI. But on Russia, the CIA, from the time of Asian communism, played a double game ”.

You have privately and institutionally met figures of the caliber of Craxi, Andreotti, Fanfani etc… how would you define Mattei?

“An innovative entrepreneur who loved Italy, but also poor third world countries, and conceived public enterprise as a market enterprise”.

Videogames entered his life in the late '80s, at the time of the first meeting with Super Mario Bros, and even today they make it a permanent part, after almost 30 years. Pros and defects: he manages to finish Super Mario Bros in less than 5 minutes but he has never finished Final Fight with a credit ... he's still trying.
Previous Lazio, Milinkovic and the renewal issue: Lotito dissolves all doubts
Next Round eyes: how to enhance them with makeup