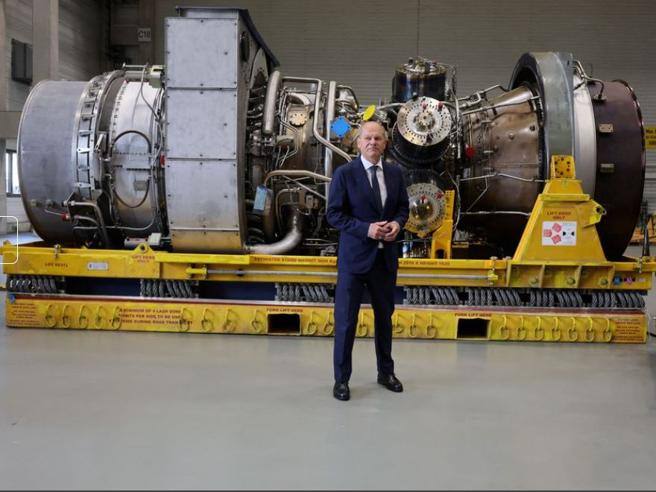 The mystery of the turbine and the (successful) blackmail of Russia against Germany on gas – Corriere.it

Berlin agreed to a step backwards on sanctions but that was not enough: Moscow reduced supplies even further. He’s upping the ante, aiming to open Nord Stream 2

On Tuesday Olaf Scholz was posing in a small town in northwestern Germany, Mlheim an der Ruhr, for the strangest of photos. Behind the German chancellor, not smiling at all, there was a work of high engineering around which an international thriller is being consumed in which nothing is as it appears. Why Western governments are bowing to Russian blackmail more than they dare to admit. And the Kremlin is upping the ante, to arrive at a political target that goes beyond what was imaginable even just a few weeks ago: the opening of Nord Stream 2, the new infrastructure between Russia and Germany which on February 22 was the object of the first and most symbolic of the Berlin sanctions against Moscow. But let’s go in order. The work in front of which Scholz had an A65 turbine painted and is part of a series that Siemens Energy has sold to Russian gas producers in four more or less powerful models for the Nord Stream 1 gas pipeline, probably as many for Nord Stream 2 and various others including one now illegally installed – against the will of the German supplier – in a Ukrainian gas network in occupied Crimea.

The chancellor was in Mlheim because that turbinebelonging to the Nord Stream 1 gas pipeline connecting Russia to Germany via the Baltic, remains blocked after many adventures. Gazprom had long ago sent it back to Siemens Energy for maintenance in the Montreal (formerly Rolls-Royce) plants of the German group. Subsequently, in June, the Russian gas monopoly had reduced supplies via Nord Stream 1 by around 40% (from nearly 1.2 billion to less than 480 million cubic meters per week): claimed he could not do more due to European sanctions preventing Siemens from returning the A65 turbine to Russia.

At that point the German government, very concerned, convinced the Canadian government to grant a permit that suspends the sanctions and should therefore allow the Siemens piece to be sent back from Montreal to Germany and from there to the St. Petersburg Oblast (from which Nord Stream 1 branches off).
The decision arrived from Ottawa on the evening of Saturday 9 Julydefined by the Minister of Natural Resources as time-limited.

Are you all right then? No, because Gazprom continues to argue that it cannot receive the turbine anyway because of the bureaucracy imposed by the sanctions. The piece therefore remains blocked in Mlheim, in North Rhine. Since the second half of July and until today, the Russians have been using that argument to further reduce supplies of Nord Stream 1 to 270 million cubic meters per week – just over a fifth of normal – raising the risk that the Germany will fall into an energy and industrial paralysis next winter.

The tension in the government and among German industrialists is now very high: Berlin has agreed to a step backwards on sanctions but it was not enough, because Russia is upping the ante. Till where? Here the yellow part of the turbine in which nothing as it appears counts more and more. Because, in the first place, suspension of sanctions not to be as it appears. In all probability, in fact, it does not concern a single turbine and a single moment in time but – according to various informed people – extends for two years and covers the maintenance of six turbines.

This is surprising for several reasons. In the first place the German government has declared its intention to stop supplies from Russia as soon as possibletherefore, it appears contradictory that it is concerned with asking for and obtaining exemptions from Canada on sanctions for the Gazprom network until mid-2024.

Secondly, Nord Stream 1 has only four Siemens turbines, but the exemption from penalties covers as many as six turbines and thus raises the hypothesis that it also intends to cover other gas infrastructures between Russia and Germany. Transparency in this affair remains very low. The Corriere has asked the Canadian government several times for three days for the legal text of its exemption and a clarification on its duration. A spokesperson said he was working on the request but never responded. A Siemens spokesperson noted that any future maintenance work (at the Montreal headquarters, ed) can be facilitated by the exemption granted by the Ottawa government. But he replied with a no comment on the request for confirmation on the two-year duration of the suspension of sanctions.

Even the president of the World Ukrainian Congress, the Canadian Paul Grod, did not have access to the bill of the Canadian government: it remains classified.

Now for the ball in the field of the Russians, because this backtracking on sanctions in the face of gas blackmail is not enough for them: Gazprom has reduced supplies even more, instead of increasing them. The Kremlin wants more and it is now clear what it is aiming for. After meeting Vladimir Putin, the former chancellor Gerhard Schrder (who continues to work for Gazprom) has made it known publicly that everything would be solved if only Berlin agreed to open Nord Stream 2. Before him, Mikhail Ulyanov, the Russian ambassador to the international organizations in Vienna, sent the same message. On this request, a heated debate opened in Berlin in the SPD, the party of Chancellor Scholz. Thus, with the blackmail of gas, Putin tries to obtain from Germany the most blatant of political capitulations.

Videogames entered his life in the late '80s, at the time of the first meeting with Super Mario Bros, and even today they make it a permanent part, after almost 30 years. Pros and defects: he manages to finish Super Mario Bros in less than 5 minutes but he has never finished Final Fight with a credit ... he's still trying.
Previous TS – Inter are convincing themselves to sell Casadei. “20 million? It can also be closed for less “
Next Kylie Jenner and Travis Scott take their daughter for a family night in London: ‘Date’