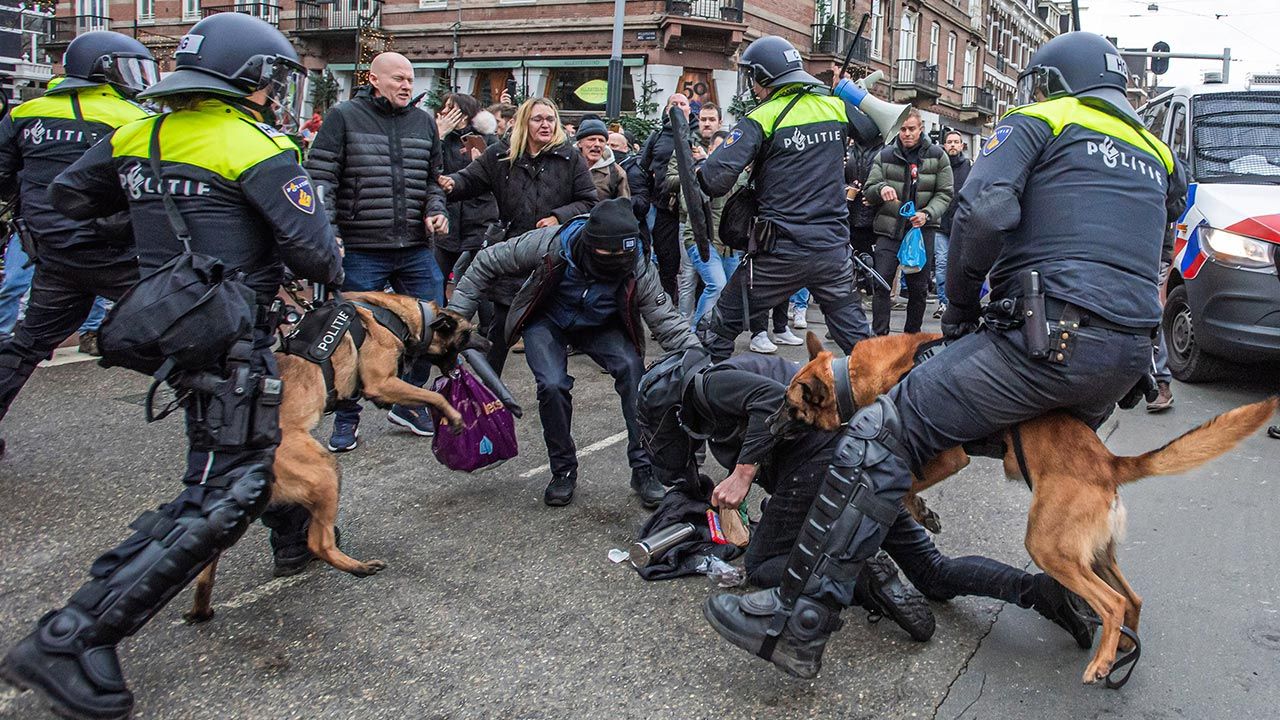 The Netherlands. A manifestation against sanitary restrictions due to the COVID-19 pandemic. Police brutality and the problem with the rule of law. Demonstration participant bitten by a police dog

Social media circulated a video showing a police dog biting a participant in a demonstration against sanitary restrictions in Amsterdam. The incident was referred to by Internet users who criticized the brutality of Dutch police officers towards Dutch citizens. The demonstration on Sunday was illegal; the capital city authorities did not consent to it.

The police brutally beat the opponents of the restrictions. “Dutch Zomo” [WIDEO]

There was a demonstration in front of the parliament in The Hague against the restrictions related to the coronavirus epidemic. There were clashes with the police; part…

An illegal demonstration of opponents of the government’s policy to combat COVID-19 took place in Amsterdam on Sunday. At its peak, 10,000 people protested at Museumplein, according to city officials. people. After 1.00 pm, the mayor of Femke Halsema issued an order to terminate the demonstration and the police forced protesters to leave Museumplein. Reinforced police forces equipped with water cannons appeared on the spot.

During the demonstration, there was a clash with policemen who were supported by military police units (Koninklijke Marechaussee). Videos circulated around social media showing a police dog biting one of the demonstrators, and security forces dispersing the crowd. According to NPO Radio 1, a participant of the demonstration bitten by a dog is in a hospital. After he leaves, he will be arrested on suspicion of attacking the officers.

Four policemen were hospitalized, it is still unknown how many protesters were injured.

A police car was on fire, the police were shooting at the protesters. Chaos in the Netherlands [WIDEO]

The evening protest in Rotterdam against covid restrictions turned into riots. In the night from Friday to Saturday, the intervening police …

Thirty participants were detained. Nine people were charged with assaults on police officers and illegal possession of weapons. The remaining detainees were released home on Monday, but this does not mean that they will not be punished. They will be brought to trial at a later date. The most aggressive of the detained remained in custody.

Comments appeared on the internet; Internet users also published a recording from March 2021, which is to prove that since then, nothing has changed regarding the brutality of Dutch officials towards citizens participating in the protests.

In the opinion of social media users, Niederlandy have a problem with the rule of law. Police versus Citizen. The Netherlands. What do Commissioner Timmermans and Prime Minister Mark Rutte say?? ” – Samuel Pereira, head of tvp.info, wrote on Twitter. Timmermans has been one of the executive vice-presidents of the European Commission since 2019, and Rutte has been Prime Minister of the Netherlands since 2010.

“The Netherlands bans demonstrations and breaks the right to freedom of assembly, then massacres people with clubs and pisses with dogs. Brussels comment: There is no rule of law in Poland, wrote Samuel Pereira.

The Netherlands bans demonstrations and violates the right to freedom of assembly, and then massacres people with clubs and pisses with dogs.

Brussels comment: There is no rule of law in Poland. https://t.co/elZZPO39gr

In the Netherlands, democracy is blooming like tulips. https://t.co/Akil1LgBmv

The rule of law in the Netherlands is beating the eyes. Not what we have, backwater. https://t.co/9xHNctmQ0e


“Participants in an illegal protest torn apart by police dogs and beaten with truncheons in Amsterdam, the Netherlands. If it had happened in India, it would have made headlines all over the world, ”commented an Indian netizen on Sunday.

Unauthorized protestors torn apart by police dogs and beaten with batons in Amsterdam, Holland. If it was in India, it would have been front page news all over the world, with local puppets joining their Western and Chinese masters to complain about human rights abuses. pic.twitter.com/aFhxutNWsf

There are also other videos on Twitter that you can see Dutch police brutality.

Police integrity died in Amsterdam today as officers shield bashed and beat an elderly man and a woman in the name of public health. pic.twitter.com/lrhgJLlAjL

Videogames entered his life in the late '80s, at the time of the first meeting with Super Mario Bros, and even today they make it a permanent part, after almost 30 years. Pros and defects: he manages to finish Super Mario Bros in less than 5 minutes but he has never finished Final Fight with a credit ... he's still trying.
Previous Sensation for the opening of the tournament in Adelaide! Maria Sakkari’s problems
Next “FAZ”: The EC’s decision is a blow to Germany’s climate policy