The 2022 Nobel Prize in Chemistry was awarded to Carolyn R. Bertozzi, Morten Meldal and K. Barry Sharpless «for the development of“ snap chemistry ”and bioorthogonal chemistry».

Barry Sharpless and Morten Meldal laid the foundations for a method of synthesizing complex substances in a simple and rapid way, with a mechanism that allows smaller molecules to be joined together: click chemistry. Carolyn Bertozzi then integrated that technique to apply it in living organisms.

Nature has always been the primary source of inspiration for chemistry, with its molecules elaborated and specific to perform functions, in the smallest and simplest organisms and in the most complex animals. Over time, their structure has been imitated by chemists to produce new molecules, which have saved millions of lives with drugs, for example, but imitating nature is not easy, requires great resources and often leads to bitter defeats.

Especially in the twentieth century, chemists developed rather sophisticated tools and systems to create complex molecules, building them step by step, gradually adding new complications. It is a difficult process and often leads to the production of side products, which must be removed before moving on to the next step, sometimes with removal activities that leave very little of the molecule being worked on. The three people awarded with the Nobel have made a very important contribution to reduce these difficulties, making the construction of certain types of molecules easier and more immediate.

Barry Sharpless, who had already received a Nobel Prize in Chemistry in 2001, was among the first to understand that there could be an easier way out. Twenty years ago he wrote an article arguing that a new, simpler and more minimalist approach to chemistry was needed. Sharpless took as an example the bonds between carbon atoms, the basic element of life as we know it. Living beings have a scaffolding based on carbon atoms linked together, but reproducing these bonds in the laboratory is not always simple and often requires numerous processes, with unwanted intermediate reactions and the use of expensive substances.

Sharpless hypothesized that instead of continuing to force the carbon atoms to react with each other, it was more logical to work with molecules that already possessed the desired bonds, joining them together using atoms of other elements, such as oxygen or nitrogen, much easier to hold under. check. Adopting this method would have made it possible to reduce unwanted reactions and material loss.

He called this intuition “snap chemistry” because he imagined it could be achieved by joining prefabricated blocks together. In this way it would not have been possible to obtain exact copies of the molecules existing in nature, but molecules capable of performing the same functions would have been created anyway. In his article Sharpless also specified that the reactions of the snap chemistry would have to be carried out in the presence of oxygen and in water, in order to use a substance (solvent) that is cheap and not harmful to the environment.

From the proposal it was necessary to pass to practice in order to have a system that could be used on a large scale, and the often cross paths of science would lead in a short time to a solution.

In the first years after the 2000s, Morten Meldal was exploring various approaches to develop new molecules for use in the pharmaceutical field. Together with his research group, he had created a sort of large archive to catalog thousands of substances and verify if they could be used to block viruses, bacteria or other pathogens. It was during a routine activity that Meldal noticed that a specific chemical reaction (copper (I) catalyzed azide-alkyne cycloaddition) had the potential to create bonds in numerous types of molecules. Sharpless had meanwhile published a study on the same reaction, dedicating himself to its use in water and defining it as “ideal” for use in snap chemistry. 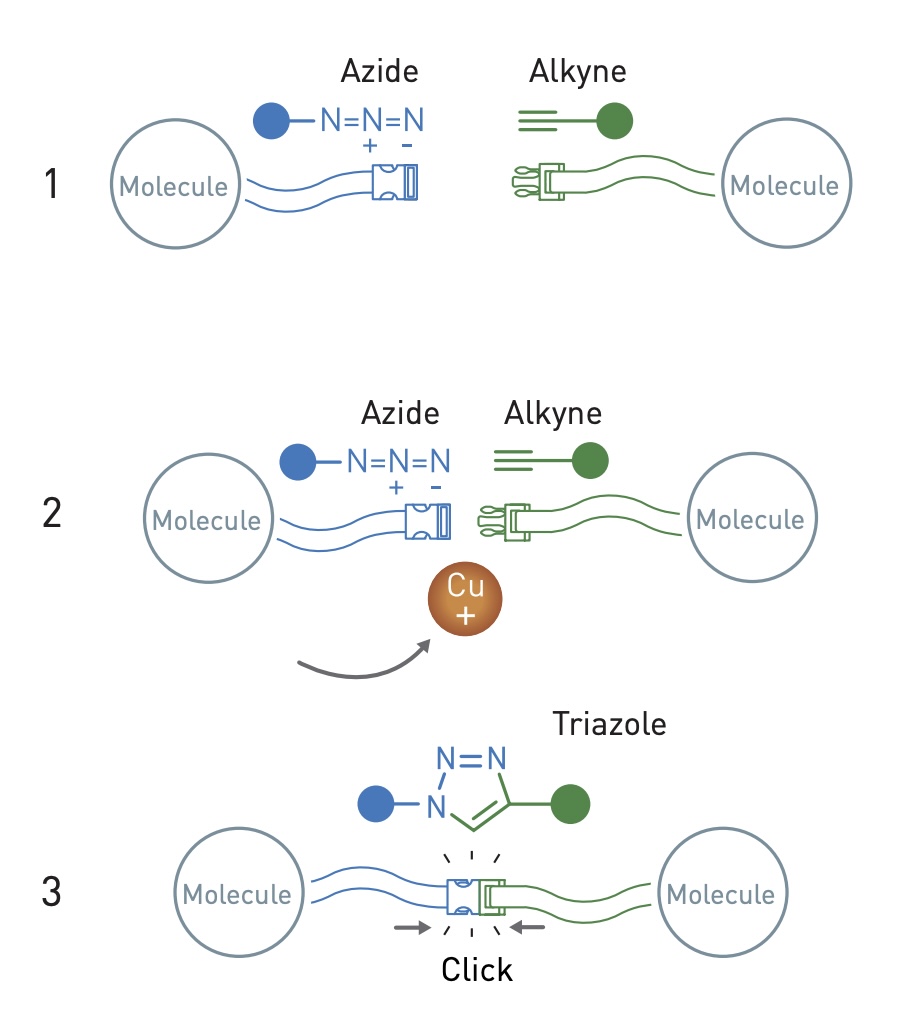 Azides and alkenes react efficiently when copper ions are added (CU +, in the illustration): it is the basis of the reaction used to produce molecules relatively easily (© Johan Jamestad / Royal Swedish Academy of Sciences)

In the following years, the reaction would have shown its potential, becoming a tool widely used in research centers, especially for the creation of new specific materials to perform certain functions. A plastic material can for example be modified with snap chemistry to protect it from ultraviolet radiation, or to add antibacterial capabilities. The system is also used in the pharmaceutical sector in the development and testing phase of new molecules, which could one day become drugs.

The subsequent development of the new technique came in 2004 with an important study published by Carolyn Bertozzi, who after many years of work had managed to demonstrate how snap chemistry could be used without resorting to copper. This variant opened great possibilities for the use of the technique also in living beings, avoiding the risks associated with the toxicity of copper. In the following years Bertozzi would have further refined the techniques making it possible to use them directly between cells.

Bertozzi’s studies focused mainly on cancer cells, discovering that some substances are able to shield this type of cells from the immune system, which therefore cannot neutralize them. The discovery made it possible to develop an enzyme-based drug that inhibits those substances (glycans) making cancer cells visible to the immune system again. A drug based on this principle is undergoing clinical testing on cancer volunteers. Other research groups are working on developing similar solutions, but it will take time to evaluate their effectiveness.

Videogames entered his life in the late '80s, at the time of the first meeting with Super Mario Bros, and even today they make it a permanent part, after almost 30 years. Pros and defects: he manages to finish Super Mario Bros in less than 5 minutes but he has never finished Final Fight with a credit ... he's still trying.
Previous Moody’s: Italy’s rating cut to “junk” likely without reforms
Next on the big screen for 60 years – RSI Swiss Radio and Television