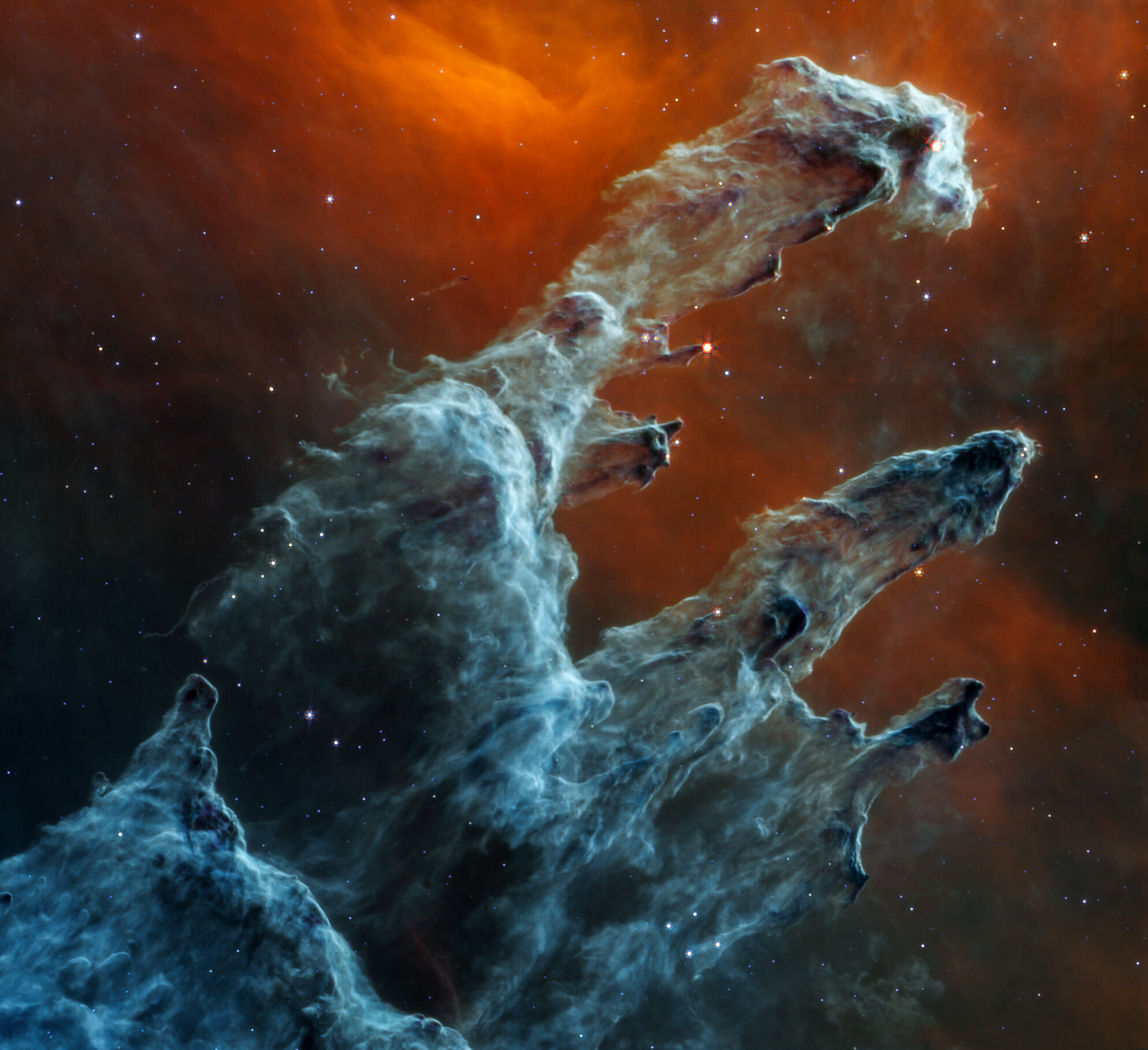 The Pillars of Creation in great shape

This is not an arcane landscape of forgotten tombs from time immemorial. They are not even sooty fingers reaching out towards us. These pillars, filled with gas and dust, “imprison” stars that have been slowly forming for several millennia. The NASA / ESA / CSA James Webb Space Telescope has taken this striking, dust-encrusted image of the Pillars of Creation in the mid-infrared range – giving us a new perspective on a familiar landscape.

Why does mid-infrared light create such a dark and chilling atmosphere in the image of Webb’s Miri (Mid-Infrared Instrument)? Interstellar dust cloaks the scene. And while mid-infrared light allows for precise detection of dust, stars at these wavelengths are not bright enough to be visible. Instead, these looming pillars of gas and dust, with their leaden hues, glisten at the edges, letting the activity that takes place within them leak out.

Thousands and thousands of stars have formed in this region, and this is evident when you look at the recent image of this object taken by Webb’s NirCam (Near-InfraRed Camera) (an interactive version is available). In Miri’s image, most of the stars appear to be absent. How come? Many newly formed stars are no longer surrounded by enough dust to be detected in mid-infrared light. Miri, therefore, only detects those young stars that have not yet shed their dusty “mantle”. They are the crimson spheres found at the edge of the pillars. By contrast, the blue stars that dot the scene are aging, which means they have shed most of the gas and dust layers.

Mid-infrared is excellent for observing gas and dust in great detail. This aspect also appears unmistakable in the background. The densest areas of dust take on the darkest shades of gray. The upward red region, which forms a curious ‘V’, similar to an owl with outstretched wings, is where the dust is diffused and colder. It can be seen that no galaxies appear in the background: the interstellar medium in the densest region of the Milky Way’s disk is too charged with gas and dust to allow their distant light to penetrate.

How vast is this landscape? We follow the tallest pillar and come to the bright red star that protrudes from the lower edge. Here: this star and its dust envelope are larger than the size of our entire Solar System.

This scenario was first captured by the NASA / ESA Hubble Space Telescope in 1995 and again in 2014, but many other world-class observatories have also observed this region in depth, such as the ESA Herschel Telescope. Each advanced tool offers researchers fascinating new details about this star-studded region. With each new observation, astronomers and astronomers gain new information and, thanks to ongoing research, are able to understand this star-forming region more fully. Each new wavelength and each new advanced instrument provide ever more precise values ​​on gas, dust and stars. The data collected feeds the models used by researchers to study star formation. Thanks to the new Miri image, astronomers and astronomers now have higher resolution data in mid-infrared light than in the past and will be able to analyze dust measurements much more precisely to process a more complete three-dimensional landscape of this remote region. .

The Pillars of Creation are located within the vast Eagle Nebula, 6,500 light-years away from Earth.

He likes dogs, pizza and popcorn. Already a fanboy of Nintendo and Sony, but today throws anything. He has collaborated on sites and magazines such as GameBlast, Nintendo World, Hero and Portal Pop, but today is dedicated exclusively to Spark Chronicles.
Previous that’s why they keep stinging you! Summer is not over
Next Stock Market Recommendations: Today’s Buy from Campari to Unipol