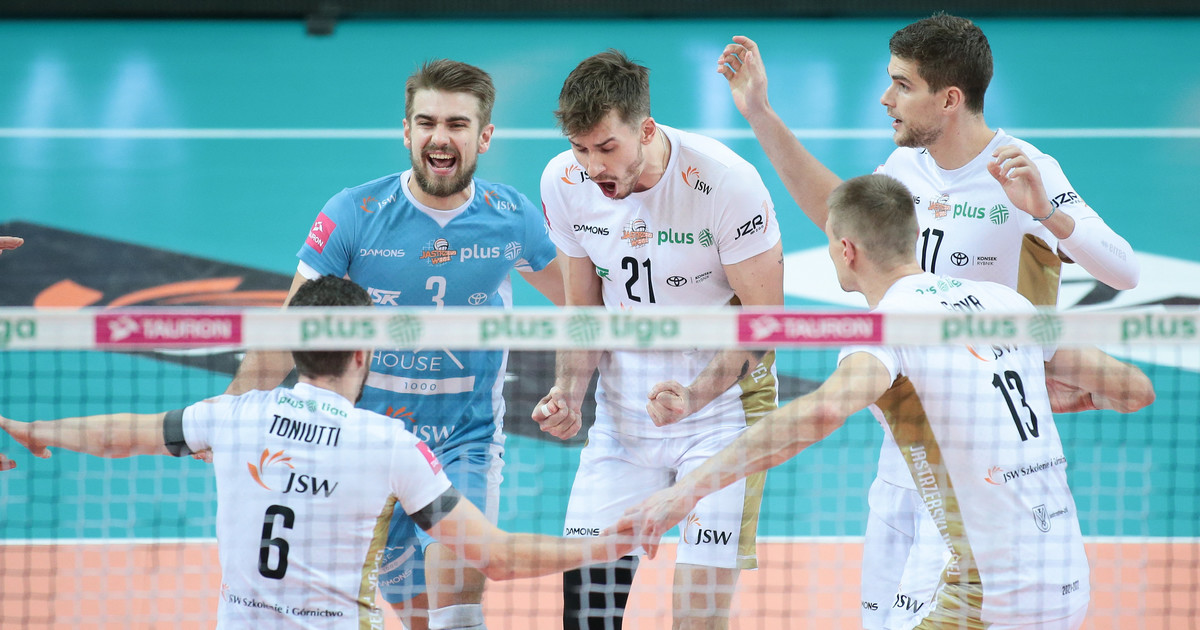 The Polish champions showed their power in the new year! They defeated their rivals in 76 minutes

– We can’t think about injuries and diseases. We have to deal with them. I hope that the new year will be a new deal and our problems will finally end – the coach of LUK Lublin, Dariusz Daszkiewicz, did not hide from the start of the rematch match with Jastrzębski Węgiel. His staff problems, however, did not end, because the team from Lublin came to the match in the 14th round without one of the leaders, Wojciech Włodarczyk (a cold), who was replaced by Mateusz Jóźwik in the starting line-up.

Staffing problems also affected the Hawkish people, who lacked Dawid Dryi, who was struggling with an injury to his back. However, Stephen Boyer was already in the team, who after Christmas did not show up for the training scheduled for December 29. It turned out that there was a slight misunderstanding and the Frenchman showed up for Monday’s class. However, the Olympic champion from Tokyo is excluded from the game because he suffered a metacarpal fracture and is now undergoing rehabilitation. For this reason, the club from Jastrzębie-Zdrój has recently contracted a Hungarian attacker Arpad Baroti who has experience in playing in PlusLiga.

At the beginning of the match, the players of Dariusz Daszkiewicz kept up with the Polish champions, who, however, first with Juri Gładyr, and then with Tomasz Fornal in the service field, built an advantage for themselves. The latter was the undisputed king of the block in the premiere version – he scored three of the seven points of the entire team and, interestingly, were his only points in this set. The Jastrzębie players were also unstoppable in accepting the service (as much as 80% accuracy), and Jan Hadrava, who never made a mistake in the attack, was unstoppable. On the other side of the net, the game was played by Jóźwik and Jakub Wachnik, but Bartosz Filipiak had a worse time (only 20% effective in the attack).

The beginning of the second part was confusingly similar to the one from the first part. This time, however, despite a three-point loss, the Lublin players took up the gauntlet, which led to the equalization. They forfeited the possibility of gaining the lead, because Filipiak ran into the Jastrzębie block. From that moment on, Hadrava took matters into his own hands, but this time the advantage of the Orange team was not as significant as in the inaugural installment. First of all, the newbie started to make a tighter block (from one in the first to six in the second game), and the level of the game was maintained by Jóźwik and Wachnik. During this set, Baroti made his debut in orange, who appeared on the pitch as part of a double substitution with second quarterback Eemim Tervaportti.

The course of the third set was very similar to the second, but the point-for-point fight lasted the longest this time. The breakthrough took place only at 20:19 for the Jastrzębians, because Łukasz Wiśniewski showed a tight block at that time, which allowed him to get two, and then three points advantage due to the error of the rivals. Andrea Gardini’s charges did not allow Lubliners to spread their wings anymore, and the point on the weight of the victory was scored by the second of the three Olympic champions from Tokyo, Trevor Clevenot, who were present in the orange team. For the third time this season, the MVP award went to Hadrava, who was the Orange’s best scorer.

Beniaminek did not manage to compensate the Polish champions for the defeat at the start of the PlusLiga season (they lost 1: 3 then). On the other hand, the Jastrzębie team won their eighth game in a row without losing a set. It was also their first of eight scheduled matches this month. In addition to fighting on Polish courts, they will also play in the Champions League.

David Martin is the lead editor for Spark Chronicles. David has been working as a freelance journalist.
Previous Kylian Mbappe has entered the new year with a bang. The star’s hat-trick, sure PSG’s promotion in the French Cup [WIDEO]
Next France Cup. Vannes OC – PSG 0-4