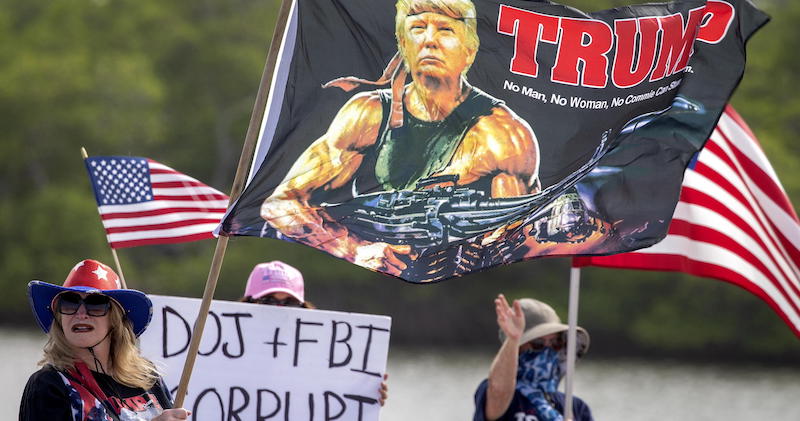 The Republicans are all against the FBI

In the last few hours, many members of the Republican Party of the United States have harshly criticized the search carried out by the FBI, the investigative agency of the US federal police, in the villa of former President Donald Trump in Florida. It was the first time in the history of the country that the police forces ransacked the private residence of a former president: also for this reason the Republicans are protesting very vigorously against what they believe was an attempt to weaken Trump and the party in view of the elections. medium term (expected in November) and a re-nomination of the former president in the presidential elections of 2024.

The reactions of the Republicans were very harsh and often quite peculiar, and were fueled by Trump himself, who denounced the search as a very serious interference. The virtually unanimous support the party has given him has also been interpreted as a sign that Trump’s influence on American conservative politics is still very strong.

The FBI has not disclosed the reasons for the search, although it seems most likely related to some confidential documents that Trump had brought to the mansion at the end of his presidential term. Immediately after the search, dozens of Trump and Republican Party supporters gathered in front of the mansion (called Mar-a-Lago) and began protesting with placards and slogans against the FBI, the Justice Department and the Democrats and President Joe Biden.

Some prominent Republicans very close to Trump have speculated future legal actions against Merrick Garland, US Attorney General, Head of the Justice Department, appointed by Joe Biden, who according to several sources personally authorized the search. Kevin McCarthy, leader of the Republican minority in the House, did so very explicitly, who wrote on Twitter that, if the Republicans regain control of the House after the mid-term elections, they will immediately conduct an investigation into the Department: “Keep all your documents and not make commitments, ”he wrote on Twitter to Garland.

Another well-known Republican, such as Florida Senator Marco Rubio, compared the FBI search to the maneuver of a “third world fascist dictatorship.”

Marjorie Taylor Greene, a Republican congresswoman well known for her extremist and conspiracy theories, who on Twitter spoke of a plot by the Democrats against Trump and called for a cut in funds to the FBI, used even more colorful tones.

Even more moderate Republicans, such as former Vice President Mike Pence, who could run for the Republican presidential primary for 2024 and who has long been considered very far from Trump, have condemned the search.

The Democrats have obviously rejected all accusations, reiterating that the presumption of innocence holds for Trump and that the Justice Department has every right to carry out its own investigations. House Speaker Nancy Pelosi also recalled how the current head of the FBI was appointed by Trump.

The reactions show that Trump is still central to the Republican Party and that most lawmakers are still on his side. It is also a sign of how both the possible investigation that will proceed from the search and the many others in which Trump is involved could be complicated and hampered by the very harsh public mobilizations of Trump and his people, which in fact according to many analysts constitute one of the main defense strategies of the former president.

– Read also: Trump did nothing to stop the attack on Congress

Videogames entered his life in the late '80s, at the time of the first meeting with Super Mario Bros, and even today they make it a permanent part, after almost 30 years. Pros and defects: he manages to finish Super Mario Bros in less than 5 minutes but he has never finished Final Fight with a credit ... he's still trying.
Previous Turin, Ilkhan’s first words: “I was already following the Bull. Here I find Radonjic “
Next No lie can remain hidden, plot, actors, ending, where it is filmed