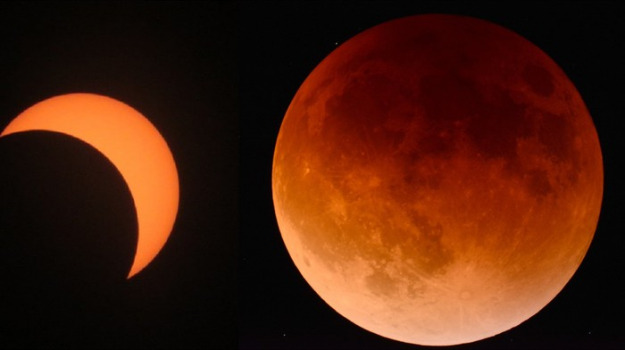 The Sun gives a spectacle: partial eclipse tomorrow, this is how it will be seen from Palermo

The Sun is preparing to put on a show: tomorrow morning, shortly after 11.00, a partial solar eclipse will begin which will also be clearly visible from Italy.
It is an event not to be missed, considering that the next opportunity to see the moon partially obscure the solar disk will have to wait four years. The important thing is to protect your eyes with a filter to avoid serious eye damage.

The eclipse will be clearly visible throughout Italy, albeit with some differences: in the North-East the phenomenon will begin earlier and will have a slightly greater extent than in the South-West. In particular, in Belluno it will be possible to admire the eclipse starting at 11.17, with 29% of the solar diameter covered, while at Palermo the show will start at 11.35, with a covered diameter of 22%.

The peak of the eclipse will be reached about an hour later, around 12.20.
“The important thing in these circumstances is safetybecause looking at the sun with the naked eye is extremely dangerous “, says Paolo Volpini of the Unione Astrofili Italiani (Uai):” You should only use binoculars and telescopes equipped with adequate filters – he adds – and, if in doubt, it is better to ask for advice from amateur associations, or participate only in organized events “.
Gianluca Masi, astrophysicist and scientific director of the Virtual Telescope Project, underlines the issue of safety: “The instruments must be certified for observing the Sun, it is not enough that they are simply attenuated,” says Masi.

“But there are also less” professional “alternatives, for example – he continues, if you expose a cardboard with a small hole or a colander to the Sun, the shadow cast will allow you to appreciate the progress of the eclipse without looking directly at the sky” .
Many events scheduled for tomorrow. The UAI has launched the Sun Day initiative, with the participation of astronomical observatories from all over Italy managed by the astrophile associations. On the Virtual Telescope Project website, however, it will be possible to follow the eclipse online starting at 11.00.
The National Institute of Astrophysics (INAF) also participates with a live broadcast on EduInaf’s Youtube and Facebook channels, to follow the beginning of the celestial phenomenon through the Inaf telescopes in Bologna, Cagliari, Palermo, Rome and Trieste.

The live broadcast will also show images of the eclipse from the places in the world where this phenomenon will be most pronounced, from Norway to Lithuania, from Turkey to the United Arab Emirates.
The partial eclipse is caused by the Moon which, being between the Sun and the Earth, will cast its shadow on the latter: the eclipse will however be partial, because our satellite will not be perfectly aligned between the Earth and the Sun. therefore, it will be possible to observe a total eclipse, but the phenomenon will assume a greater entity in Russia, where the solar diameter covered will reach 80%.
The last total eclipse visible from Italy dates back to 1961, as confirmed by Paolo Volpini, while the next one will have to wait until 2081.
In the meantime, from our country it will be possible to admire other partial eclipses: the next ones will be on 12 August 2026 and 2 August 2027.
“The latter, in particular, will be interesting, because it will concern a large portion of the solar disk – observes Masi – and also because it will be total within the borders of Italian territorial waters, even if we will see it partially from the ground”.

He likes dogs, pizza and popcorn. Already a fanboy of Nintendo and Sony, but today throws anything. He has collaborated on sites and magazines such as GameBlast, Nintendo World, Hero and Portal Pop, but today is dedicated exclusively to Spark Chronicles.
Previous Cara Delevingne wears the three issues of Dior Makeup
Next Schedules TV Formula 1 GP Mexico 2022 live Sky delayed TV8 – Formula 1