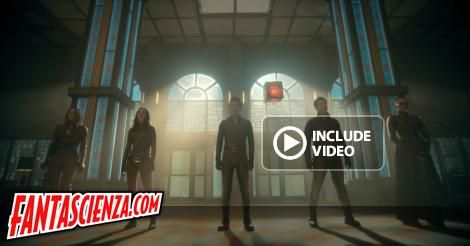 The Umbrella Academy, the trailer of the third season arrives

It has been a long time since 1963, the year in which the protagonists of The Umbrella Academy they found themselves scattered after the season one finale. To be precise, between 1960 and 1963, in Dallas, which gave Diego (David Castañeda) a crazy idea: to prevent the Kennedy murder.

As often seems to happen at Umbrella Academy, Season 2 opened with the full team in the midst of a war in the 1960s that ended in a nuclear apocalypse. Then we went back a little (as always) to find that after the last second escape from the apocalypse of the Season 1 finale, each of the Umbrella members had found themselves split at different points in the time between 1960 and 1963 and in some cases they had rebuilt a life, unfortunately also in this case, an apocalypse is approaching, this time not caused by Vanya (Elliot Page) A little at a time they managed to find each other, but the Handler (Kate Walsh) could too , head of the commission to prevent timeline violations. Eventually our parents managed to return in 2019, only to find that the Sparrow Academy lived in their home.

Sir Reginald Hargreeves (Colm Feore) is always at the head of the team, only in this reality it is precisely the Sparrow Academy, whose members are practically the opposite of our protagonists:

Jayme (Cazzie David) is a loner who hides under the hood. Silent, she is able to induce fear only with the malevolent growl she emits.

Sloane (Genesis Rodriguez) is perhaps the most positive of the bunch, she feels a cosmic call and wants to change her life, but Sparrow Academy keeps her stuck. Her powers are not clear.

Alphonso (Jake Epstein) wears the marks of battles and caustic humor on his face and body.

Fei (Britne Oldford) as you can find out in the trailer, is capable of summoning extremely aggressive crows.

Ben (Justin H. Min) is alive, but as they say in the trailer he is a head of… and he has his deadly tentacles.

Marcus (Justin Cornwell) is the team leader, rational, calculating and deadly when needed.

Finally Christopher is a telekinetic cube of unknown origin, he can freeze a room at polar levels or induce paralyzing panic. Furthermore, he is a sort of oracle capable of giving very useful advice.

But could the variants of Umbrella be enough? No, having created a temporal paradox, something called kugelblitz has arrived, which, for a change, will absorb all life on the planet in five days. So while they have to fight with their alternate versions, the Umbrella team must prevent the end of the world for the third time.

The ten episodes episodes of the third season of The Umbrella Academy they will also come to us all together on June 22 on Netflix, we leave you with the first official trailer in Italian and in the original language.

David Martin is the lead editor for Spark Chronicles. David has been working as a freelance journalist.
Previous G20: Meloni flies to Bali, in addition to Biden, he also sees Xi and Modi – Politics
Next Leclerc, Sainz and the sensational request rejected by Ferrari