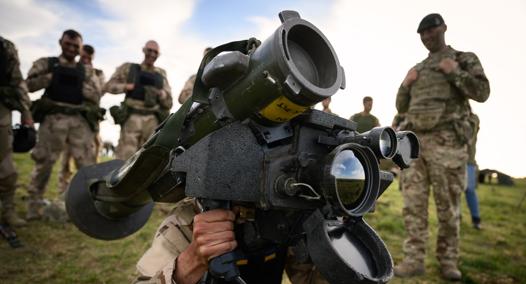 The United States finalizes the tracking program for weapons sent to Kiev- Corriere.it

According to Washington Post columnist David Ignatius, Putin is sending messages to the United States and the Biden administration should find a way to communicate

The Biden administration has come up with the tracking program of military supplies destined for Ukraineto make sure that the $ 17 billion in aid so far actually reaches the battlefield and doesn’t end up on the black market. The plan, developed during the summer, looks to 2024 and it became necessary after the doubts raised by some Western allies and members of the American Congress – also ridden by Russian propaganda, for which weapons for a billion dollars would be sold every month – had made fear that the weapons could be resold for contraband by criminal groups, or end up in the hands of the enemy. The details of the plan have not been made public, but they start from more training of the Ukrainian border police and a tighter and more effective tracking of shipments, as well as on the presence of more personnel in the Kiev embassy. the very chaotic nature of the combat, however, explains the same White House document, to make the plan difficult.

The threat had been confirmed in recent months by Europol, which coordinates the international fight against criminal organizations. At first, Ukrainian officials kept a register of weapons supplied to civilians, the European police agency explained in a note to governments, but this practice was abandoned and, as the war continued, they were distributed without keeping an archive. Till now, pallets with weapons land in Polandat the Rzeszow base, and are transferred to the Ukrainian border, where they are broken up into smaller packages to cross the border and reach your final destination in trucks, vans and even private cars which prevent the Russians from intercepting the cargoes.

From then on we have a void, a European source explained in July to Financial Times. We do not know the location of the weapons, we do not know where they go, where they are used or even if they remain in the country. The Americans say they are confident that the 8,500 anti-tank Javelins, 1,400 anti-aircraft Stingers, Himars or drones have reached the battlefield but, according to experts, it is impossible to confirm it. An unnamed official from the Biden administration, however, revealed to the New York Times that the United States is aware of only one case of arms smuggling outside Ukraine: A Swedish-made anti-tank grenade launcher that exploded in the trunk of a car 15 kilometers from Moscow in May, injuring a retired Russian soldier who had just returned from eastern Ukraine.

Meanwhile, David Ignatius, columnist for the Washington Post very skilled in interpreting the moods of the capital, he writes that the United States must find a way to communicate with Vladimir Putin. The battlefield does not allow for a diplomatic compromise: the army of Kiev advances and the Russian one in difficulty, the Ukrainians want to regain their territory and the Russians do not want to retreat. In this situation, the United States cannot force Kiev to negotiate, but they must patiently maintain a safe and constant flow of supplies. At the same time, Ignatius writes, they must find new channels for communicate that Washington is not seeking the destruction of Russia and wants to avoid direct military conflict.

While sending twisted and misleading messages, Putin has hinted that he wants to dialogue in some way: the Kremlin is taking advantage of every opportunity and Defense Minister Sergei Shoigu has twice called his American counterpart, Secretary Lloyd Austin, and the British, French and Turkish ministers. Sooner or later, the new centers of the multipolar world and the West will have to find a conversation about a future anyway, the Kremlin leader said in his Thursday speech at Moscow’s annual foreign policy forum. According to Ignatius, the White House should take it seriously and respond to the messageas it did when the Americans quickly responded to the Russians accusing the Ukrainians of preparing an attack with a dirty bomb.

This crisis communication model must be replicated in every area that could lead to a Third World Warargues the editorialist of Washington Post. To avoid the risk of a direct conflict, the United States is already doing a lot: keep their planes away from Russian airspace and ships out of Moscow waters; they did not send weapons that could allow the Ukrainians to strike enemy territory; they acknowledged that Zelensky’s men killed Daria Dugina at the gates of Moscow and warned Kiev against these attacks. Washington must continue to send messages to Moscow: more diplomacy is needed, writes Ignatius, but addressed in the right way.

Videogames entered his life in the late '80s, at the time of the first meeting with Super Mario Bros, and even today they make it a permanent part, after almost 30 years. Pros and defects: he manages to finish Super Mario Bros in less than 5 minutes but he has never finished Final Fight with a credit ... he's still trying.
Previous Sinner beaten 2-0 by Medvedev in Vienna, goodbye to the Finals
Next Mission: Impossible – Fallout, Henry Cavill reveals the origin of the famous “arms recharge” in a scene from the film | Cinema