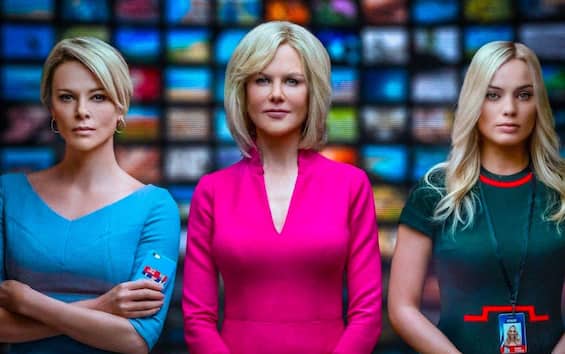 The film is inspired by the true story that led to the 2016 firing of Roger Ailes, then president and CEO of Fox accused of sexual harassment by several women

Bombshell – The voice of the scandal is a 2019 film directed by Jay Roach starring Charlize Theron, Nicole Kidman and Margot Robbie. The film won the Oscar in 2020 for Best Makeup and Hairstyling, delivered to Vivian Baker, Anne Morgan and Kazu Hiro. The one told in Bombshell is the true story of the scandal which, in 2016, shocked the American network Fox News.

In the movie Charlize Theron plays Megyn Kelly, journalist and famous presenter of Fox News, protagonist of the story that led to the dismissal of Roger Ailes. The man, then president and CEO of Fox, was accused of sexual harassment against many of his employees. The film starts with the story of the moment Megyn Kelly is chosen as moderator in the debate of Fox News with the then presidential candidate Donald Trump. During the interview, the journalist asks Trump to comment on some of his misogynistic and sexist statements. Following the debate, the future American president publishes a tweet of insults to Megyn Kelly, which unleash an inevitable storm. The journalist’s behavior towards Trump was not liked by Ailes, who at the time was also a consultant for the entrepreneur’s electoral campaign. Another protagonist of the film is Gretchen Carlson (Nicole Kidman), who was fired and relegated to one of Fox News’ minor programs for rejecting Ailes’ sexual advances. Carlson then decides to sue the tycoon sexual harassment television. She manages to track down other women who have been harassed by Ailes. Among these is Kayla Pospisil, one of the few fictional characters that encompasses all the women who came forward against the president of Fox. Megyn Kelly also sided against Ailes, who years earlier had also suffered harassment. The media storm finally led to the dismissal of Roger Ailes in 2016, with a healthy $40 million release.

Bombshellthe comments of the protagonists


Charlize Theron, the career of the protagonist of Bombshell

“Bombshell it is a political thriller – he explained Margot Robbie a Deadline – but it’s not so much about politics. Ultimately it’s about people coming together to take down a very powerful man who abuses that power. And this is a very thing satisfying to watch”said the actress, specifying that in her opinion it is a very important film especially for the male audience. “I think people forget that Time’s up and #MeToo weren’t born yet when it all happened,” Charlize Theron told Deadline. “This raises the stakes because when Gretchen Carlson went to a lawyer and came forward, there was no support yet”, specifying that the woman therefore did not have the support of a movement and had the courage to face everything alone. “It’s something no woman wants to be defined by, especially an ambitious woman who wants to be known for her work. All of the women involved had to deal with it. It was incredibly brave”.

From her latest successes (‘Big Little Lies’ and ‘The Undoing’, the miniseries that kept us glued to the screen), to her cinematic debut: the career of the Australian actress, born on June 20, 1967 in Honolulu is constantly on the rise. The gallery

Her career in the world of the seventh art began when she was very young in the early 80s.

In 2003, the actress received a star on the famous Hollywood Walk of Fame.

David Martin is the lead editor for Spark Chronicles. David has been working as a freelance journalist.
Previous Olivia Wilde – Don’t Worry Darling – Reviews
Next World Cup 2022, an algorithm has already predicted (almost) everything: the winner will be…