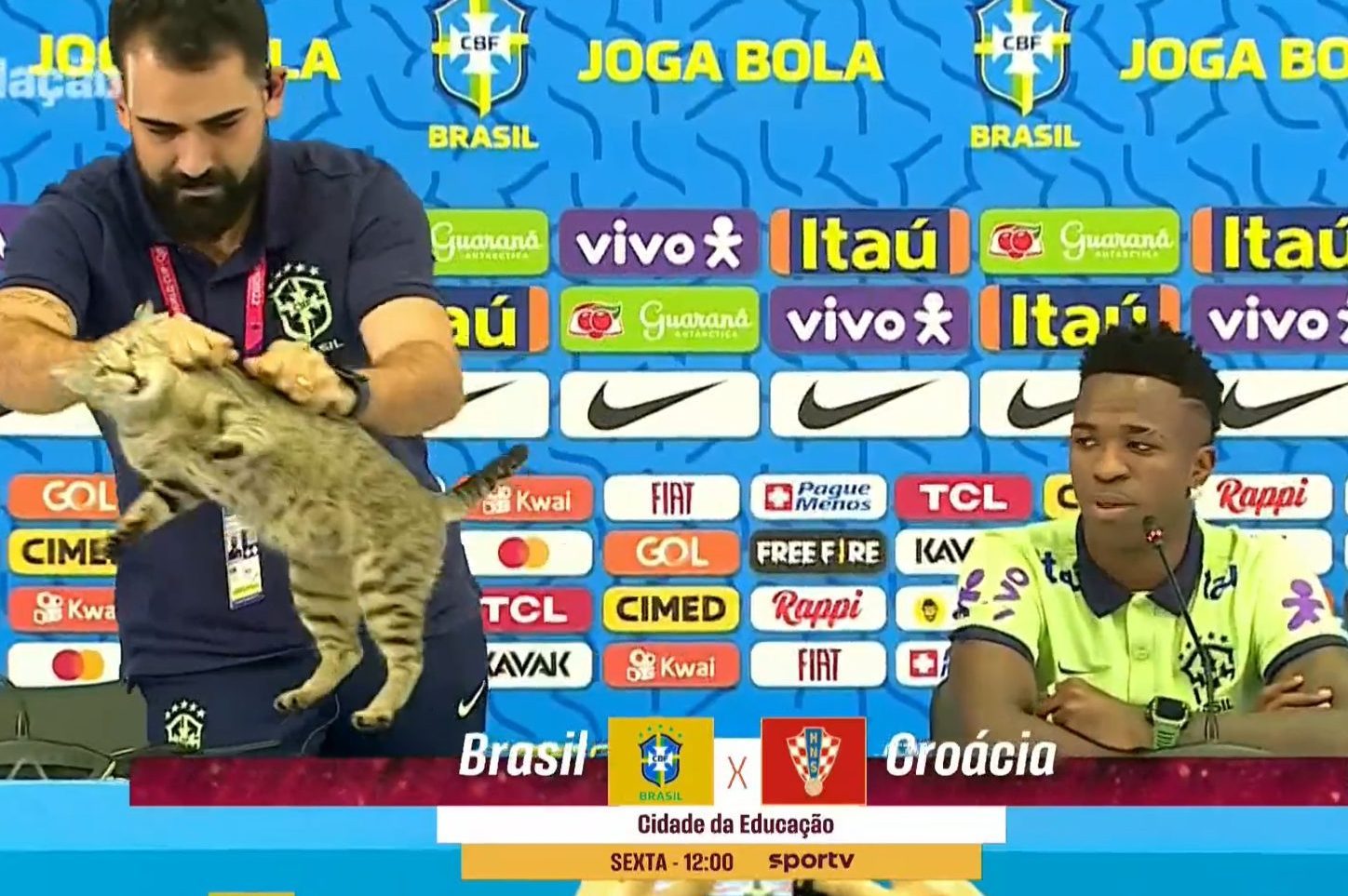 A cat bursts into the press conference of the Brazilian footballer Vinicius at the World Cup in Qatar: the feline is violently thrown to the ground by the Brazilian national team communications manager, a gesture that immediately triggers much controversy in the room and on social media.

A very curious episode took place during the Brazil press conference in Qatar on the eve of the 2022 World Cup quarter-final match against Croatia. Speaking for the South American national team is the talent of Real Madrid Vinicius Junior author of the first goal in poker trimmed to South Korea in the round of 16. The video of this press conference immediately went viral, sparking numerous controversies on social networks. However, it is not the words of the 22-year-old attacker that cause discussion what happened inches away from him while he was answering questions from reporters in the room.

Suddenly indeed on the table on which the microphones were placedright next to the footballer’s position, a cat appeared who crouched down not at all frightened by the noise around. The communication manager of the Brazil teamseated on the chair to the right of Vinicius, began to caress him but after a few seconds he stood up and, after grabbed with both hands, he threw him to the ground arousing a moan of disapproval from some of the people present and, at first, also from the Brazilian footballer himself who looked at him with an astonished expression.

The cat landed on the floor of the hall where the press conference was being held on its paws and then calmly continued to wander around the room, a sign that he didn’t hurt himself in the fall. However, given the reaction of many present the communication manager of Brazil tried to explain that that is the only way to lift a cat without hurting it and then miming the gesture of having accompanied it towards the floor, also triggering the laughter of Vinicius who, after this anomalous interlude was able to resume his press conference.

Cristiano Ronaldo rebels in the retreat of Portugal: those present are displaced

The explanation of the communication manager of the Brazilian national football team however, it did not convince many social users that commenting on the video immediately went viral they expressed their indignation for human behavior. Under accusation he ended above all the violent way he threw the cat to the floor instead of accompanying him delicately (as he later mimicked in an attempt to justify himself). In fact, many posts and comments have highlighted how Vinicius Rodrigues, this is the man’s name, despite having grasped it correctly, was too abrupt in throwing the cat on the floor.

The controversy regarding this episode has literally flared up, especially in Brazil, with the national team’s communications manager finished in the crosshairs of animal rights activists and many other people. To appease spirits a little, the intervention of the Regional Council of Veterinary Medicine of the State of São Paulo which in a statement stated that in the conduct of Vinicius Rodrigues he did not find any element that could be defined as ill-treatment.

David Martin is the lead editor for Spark Chronicles. David has been working as a freelance journalist.
Previous Wes Anderson, his new film will arrive in US theaters in June | Awards Today
Next The Eight Mountains and The Immensity at the Sundance Film Festival – Cinema