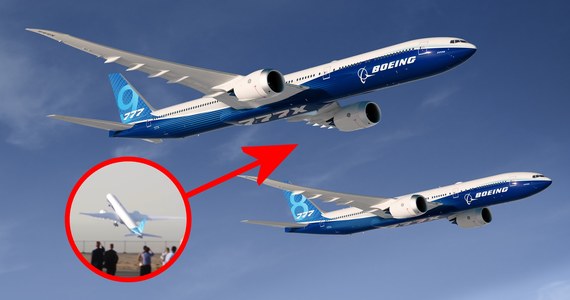 For the American company, it is a flagship project that is to allow it to get out of huge financial problems after the recent high-profile machine disasters 737 Max. A video from the fair has just appeared on the web Dubai Airshowwhere we can see this giant in action in the sky.

Boeing 777X takes off the runway almost vertically. This shows how powerful the engines are. The plane is measuring almost 77 meters long and has a wingspan of 72 meters.

The American aviation company has announced that the new unrecognizable machine will change the world of air travel all over our beautiful planet. The plane was equipped with two powerful engines GE9X from General Electric. It is a masterpiece of the modern passenger aviation industry.

This king of the skies is to come into use as early as 2024. It will be able to take up to 420 people on board. The machine is to have a range of over 16,000 kilometers. It is estimated that it will bring global airlines savings of 10 percent, this means that there will be billions of dollars at stake.

All this will be thanks to the GE9X engines. They will provide ultra long range with huge savings on fuel. Most importantly, it is not only the greenest engine of its type in the world, but also the quietest. In the GE9X engine, the fan diameter is as much as 330 centimeters, and with the housing as much as 426 centimeters.

It is worth adding here that the engine fan of the popular Boeing 737, which is used by low-cost airlines Ryanair, has a diameter of 155 centimeters, which is more than twice as small as the GE9X. The thrust generated in the newest Boeing 777-X engine is up to 110,000 pounds, which translates to 445 kN.

Interestingly, Polish engineers from the Engineering Design Center (EDC) in Warsaw had a large share in the design of this engine. Poles will also service these engines in the one built by General Electric Aviation and Lufthansa Technik, an engine service center in Środa Śląska. It is the most modern facility of this type in the world. On a daily basis, it employs 600 people, including highly qualified engineers.

The variety offered by video games never ceases to amaze him. He loves OutRun's drifting as well as the contemplative walks of Dear Esther. Immersing himself in other worlds is an incomparable feeling for him: he understood it by playing for the first time in Shenmue.
Previous Intel ARC – the most powerful version of the Alchemist graphics card is back on GeekBench. It’s better than before
Next Joanna Wołosz broke the world record! – Volleyball. Foreign leagues