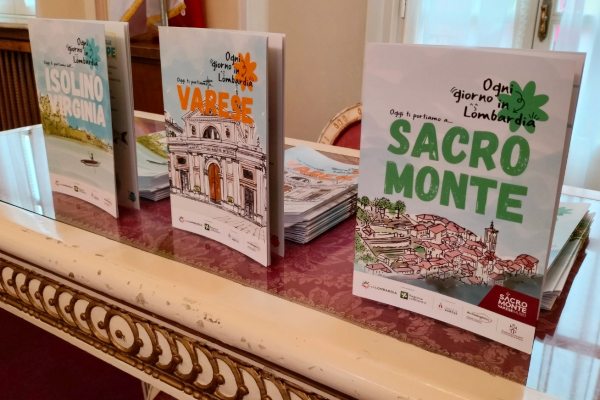 VARESE – Three notebooks with three exceptional guides for a special visit to the most beautiful places in Varese: for children and families. They bear the signature of Archaeologistsa social enterprise engaged in the enhancement of cultural heritage. “Family trip to Varese” is the title of the project, realized with the contribution of Lombardy region within the program “Every day in Lombardy”. The guides are flanked by three launch events in December.

The project, illustrated this morning Tuesday 29 November at Palazzo Estense, ha the patronage of the Municipality of Varese and the support of the Paolo VI Foundation for the Sacro Monte di Varese. «Thank you for your commitment – ​​commented the deputy mayor Ivana Perusin – is an important project to explain in simple terms to children and families the most beautiful parts of our territory and is part of the tourism promotion process that the Municipality has been carrying out for some time, with a significant increase in attendance ». The councilor for culture Enzo Laforgia he stressed that “proposals of this type have an extraordinary civic education value”.

To present the details Marina Albeni of Archaeologists. «The project was born from the desire to make known the historical-artistic heritage of Varese and to make it touristically accessible to families, especially to children. Varese and its territory have a lot to say and to tell». Three illustrated guides dedicated to children have been created to personalize, featuring three illustrious characters from the history of Varese: Andrew Bridgesentrepreneur from Gallarate (Villa Andrea of ​​the Ville Ponti congress center bears his name) who became the owner of Lake Varese at the end of the 19th century; Giovan Battista Aguggiarithe friar who in the seventeenth century designed the avenue of the chapels of the Sacro Monte, e Joseph Toeplitz, banker and client between the late nineteenth and early twentieth century of the villa of the same name in Varese. Through their stories and their testimonies it is possible to visit three symbolic places of the Garden City: the Sacro Monte, the small island of Virginia and the city centre.

The three illustrated notebooks therefore aim to guide families and children on a visit to discover three of the most important places in the city. Guides are customizable: there is the possibility to take notes, draw or indicate what you liked best». Thanks to the illustrations by Morgana Bartolomei and the texts written by Archeologists, the notebooks printed by Varese typography in fact, they allow a view independently, with the possibility of knowing very particular elements and stories. I’m in free distribution in the three dedicated places, at the infopoint in Piazza Monte Grappa and in some hotels in the city. Gianandrea Redaelli of the Tipografica of Varese underlined how we wanted to give a graphic cut suitable for an audience of children, to stimulate their curiosity.

To make the Varese public aware of the three new guides have been organized launch three free guided tours: they will be held on December 4th at Isolino Virginia, on December 8th at the Sacro Monte and on December 10th around the city. «With the first date of Sunday 4th December we will follow Andrea Ponti’s notebook – explains Marina Albeni – he was the ancient owner of the lake and, therefore, of the small island that rises inside it, the islet Virginia, once called “Camilla”, later baptized with the name of the Ponti’s wife. The visit will go to the discovery of the Neolithic remains present on the island. In the second stage of Thursday 8 December you will visit the Sacro Monte following the notebook of friar Aguggiari, the creator at the beginning of the 17th century of the sacred way of the chapels which leads to the sanctuary. Last visit in the center of Varese Saturday 10th December. The chosen guide is the banker Joseph Toeplitz, owner and client of the Villa Toeplitz located in Sant’Ambrogio. The tour will touch the squares, the historic places, the cloisters, the basilica of San Vittore and the baptistery of San Giovanni Battista, to close with Villa Mirabello and Palazzo Estense with its park. Visits begin at 11. At this address information.

David Martin is the lead editor for Spark Chronicles. David has been working as a freelance journalist.
Previous Crime at Mont Saint Michel film, actors, cast, ending, where it is filmed
Next Project Zomboid PC Game Download Full Version