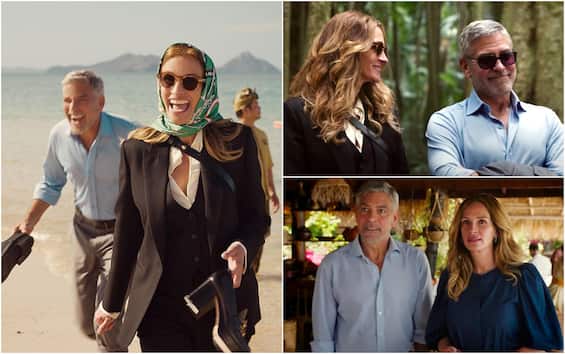 “Ticket to Paradise”, comes the film with George Clooney and Julia Roberts: plot, cast and curiosity

The two Oscar-winning actors are the protagonists of this romantic and brilliant comedy, directed by Ol Parker and in Italian cinemas starting today 6 October. They play a divorced couple, now on bad terms, who reunite on a mission: to convince their daughter not to marry a boy they met recently in Bali. Here’s what you need to know about the film

Julia Roberts and George Clooney together again at the cinema: in Italian cinemas it comes out today, Thursday 6 October, Ticket to Paradise. The two Oscar-winning actors are the protagonists of this romantic and brilliant comedy, which tells two love stories in parallel and shows how second chances can hide surprises. A light and fun film, perfect for those who want to be distracted and not think too much. From the plot to the cast, here’s what you need to know about the film and some curiosities.

Ticket to Paradise, exclusive clip of the rom-comedy

Julia Roberts and George Clooney play Georgia and David. She is an important gallery owner struggling with an unlikely love affair with a younger and less smart driver, he is a successful architect and experienced tombeur de femmes. What do they have in common? They were married and have a daughter, Lily Cotton. Georgia and David are now separated, they bear little and have bad relationships, but they find themselves united to achieve a common goal: to prevent their beloved Lily from making what they consider a mistake. The girl, after graduating in law, flew to Bali for a vacation and she recently met Gede, a rich algae farmer, handsome and friendly, with whom she fell in love. Georgia and David don’t want their daughter to throw her life away for a summer love affair and leave for Indonesia to persuade her not to marry. But the couple’s old grudges quickly come back to the surface. Will the two ex, between a fight and another, be able to complete their mission?

The director and the cast

Ticket to Paradise is directed by Ol Parker, director of Mamma Mia! Here we go again and screenwriter of Marigold Hotel. Produced by Working Title, Smokehouse Pictures and Red Om Films, it is distributed by Universal. In addition to Julia Roberts and George Clooney, the cast includes Kaitlyn Dever as Lily and Maxime Bouttier as Gede. There’s also Billie Lourd, who plays the college friend who takes Lily to Bali. Lucas Bravo, star of Emily in Paris.


Money Monster, the full cast of the film with George Clooney. PHOTO

The 90-minute film marks the return of the Roberts-Clooney duo to the big screen. The two stars – an Oscar for her as Best Actress in a Leading Role Erin Brockovich – Strong as the truthone for him as Best Supporting Actor for Syriana – have already acted together several times: in Confessions of a Dangerous Mindin Ocean’s Elevenin Ocean’s Twelvein the thriller Money Monster – The other side of money. Between them, they said, there is a great friendship and the understanding is also evident in this film. The two actors are the added value of the film. “Our roles were clearly written for us by Ol Parker, who originally gave the characters the very names of Georgia and Julian,” George Clooney revealed in an interview. And he confessed: “I haven’t been doing a romantic comedy since One day by chancebut I thought, ‘If Jules is ready, I think it might be fun …’ “Al New York TimesFurthermore, the two stars told how their friendship made it difficult to shoot the kissing scene. “It took 80 takes to shoot it,” said Clooney. And Roberts said: “It actually took 79 shots of us laughing and then one of us kissing.”

Not just two great actors, to characterize Ticket to Paradise there are also gorgeous locations. The film was shot in Queensland, Australia, thanks to incentives from the Australian federal government and Screen Queensland’s Production Attraction Strategy. The principal shots were taken on Hamilton Island, a paradise near the Great Barrier Reef. Work on the set took place between November 2021 and February 2022 and was stopped in January due to the increase in Covid-19 cases.

“The Clooneys saved me from loneliness”


George and Amal Clooney: the most beautiful photos of the couple

While filming in Australia, Julia Roberts was long away from her husband Danny Moder and three children Hazel, Phinnaeus Walter and Henry Daniel. George Clooney was there with his family instead. Roberts recounted how her friendship with her colleague and the company of Clooney’s – her neighbors on Hamilton Island – helped her get through that period, made even more difficult by anti-Covid measures and the ‘isolation. “The Clooneys saved me from complete loneliness and despair. We were like in a glass dome and it was the longest time I have lived away from my family. I don’t think I’ve spent that much time alone since I was 25, ”Roberts said in an interview. Clooney also spoke fondly of those days: “I would leave the house early in the morning and do ‘Caa-caa’ (the cry of a bird), Julia would go out and reply ‘Caa-caa’. Then we would bring her a cup of coffee. She had become Aunt Juju for my children ”.

Ticket to Paradise, the cast of the film from Julia Roberts to George Clooney

George Clooney and Julia Roberts are back together in Ticket to Paradise, a romantic comedy where they play two ex-spouses committed to sabotaging their beloved daughter’s wedding.

George Clooney and Julia Roberts are linked by a great friendship. Their feeling was also often seen on the set, where they starred together in several films, from Confessions of a dangerous mind to Ocean’s Eleven.

Ticket to Paradise it’s their fifth collaboration. They confessed to rehearsing the kissing scene for this movie countless times

David Martin is the lead editor for Spark Chronicles. David has been working as a freelance journalist.
Previous Pixel 7 Pro: benchmarks of the next Google smartphone are appearing
Next Bills, so the cost of household appliances changes with the new price increases