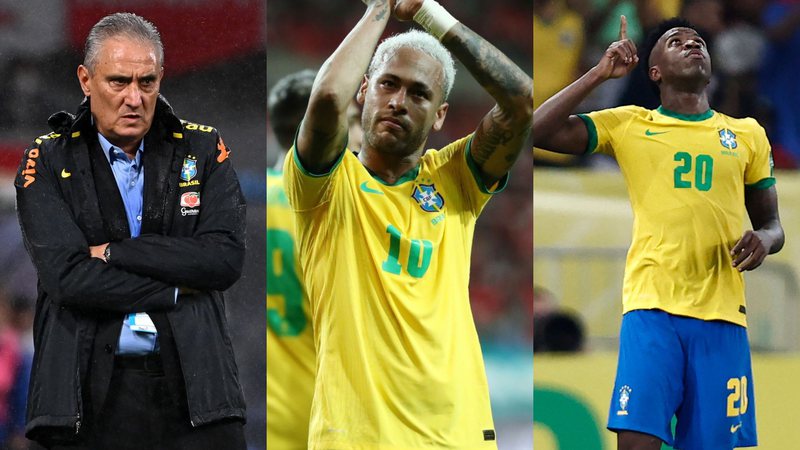 Tite vents about Neymar and reveals tip to Vinícius Jr

TIte, Neymar and Vinícius Jr are some of the Brazilian team’s hopes for the World Cup dispute and the coach controversial statements on the subject; check out!

Titus, Neymarand vinicius jrare the hopes of Brazilian Team to the world Cup from Qatar. The trio is getting closer and closer to the World Cup and the expectation around the sixth championship grows every time Brazil enters the field. The coach of the Canarinha team, in an interview with the podcast “Sexta Estrela”, revealed his plans for the two forwards.

According to Tite, Neymar is not a problem, but a solution. He went against the criticism suffered by the striker recently. It is worth noting that the shirt number 10 of the Brazilian team did not have a great season for PSG and the possibility of the athlete leaving France makes everyone worried about his future. However, the Brazil coach is not bothered and tries to just put him to be as participatory as possible on the field.

He is not a problem, he is a solution. Sometimes they say that there he will make more mistakes. His position makes him make more mistakes, because once he does it creatively, he’s going to be decisive.”indicated the coach of the Brazilian national team.

Tite made it very clear where he intends to use Neymar in Brazil. The coach does not want to keep him on the left wing and hinted that he will use his number 10 shirt in a more central region, where he demands more mobility and creativity from his player. According to the coach of the Brazilian National Team, whoever uses the player only on the left is “stupid”.

“If a coach selects Neymar from the side of the team, me watching the game will call him a donkey. A player with these qualities, putting on the bandwagon, greatly restricts creative capacity. Creativity is not constancy, it is eventuality, it is circumstantial. He will make more mistakes, yes, because his creative capacity and the place he is in demand it.“, followed.

Tite sees a little bit of Neymar in Vinícius Jr and revealed that he had a conversation about this topic with the striker of the Brazilian team!

We were in training, I said to Vini: “You are Neymar from 2014, because Neymar from Barcelona and the national team at that time was Neymar from the side, today he is from the center“, finished

Today was the day to receive the @vinijr at the CBF headquarters and at the @museuselecao. What an honor! Inspiration for the upcoming World Cup, huh? 🏆😍🇧🇷

Videogames entered his life in the late '80s, at the time of the first meeting with Super Mario Bros, and even today they make it a permanent part, after almost 30 years. Pros and defects: he manages to finish Super Mario Bros in less than 5 minutes but he has never finished Final Fight with a credit ... he's still trying.
Previous Elisabetta Cocciaretto advances, out of Martina Trevisan and Lucia Bronzetti – OA Sport
Next Rock in Rio 2022: check times for all the shows on the Mundo and Sunset stages