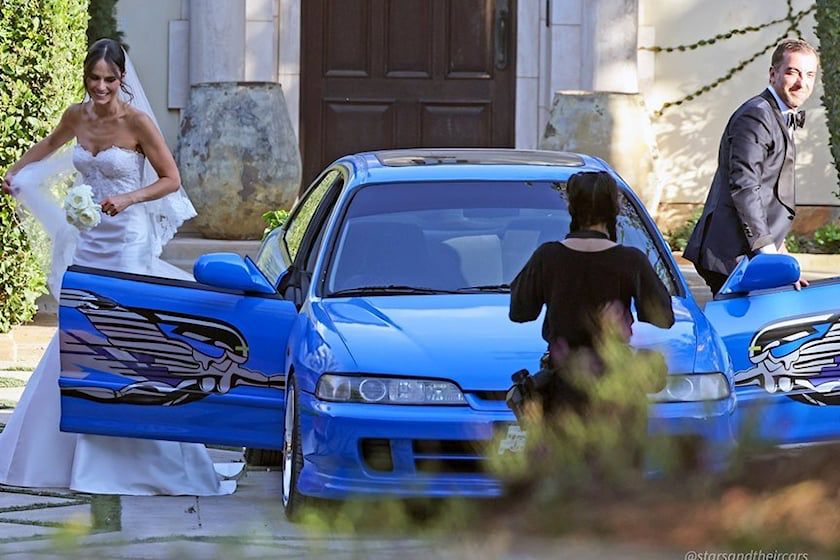 If we asked you to name one of the longest running, most famous and successful film sagas, probably some of you would name Fast And Furious. The first chapter of the saga has become a real milestone especially for those who love cars, and it is now linked to the daily life of the actors who have been part of it.

And indeed a few days ago Jordana Brewster, the actress who played Mia Torettogot married to Mason Morfit, and to go to church she didn’t choose a car from the past or some other sedan of the moment, but she showed up aboard the 1994 Honda Integra in blue tint used in the film by Mia, in the scene in which Dom Toretto’s sister showed Brian O’Conner (played by the unforgettable Paul Walker, who passed away due to a car accident) her driving skills.

But the show didn’t end: next to the Integra, in front of the church, there were two other beauties of the Rising Sun (several Fast And Furious cars will end up in charity auction), namely the 2003 Honda NSX in black tint, used by Mia in Fast & Furious of 2009, e Dom’s legendary 1993 Mazda RX-7played by Vin Diesel.

The car that accompanied the actress is therefore identical to the one used in the film, but it is a faithful replica, given that the original car was destroyed in a car accident shortly after the release of the film. Finally, remember that Mia will return in the next Fast X, the tenth chapter of the franchise that will also welcome Jason Momoa.

David Martin is the lead editor for Spark Chronicles. David has been working as a freelance journalist.
Previous The Almost Gone PC Free Download Full Version
Next South Korea-Portugal, lineups and where to see the 2022 World Cup match