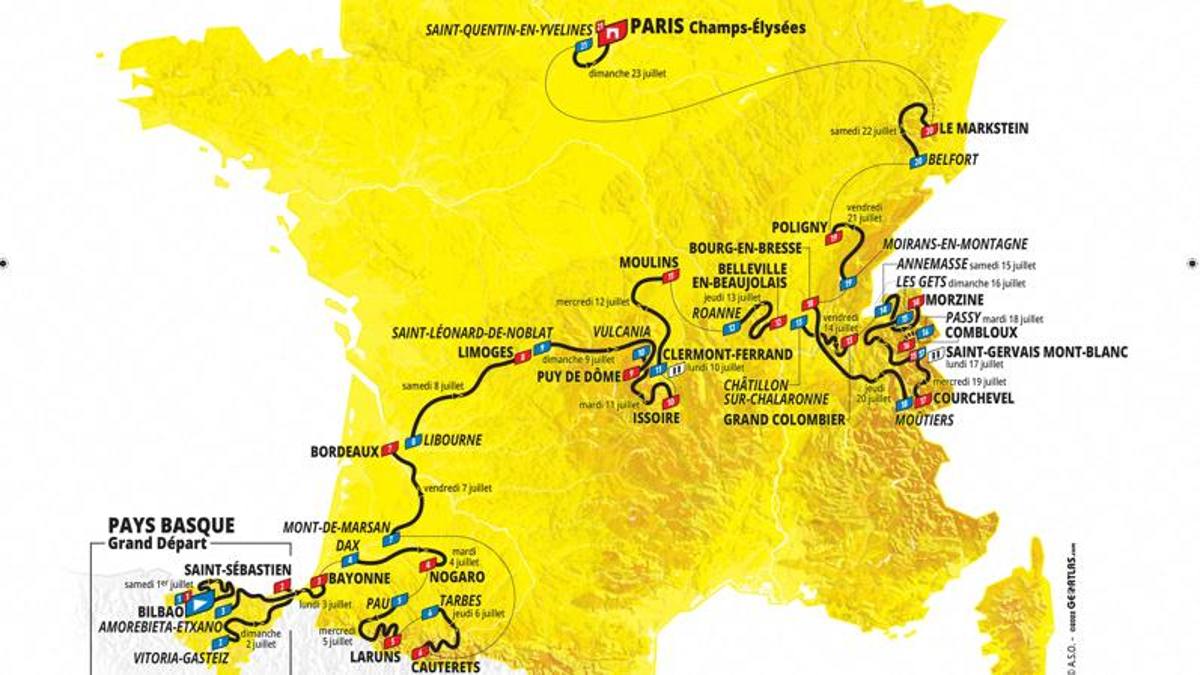 Tour de France 2023: there is the great return to the Puy de Dome. The start from Bilbao

The stage with arrival on the highest extinct volcano in Auvergne, scene of the mythical duel between Anquetil and Poulidor, had been missing since 1988

It will be the Tour of the mountains. Not only the Alps, but also the Pyrenees and above all the Massifs, the mountainous areas in the heart of France, complete with a great return to the legendary Puy de Dome, the highest volcano in Auvergne, absent since 1988, with a stretch even without public, for reasons of security and heritage conservation. A single time trial stage, but all uphill, and then a great start from Bilbato, in the Basque Country that welcome the first three stages. In total 3404 kilometers, with 8 mountain stages out of the 21 total, until the arrival on the Champs Elysées, on 23 July.

So many climbs, so many battles, in a word, therefore, so much mountain for a path that cuts diagonally across France, from west to east, from the Pyrenees to the Alps, to Courchevel and to the Col de la Loze, at 2304 meters. But it is the mountainous areas of the center of the country that hold the spot: docile and wooded at first sight, but with lacerating peaks, as on the Tourmalet (2115m, at 7.3%). You go on important gradients and narrow streets, sometimes even closed to fans’ vehicles. And to the fans themselves, precisely, as on the last 4 kilometers, with an average gradient of 11.6%, which lead to the Puy De Dome, a site registered in the Unesco heritage but above all a legendary place for French cycling. At the presentation at the Porte Maillot in Paris, the memory of Raymond Poulidor, the eternal second, could not miss, who in 1964 came close to triumph in a fierce duel with Jacques Anquetil, who instead won the fifth Tour. black and white as for Fausto Coppi’s victory in 1952.

“The idea – explains the director of the Tour Christian Prudhomme – is to ensure that the suspense always remains intact”. There is a willingness on the part of the organizers to break every strategy, dismantle predictions and push the runners to make fewer calculations, to surprise spectators and viewers. And maybe keep everything open until the grand finale, on the Elisi, after more than three weeks of racing, won last year by the Danish Jonas Vingegaard. And there are many stages that intersect with those of the Women’s Tour, in its second edition. And which remains, even in the presentation, always in the shadow of the men’s Grande Boucle, despite the good audience results collected last year with an average of 2 million viewers in France, and a peak of 6 for the last stage. But above all with many girls along the streets, as remembered by the director Marion Rousse.

David Martin is the lead editor for Spark Chronicles. David has been working as a freelance journalist.
Previous Rear windows do not drop completely: the reason is absurd | Here I am why
Next Xi Jinping: willing to work with the US for peaceful coexistence