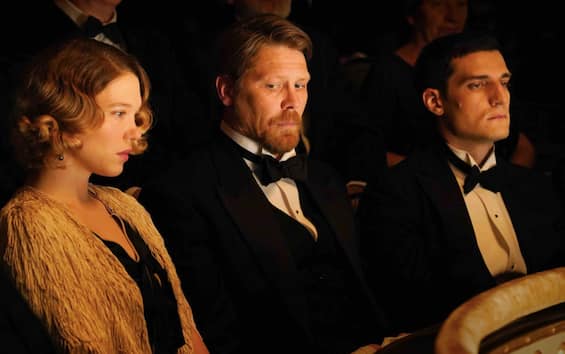 The video has been released that anticipates what we will see in the highly anticipated film starring the French diva and star. The film, based on the novel of the same name by Milán Füst, will arrive in our cinemas on April 14 via Altre Storie. Sergio Rubini and Jasmine Trinca are also in the cast

The trailer for is out My wife’s storythe highly anticipated film starring Léa Seydoux and Louis Garrel which will arrive in our theaters on April 14, thanks to Altre Storie.

A highly anticipated film for various reasons, starting with the presence of two of the most loved stars in today’s French acting scene. The legendary Léa Seydoux and Louis Garrel will also be joined on the set by two very important names in the Italian acting scene, namely Sergio Rubini and Jasmine Trinca.

My wife’s story is based on the novel of the same name by Milán Füst. The film adaptation is directed by the Hungarian director Ildikó Enyedi, who also wrote the screenplay, working personally on the film adaptation of the book.

You can watch the official trailer of the film My wife’s story in the video that you find above, at the head of this article.

My wife’s story it is a film that was born from the joint production of several countries, namely Hungary, Germany, France and Italy. The original title is Hungarian: A feleségem története.
The film officially released in 2021, directed by Hungarian director Ildikó Enyedi, here in her English-language feature film debut.

The author of the book of the same name from which it is based, Milán Füst, is also an important name in Hungarian culture, i.e. one of Hungary’s most famous writers, playwrights and poets, born in 1888 in Budapest and died here in 1967.

My wife’s story was presented in competition at the 74th Cannes Film Festival.

The best movies of Louis Garrel

Set in the 1920s, the film tells the story of Dutch sea captain Jakob Störr (played by Gijs Naber) who is in a café and who makes a bet with a friend: he will marry the first woman who enters the café.

Enter the door at that moment Lizzy, a French girl as charming as she is enigmatic. She is the character played by Léa Seydoux, winner of the Palme d’Or at Cannes for Adele ‘s life and also famous for her role as Madeleine Swann in the movies Specter And No Time to Die. Undoubtedly, it is one of the most interesting names among French actresses today.

Lizzy will indeed become his future wife and therefore a bet made for fun, as a joke, will ultimately change Captain Störr’s life forever. He will move with the woman to an elegant apartment in Paris, starting a new life. However, he knows little or nothing about his bride, whose life and history appear very mysterious. Married life will begin to become difficult for him due to the obsession that grips him: he wants to find out more about his wife.

Cannes, Laetitia Casta and Louis Garrel, the glam couple of the Croisette

The couple Laetitia Casta and Louis Garrel walked the red carpet at the 74th edition of the Cannes Film Festival. The two, disinclined to public outings and always very reserved, have captured the attention of photographers. The photos

Laetitia Casta and her husband Louis Garrel in love on the red carpet: for many it is the most glamorous couple in Cannes

Laetitia Casta, who recently became a mother for the fourth time, has enchanted the Croisette

David Martin is the lead editor for Spark Chronicles. David has been working as a freelance journalist.
Previous I had shots of tequila before the nude scene in The Wolf of Wall Street
Next LEGO City Undercover PC Game Download Full Version