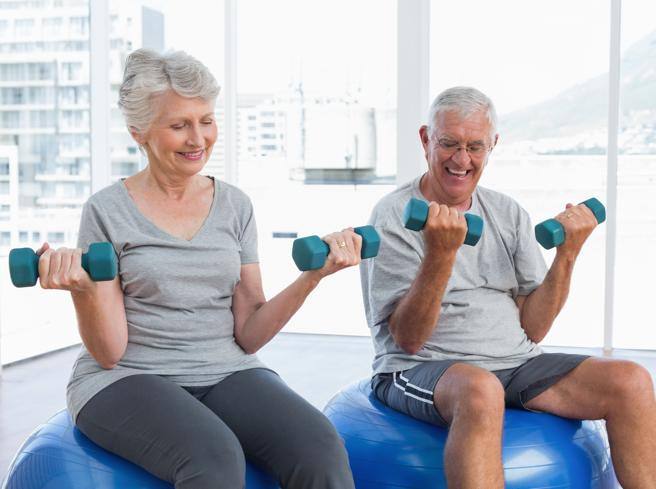 According to the researchers, seniors could benefit from muscle-strengthening activities. But those who also engage in aerobic activity get even better benefits

Regular exercise with weights is also linked to a lower risk of premature death from any cause, except for cancer. This is found in one of the largest studies of its kind published in the British Journal Sports Medicine. Furthermore if the weekly workout includes both weights and aerobic activities it seems to have even greater benefits. However, it should be remembered that many jobs now associate aerobic activity (such as running, brisk walking or swimming) with a longer life, warding off diseases, including cancers. This is why the training mix seems to be the best recipe for a long and healthy life.

The guidelines instruct adults to do at least 150 minutes of moderate-intensity activity per week or 75 minutes of high-intensity activity. Added to this is the invitation to perform strengthening exercises for the back, abdomen, chest, shoulders and arms at least a couple of times a week. Although aerobic exercise is consistently associated with a lower risk of premature death, until now it was unclear whether weight training could have similar effects.. So, in an effort to fill this knowledge gap, the researchers set out to assess the potential impact of weight training and aerobic activities on the risk of premature death among the elderly.

Researchers from the US National Cancer Institute in Rockville, Maryland then looked at data on nearly 100,000 adults who took part in a US screening study. Volunteers with a ‘average age of 71 years, provided information on their weightlifting activity and other types of exercises they performed. Nearly 1 in 4 respondents (23%) reported weight lifting activity; 16% said they trained regularly with weights one to six times a week. Almost a third (32%) were sufficiently active on aerobic activity by meeting (24%) or exceeding (8%) the guidelines. During the nine-year follow-up period, 28,477 deaths occurred.

The study found that adults who reported doing Generally weightlifting had a 9% lower “risk of mortality from all causes”. L‘regular activity led to a 14% lower risk of death. No link has been found between weight training and cancer deaths. Those who did aerobic exercise had a 32% lower risk of premature death. Finally it was found that gAdults who reported following guidelines on aerobic and weightlifting activity at least once or twice a week had a 41% to 47% lower risk of premature death. Our finding that mortality risk appeared to be lower for those who participated in both types of exercise provides strong support for current recommendations to engage in both aerobic and muscle-strengthening activities, the authors write. Older people would likely benefit from adding weight lifting exercises to their physical activity routines, they concluded.

This is an observational study and, as such, cannot establish the cause of a lower risk of premature death, as well as the fact that it was based on personal memory and included data collected in a single moment. No specific details were available on training intensity, training load, volume (sets and reps) and how long participants had trained with weights, which, the authors themselves admit, may have influenced the results. . However, the size of the sample made it possible to conclude that lifting weights, in addition to aerobic activity, prolongs life.

Videogames entered his life in the late '80s, at the time of the first meeting with Super Mario Bros, and even today they make it a permanent part, after almost 30 years. Pros and defects: he manages to finish Super Mario Bros in less than 5 minutes but he has never finished Final Fight with a credit ... he's still trying.
Previous Emilia Clarke on Game of Thrones finale “Daenerys did nothing wrong”
Next PlayStation Plus, the new free games for October are officially unveiled