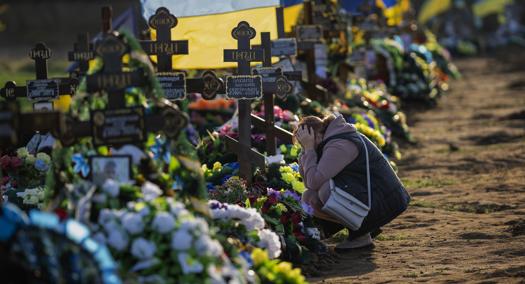 The news of Thursday 27 October, live

• The war in Ukraine has reached the 245th day.

• Russian President Vladimir Putin declared that the risk of world conflict is high.
• NATO replies: Russia does not use false pretexts for escalation.
• Russia has carried out exercises to counter a possible enemy nuclear attack.

09:57 – Kiev, the Russians continue to fortify defensive lines in Kherson

In the Kherson region, the Ukrainian general staff recorded in the morning bulletin that active hostilities continue with the enemy who fired once again at the settlements in the Berislav region, injuring civilians and damaging homes, shops, pharmacies, factories. According to the General Staff of the Ukrainian Armed Forces, the Russians continue to equip the defensive lines on the left bank of the Dnieper River, conducting defensive operations and trying to keep the lines occupied. The enemy – explain the Ukrainians – has tried twice to break through our defenses. He was unsuccessful and retired with losses.

Three civilians died and two others were wounded in the course of yesterday’s Russian attacks in the Donetsk region of eastern Ukraine: the head of the regional military administration announced on Telegram, Pavlo Kyrylenko, as Ukrinform reports. Three civilians from the Donetsk region were killed by the Russians in Bakhmut. Two other people were injured yesterday, Kyrylenko wrote, adding that at the moment it is not possible to establish the number of victims in Mariupol and Volnovakha.

The Russian Federation considers the threat of the use of a dirty bomb by Kiev high: it has the capacity to produce it, says the permanent mission of Moscow to the UN.

The electricity distribution company forced to rationing energy by interrupting the service in the Kiev region at times. As reported in the Ukrainian press, the breaks, defined as stabilization, were arranged by NEK Ukrenergo and started this morning at 5.38 local time. Consumers have been divided into three groups and to find out the times of the black out that concerns them they must consult the DTEK website. Each group will be disconnected during a certain period of time: to understand what time of day you may have a power outage – specify your address and you will receive a schedule of possible shutdowns during the day and week.

Russian President Vladimir Putin he sent greetings to the participants and guests of the Baku Eurasian Economic Forum, stressing that Russia will continue to strive to create stability and prosperity in Eurasia. Tass reports it. Every year the importance of Eurasia grows, new centers of economic growth are strengthened, integration groups emerge and their potential is combined. Cooperation between the states of the region is based on the principles of sovereignty, equality, mutual trust and respect. Russia, for her part, will continue to make active efforts aimed at forming a continental space of peace, stability and prosperity in Greater Eurasia, says Putin’s message.

08:37 – Filorussi, in the night the Crimea power plant hit

The Crimean power plant was hit in the night by a drone attack: the pro-Russian authorities announced it. Today in the night there was a UAV attack (unmanned aircraft, ed) to the Balaklava thermal power plant, Moscow-installed governor of Sevastopol, Mikhail Razvozhayev, said on Telegram. The transformer was minimally damaged. There were no casualties, he added.

Russian forces have launched 18 air strikes against Ukraine in the last 24 hours: the General Staff of the Kiev Armed Forces announced this morning, as reported by the Kyiv Independent. The Moscow army also launched four attacks with cruise missiles and 56 with multiple launch missile systems (Mlrs) in the same period. At the same time, the Ukrainian army repulsed the Russian offensive near Bilohorivka in the Lugansk region and near Bakhmut, Ivanhrad, Soledar, Maiorsk, Krasnohorivka and Marinka in Donetsk.

7:44 am – Blinken: We are doing everything possible to help Europe

The United States is doing everything possible to help Europe cope with the fallout from the conflict in Ukraine, especially on the energy insecurity front. This was stated by the US Secretary of State, Antony Blinken, during an interview with Bloomberg News relaunched by the State Department. According to the secretary, the roughly nine months since the start of the Russian aggression (on Ukraine) have been remarkable in terms of Europe’s distancing from the dependence on Russia that had been consolidated for decades. According to Blinken, Europe has already significantly reduced its dependence on Russian oil and gas, a development that will have a profound strategic impact in the years and decades to come.

07:40 am – UN optimistic about the return of grain supplies to world markets

A senior UN official says he is relatively optimistic that the agreement for the return of Ukrainian wheat, Russian wheat and fertilizers to world markets will be extended beyond mid-November. But the Russian ambassador to the United Nations says Moscow must first see the movement of its own exports. Both commented on the deal brokered by the United Nations and Turkey in July. It brought in over 8.5 million tons of food from three Black Sea ports in Ukraine. But the Russian envoy says that the Russian shipment to world markets never took place

06:16 – Environment, the Kremlin could block marine protections in Antarctica

Delegations from Russia and Ukraine are among those to meet in Australia this week to decide the future of Antarctica’s pristine waters. Some experts say new marine protected areas and rules are badly needed to prevent overfishing, but that Russia could use its veto powers to block progress once again. Reaching the consensus required for new action between this heterogeneous group of 27, which also includes China, the United States and the European Union, has always been an immense challenge. And when two of the members are at war, and relations between China and many Western nations have deteriorated, consensus has become an even greater obstacle.

Ukraine: Russia strengthens Kherson, recruits as “cannon fodder” Ukrainian military intelligence told CNN Milan, 27 Oct. (askanews) – Russia is strengthening Kherson with recruits using them as cannon fodder. Ukrainian military intelligence says Moscow is strengthening the city with recently mobilized soldiers. The head of the Defense Intelligence Agency of Ukraine, Major General Kyrylo Budanov, he told CNN that the Russians are trying to remove and take with them all the remnants of their so-called administration and are bringing new “cannon fodder” with newly mobilized Russian soldiers to Kherson, preparing for the fighting on the ground.

04:42 – Ukraine is a candidate for EU membership. But the path remains long

Ukraine: Borne, accelerated entry into the EU undesirable French Premier, barbaric violations of war laws by Russia. The accelerated entry of Ukraine into the European Union is not in the interest of the EU or of Kiev, he said last night French Prime Minister Elisabeth Borne quoted by the Russian media. Ukraine unanimously obtained the status of candidate country for EU accession at the June European Council. The path to membership is long and laborious. There will be no expedited procedure or simplified requirements. It would not be in the interests of either the EU or Ukraine, Borne said, according to Tass. In a debate in the French Senate on the war in Ukraine, the premier stressed that Russia will have to answer for barbaric violations of the laws of war, reports the French agency AFP.

04:38 – The UN maps the damage to Ukrainian cultural heritage via satellite

The United Nations will use before and after satellite images to monitor the damage done to Ukrainian cultural heritage by Russian aggression: the related tracking platform will be presented within a few weeks. The damage, from the day of the invasion to today, would concern 207 cultural sites: 88 religious sites, 15 museums, 76 buildings of historical and artistic interest, 18 monuments and 10 libraries. The most affected areas are in eastern Ukraine and around the capital: Donetsk the most affected with 59 damaged cultural sites, followed by Kharkiv with 51, Kiev with 30 and Luhansk with 25. Our conclusion that the negative picture could be keep getting worse, he admitted Krista Pikkat, Unesco director of culture and emergenciesat a briefing in Geneva: Our primary responsibility is to make sure we have information available about the sites and the situation they are in, to be ready for recovery.

03:29 am – Russian attacks on Zaporizhzhia. No information on any victims

Russian attacks overnight on Kiev oblast and Zaporizhzhia, according to local authorities cited by the Kyiv Independent. Governor Oleksiy Kuleba he reported that Moscow has targeted one of the communities in the capital region, without specifying which one, but stating that according to preliminary information there are no victims. From Zaporizhzhia, interim mayor Anatoly Kurtev reported that Russian forces have hit the city and the surrounding area, causing a fire. No information on casualties and other harms is currently available.

We will continue to support Ukraine, along with our allies and partners around the world, while defending itself from Russia’s brutal aggression. We must keep NATO strong and united as we face today’s threats and tomorrow’s threats. American President Joe Biden said so meeting with the leaders of the American Defense. The United States therefore accelerates plans to upgrade the deployment of new nuclear bombs at NATO bases in Europe. According to some sources, the arrival in the Old Continent of the updated B61-12 gravity bombs, originally planned for next spring, now scheduled for December. The rumor about the replacement of older weapons with newer versions comes at a time of high tension following Russia’s threats about the possible use of nuclear power in Ukraine.

Videogames entered his life in the late '80s, at the time of the first meeting with Super Mario Bros, and even today they make it a permanent part, after almost 30 years. Pros and defects: he manages to finish Super Mario Bros in less than 5 minutes but he has never finished Final Fight with a credit ... he's still trying.
Previous Napoli first in the group if … does not lose to Liverpool with a difference of four
Next Thunderbolts, will Rachel Weisz’s Melina also return? let’s talk about