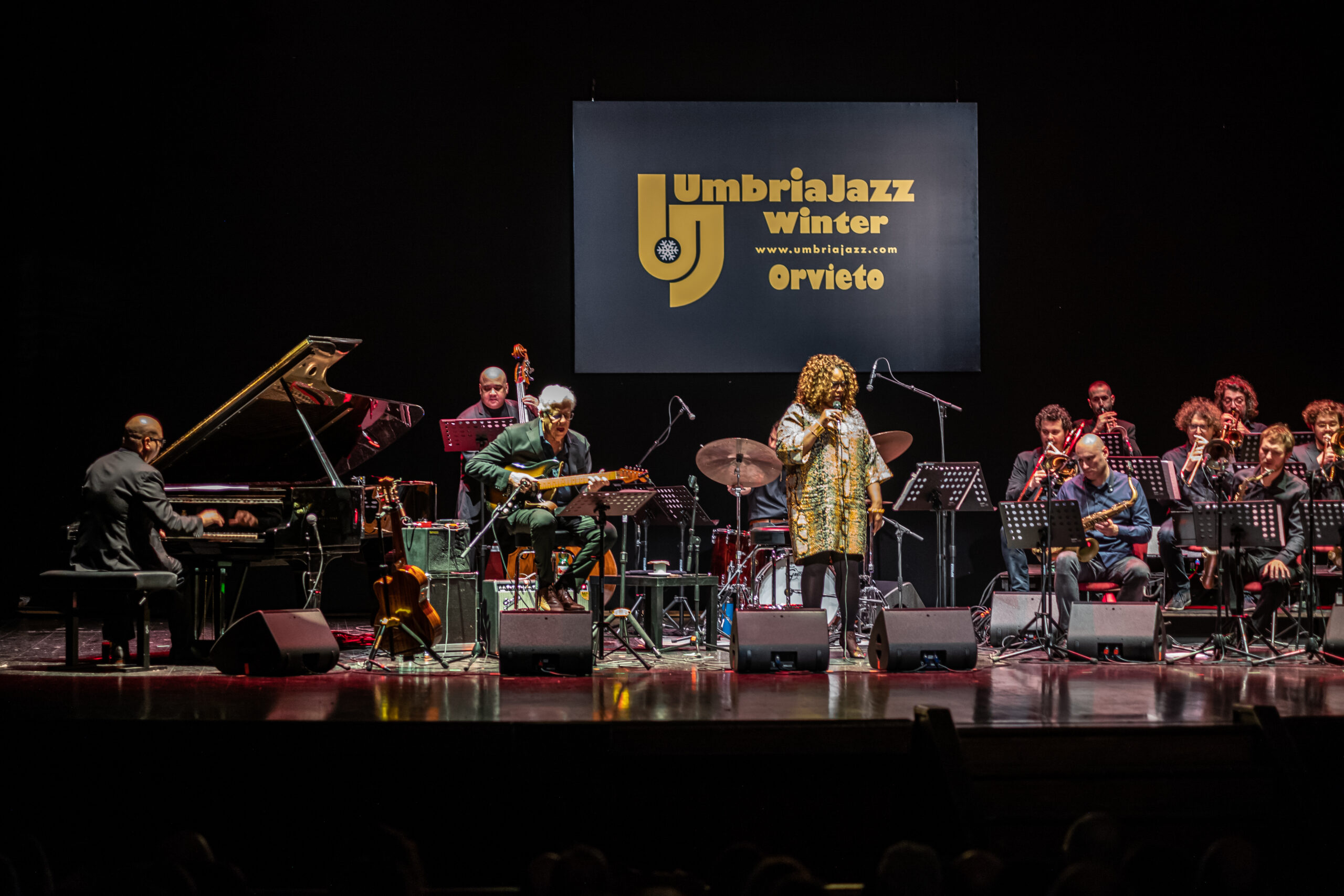 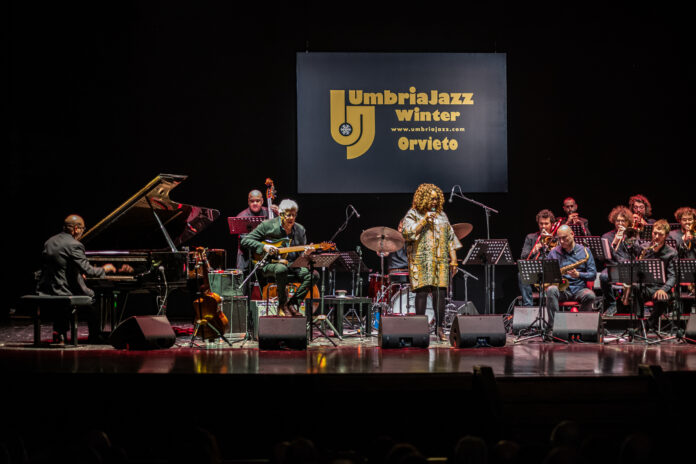 A choral dedication accompanies this twenty-ninth edition of Umbria Jazz Winter: the one a Franco Fayenzjournalist, writer, music critic who recently passed away, who followed Umbria Jazz – sharing a healthy friendship with Carlo Pagnottapatron of Umbria Jazz – since the dawn of the festival. Enzo Capuaan excellent master of ceremonies, has never failed to mention his illustrious colleague, whose spirit – represented by one of his aphorisms – also makes a fine show in the festival brochure.
That said, UJ has had a few fewer strings to its bow this winter. Those who were used to a hangover of concerts in various venues (some even free) had to review their plans, because this year there were only two venues (Palazzo del Popolo, Sala 400 and the Mancinelli theatre) and free admission was ban; which can only be good for the Italian musical culture (especially jazz) too accustomed to free admission.
The only free performances were those of the tasty and bombastic harmonies of the Funk Offmasterfully led by Dario Cecchini, who invaded the Romanesque streets of the historic center of Orvieto.
Five intense days, but without too much stress and embarrassing coincidences, which kicked off on December 28 with the concert of Five Angry Menwinners of the Conad Jazz Contest 2022. In the evening, the Mancinelli theater hosts the double concert.

The event opens on Allan Harris Kate’s Soulfood. The acrobatic ensemble has the French harmonica player as a welcome guest Gregoire Maret which, if needed, demonstrates all its ability to tame the small and insidious instrument. The workforce is completed by Francis Fratini (trumpet), Irwing Hall (tenor sax), Arcoiris Sandoval (piano), Marty Kenney (low), Norm Edwards (battery), Massimo Orselli (percussion). The running-in of the first piece (New Day) with the handbrake on, is immediately overtaken by Open Up, with a solo by Arcoiris which reveals a philological competence of the jazz tradition. Gradually the small ensemble gains confidence and gains in orchestrality, without neglecting the solos that come as small compositional jewels. It makes your hands peel Irwing Hall, which acts in circular breathing, pouring out notes in clusters; Fratini’s solos are excellent and weighted; valuable ones by Sandoval, which gives new life to a successful re-edition of Nature Boy, in up-tempo. Unleashed, a real one drum machines it is Edwards, who always joyfully holds court and seals his tireless work with the cajon by revealing an irrepressible creativity. Gregoire Maret makes you jump off your chair: an overflowing river, bop, soul, funk; he knows how to accompany, but he knows how to get on the run and drag the listener by building unparalleled rhythmic buildings with a technical dexterity enslaved to a very mobile and rapid thought.
The voice of Allan Harris it is soulful, full of grace, well modulated (not powerful), it resembles that of Al Jarreau, which seems to be its source of singing inspiration.

The second set is the highlight of the Umbrian show: the tribute to Burt Bacharach by Dianne Reeves with the Umbria Jazz Orchestra conducted by Ethan Iverson, who also arranged the songs in the lineup. Guest of the ensemble the trusted guitarist of Reeves, Romero Lubambo.
The writer has attended all the reruns of this partnership, above all because he is not convinced of what happened on the opening night. The lineup has remained unchanged, but compared to the overture, the «music has changed». If on the first evening Dianne Reeves, always magical and with an engaging and impetuous stage presence, appears in slight expressive difficulty, hidden by not entirely happy arrangements and by a trio, that of the pianist Ethan Iverson (Peter Washington on double bass and Dan Weiss on drums) not in line with Reeves’ torrential vocalism, everything changes from the second rehearsal. Bacharach’s pieces illuminate the sober and elegant structure of the Mancinelli e What The World Needs Now Is Love, Do You Know The Way To San Jose, I’ll Never Fall In Love Again, Don’t Make Me Over, The Look Of Love, Say A Little Prayer(There’s) Always Something There to Remind Me, Walk On By, Alfie, Raindrops Keep Fallin’ On My Head, follow one another to the great pleasure of the public. Let’s leave the premiere of this concert to be archived and let’s start with the second rehearsal. Dianne Reeves takes measurements on a particularly invasive horn section, with which she engaged in a single combat that lasted four days. And this is not due to the demerit of the orchestral players – all very good, attentive and highly professional – but due to the lively arrangements, so to speak, and not entirely appropriate to the reality of the ensemble. On the other hand, Iverson didn’t put his hands in a substantial way, but left harmonies and melodies intact (or almost). The writing, the scores, however, were made in such a way as to satisfy a rhythmic-harmonic profile without a voice being counted. In fact, from the very first evening, Reeves’ best moments were those in duo with her alter ego Romero Lubambo, and also when she duetted with Iverson in Alfie: practically sung a capella. It was said that, from the second evening onwards (we should say the third, given that Reeves and his friends were guests in L’Aquila on the 29th) everything changed: or quite a lot. The Detroit singer, winner of five Grammy Awards, took distances and measures by imposing her patterns, above all keeping the rhythms at bay, playing with the audience, intoning playful songs and, on December 31st, she sublimated all these aspects with a performance to frame. In short, for Dianne Reeves mission accomplished. The ladder bacharachian it was always preceded by a miniature suite by Iverson, particularly pleasant and catchy: in Bacharach style with accents, in the second movement, on an orchestration of a classical matrix.
Alceste Ayroldi

The photos were kindly provided by the Umbria Jazz press office.

David Martin is the lead editor for Spark Chronicles. David has been working as a freelance journalist.
Previous Tonight on TV: the must-see movies for Wednesday, January 4, 2023
Next saint of the day, birthdays, horoscope