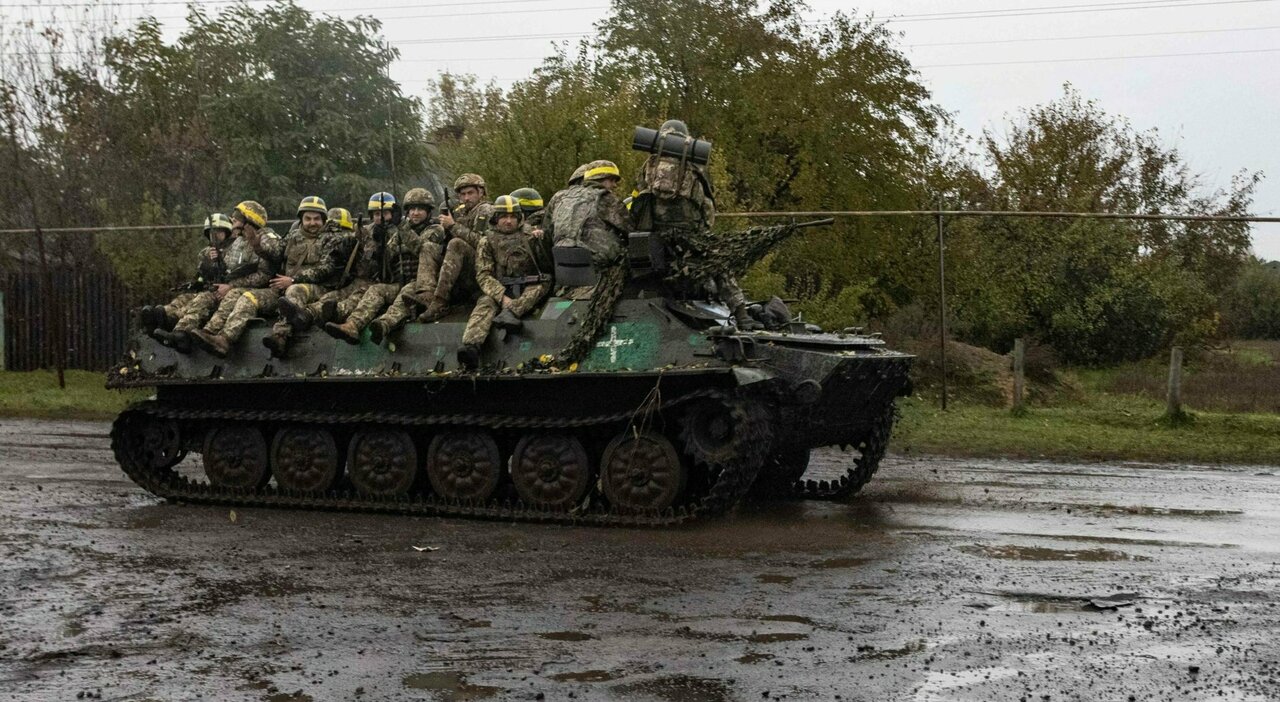 War in Ukraine, live. Moscow to the US: “We will start nuclear exercises”

USA: “Russia has communicated that it will start nuclear strategic exercises”

Europe will give Ukraine 1.5 billion euros a month

The reconstruction of Ukraine is a task that will take a generation and must begin immediately. In Berlin, Olaf Scholz and Ursula von der Leyen attended the first conference dedicated to the Marshall Plan for Kiev, and the president of the EU Commission has promised a substantial commitment: Europe will work to pay 1.5 billion euros a month to the Ukraine, to support a third of its budget needs, as long as there is conflict. Moreover, it was Volodymyr Zelensky himself, connecting via video, who asked the forum participants to support Ukraine in covering next year’s $ 38 billion deficit. The other two thirds should be covered thanks to the support of the US and the intervention of international bodies, such as the IMF and the World Bank. However, liquidity to keep the state on its feet is only one of the three pillars on which to intervene: it is necessary to move to immediately repair “schools, hospitals, and energy infrastructures”, explained von der Leyen, and then for the actual reconstruction work. The Ukrainian Prime Minister, Denis Schmihal, citing the World Bank, reported the estimates for this last piece of 750 billion. In the hours in which the German president, Frank-Walter Steinmeier, is on a (surprise) visit to Kiev, Scholz spoke again to reiterate Germany’s support: “We are here to support the vision of the future of our Ukrainian friends. He began. “Today is not a donor conference”, he also clarified, explaining that he had convened a series of experts “the most intelligent and capable minds” to study something more basic, “concerning the structures and mechanisms” of financing the reconstruction in which it engages with the G7. “We can’t say when this war will end. But it will end. And just by weighing the experience made in our history, we know that reconstruction is always possible and that it is never too early to start dealing with it ». “We must start now,” for the chancellor. Immediately afterwards, the word was passed to Zelensky, who said that “Ukraine in some ways has already deserved entry into Europe”, fighting for its security. “It is good for Europe and Ukraine to think together”, he added, after quoting the Bundeskanzler, who yesterday said: “Anyone investing in Ukraine must know that they are investing in a future EU member state”.

Card. Parolin: good opening of the Kremlin to dialogue

“This is positive, that there is an opening of this kind evidently it is a generic opening that will then have to be realized taking into account all aspects but that there is a willingness to speak seems to me a sign”. The Vatican secretary of state, card. Pietro Parolin learning from journalists the statements of the Kremlin spokesman, Dmitry Peskov. Peskov explained that the Kremlin is not opposed to the participation of the Pope and the US in the search for a solution to the conflict in Ukraine.

Moscow to the UN: Kiev wants to throw dirty bombs and accuse us

The Russian army fired on a car in which a family was staying, killing the father and the 14-year-old son, while the 5-year-old daughter was injured: Yevhen Ryshchuk, the mayor of Oleshky, announced on Facebook. in Kherson Oblast. A finger of one hand was amputated from the girl. The Ukrainian media reported it. Ryshchuk reported that Russian troops are “very nervous” and “shoot anyone they think poses a threat.”

A Moscow Court of Appeal today upheld the nine-year prison sentence for American basketball player Brittney Griner, found guilty of drug possession. This was reported by the Interfax agency.

Moscow today welcomed the proposal of the French president, Emmanuel Macron, to include Pope Francis and the US authorities in the talks for the solution of the situation in Ukraine: the Kremlin spokesman, Dmitri Peskov said, as reported by Tass. Yesterday Macron asked the Pope to call the Russian President, Vladimir Putin, the Russian Orthodox Patriarch Kirill and the American President, Joe Biden, to “promote the peace process” in Ukraine.

Iran: ready to discuss drones in Moscow with Kiev

Tehran is ready to hold talks with Kiev regarding the supply of Iranian drones to Moscow which, according to the US and Kiev, were used in the conflict in Ukraine. This was stated by Iranian Foreign Minister Hossein Amirabdollahian, as reported by Irna, categorically denying that Iran has sold arms to Russia for use in Ukraine. The issue should be examined by “military experts from Iran and Ukraine,” said Amirabdollahian, letting it be known that he had also told the European Union High Representative for Foreign Affairs Josep Borrell.

An explosion occurred near the offices of the Russian channel ZaTv in Melipotol, occupied by the Russians, and allegedly injured at least five people, including some civilians and employees of ZaTv, which on 1 August started broadcasting in the occupied areas of the region. Ukraine of Zaporizhzhia. This was reported by the Guardian, which relaunches news from Nexta TV and talks about the explosion of a car, specifying that it is not clear whether it was an attack or an accident. The Kyiv Independent quotes the Ukrainian mayor of Melitopol, Ivan Fedorov, and refers to the explosion of a car near the FSB headquarters and the premises used by a Russian TV.

Zelensky: Ukraine deserves to be part of the EU

«This vision of Ukraine as a European country is very important. And in many ways Ukraine has already deserved to be a part of it. People see what we already do for Europe. We represent the physical security of Europe ». This was stated by the Ukrainian president, Volodymyr Zelensky, who, speaking at the Reconstruction conference, underlined the words of Olaf Scholz pronounced yesterday, when the chancellor said that those who invest in Ukraine invest in a future member of the EU. “We are not only fighting for the security of Ukraine and our neighbors, but also for the security of Europe,” he added.

Russian forces bombed the Nikopol district, in the Dnipropetrovsk region (south) last night, according to the head of the regional military administration, Valentyn Reznichenko, reported on Telegram, as reported by Ukrinform. “They used Grad Mlrs (multi-launch missile systems, ed), heavy artillery and kamikaze drones. Three communities – Nikopol, Marhanets and Myrove – came under enemy fire, ”wrote Reznichenko. According to preliminary information, there are no injuries or victims but homes, cars, a food company and a water network have been damaged. In other areas of the region, anti-aircraft sirens were heard all night, but there were no attacks.

Ukraine is asking Italy for anti-aircraft defense weapons, said President Volodymyr Zelensky in an interview with Corriere della Sera. And he refers to his telephone conversation with Giorgia Meloni: she said she was in favor of the “common alliance” in the EU and “assured her full support against Russian aggression”. She invited her to Kiev: “And she replied that she will come.” “I think we have built an excellent relationship in continuity with the period started by Draghi,” reflects the Ukrainian president. To those who claim that he is in Kiev seeking peace, Zelenky replies that he has always wanted to speak, “but not with the gun aimed at his head.”

Electricity is back in Kiev

The Ukrainian energy operator Ukrenergo has canceled the electricity cuts introduced in recent days in Kiev in order to stabilize the flows, giving residents the possibility of drawing on electricity all day, inviting the population to use it wisely and sparingly. The utility company Dtek told the UNIAN agency in a statement. The communiqué underlines that the situation of the energy system remains difficult. “To support the electricity system, we urge all residents of the capital to consume electricity moderately – turn on appliances one at a time, reduce electricity consumption as much as possible in the morning from 06:00 to 11:00 and in the evening from 17:00. at 23:00. We ask business customers to limit the use of outdoor lighting on the facades of offices, restaurants, shopping centers “, urged Dtek stating that” these simple steps will help reduce the need for disconnections and the number of disconnected users “. The interruption of supplies was made necessary due to the damage caused to the power plants by the Russian bombing.

Videogames entered his life in the late '80s, at the time of the first meeting with Super Mario Bros, and even today they make it a permanent part, after almost 30 years. Pros and defects: he manages to finish Super Mario Bros in less than 5 minutes but he has never finished Final Fight with a credit ... he's still trying.
Previous Champions League: Chelsea and Psg in the second round. Real ko in Leipzig, equal City-Dortmund | First page
Next Bulgari and Zendaya, high jewelry from the dream to the red carpet: here is the magic revealed