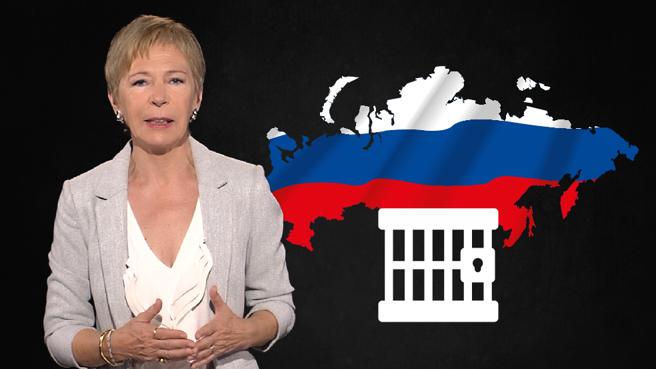 Zero tolerance. This is how dictatorships work. And the punishment against criticism, even the most veiled, ferocious: made official by law from March 4 this year with a new administrative article on the discrediting of the armed forces. It is not necessary to take to the streets to be arrested, just sew a patch with a dove of peace on a jacket. happened to Anna Gorovets, stopped by the police in a bar while she was having a coffee. 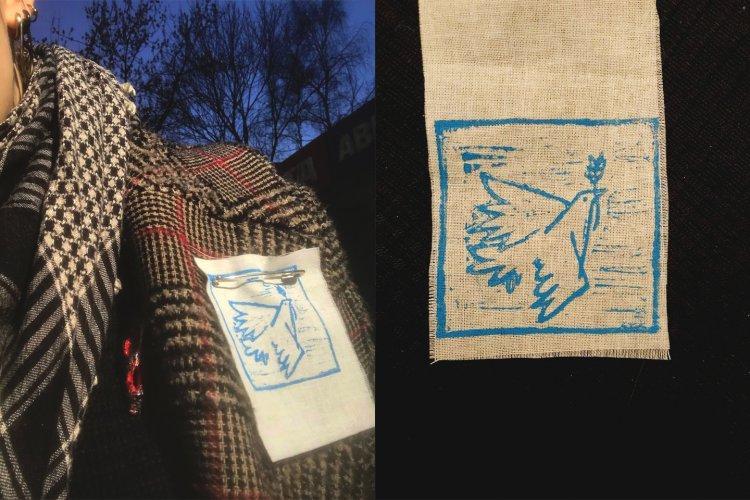 Anna Gorovets’ coat with a dove of peace patch

Article 20.3.3 of the Code of Administrative Offenses provides for a penalty from 30 to 50 thousand rubles (from 500 to 837 euros) for people who publicly express their disagreement with the war. For those who organize or participate in unauthorized events, the penalty ranges from 50 to 100 thousand rubles (from 837 to 1674 euros). To date, at least 1,258 people have been sanctioned. Criminal proceedings are triggered for repeat offenders: the fine goes up to 300 thousand rubles (5021 euros), and you risk forced labor or imprisonment up to 15 years (articles 207.3 and 280.3 of the criminal code).

From prison to psychiatric hospital

Aleksey Gorinov And Ilya Yashin, activists of the opposition Solidarity movement and advisers from the Krasnoselsky city hall in Moscow, were arrested on 26 April and 27 June respectively for criticizing the war and accusing the Kremlin of disinformation. The first was sentenced on 8 June to seven years in prison, the second still in preventive detention. Dmitry Talantov, president of the Bar Association of the Republic of Odmurtia, was arrested on 28 June for criticizing the invasion of Ukraine on Facebook. The priest of the Orthodox Church has been in preventive detention since June 7 Ioann Kurmoyarovhis guilt is that of having expressed words of accusation against the invasion of Ukraine on his YouTube channel.

Aleksandra Skochilenko, a young artist from St. Petersburg, on April 11 entered the city’s supermarkets and replaced the price tags with information about the war. been immediately arrested and then transferred to a psychiatric hospital for a mental health assessment. she is still detained, she is denied medical treatment and she faces 10 years in prison. 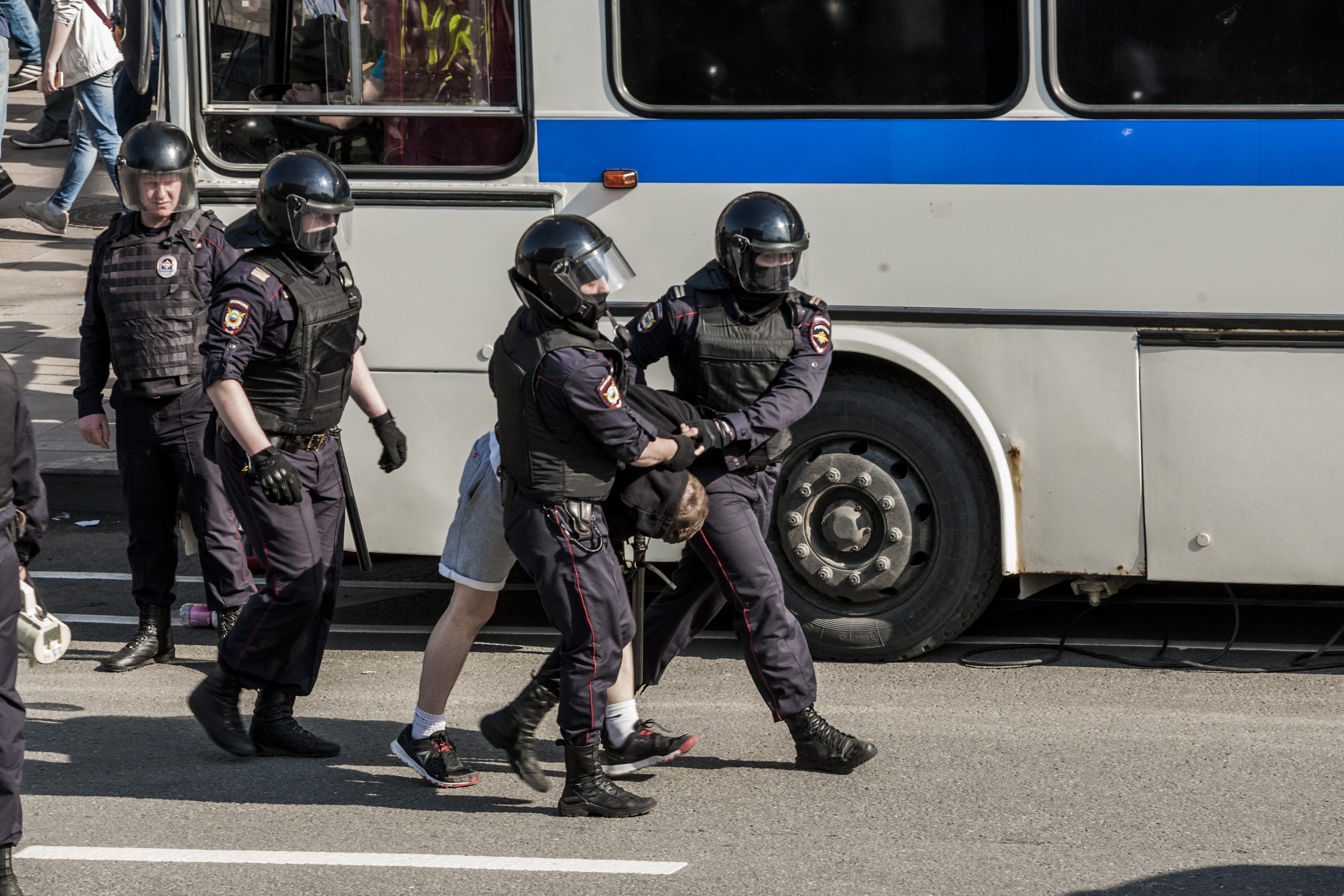 The global numbers of repression

According to OVD-Info, a Russian non-governmental organization for human rights, 17,000 people have been arrested since 24 February among demonstrators on the street, for anti-war posts on social networks, for displaying symbols or writings opposed to the special operation. 282 are criminally indicted, of which 149 are still in prison. The allegations are of forgery (103), vandalism (38), terrorism (17), discrediting the military (17), instigation or propaganda of terrorism (12), violence against a representative of the authority (12), and other crimes various (83).

The Nobel Peace Prize awarded to the NGO Memorial

Furthermore, from 24 February 99 people and the organization were accused, without evidence, of espionage under the Foreign Agents Act and defined as undesirable. Among these there is also the humanitarian organization Memorial, awarded this year the Nobel Peace Prize. Memorial born in 1989 by Andrei Sakharov to document the crimes committed by Stalin. As of December 2021, the Organization incorporated 50 Russian NGOs and 11 from other countries, including Ukraine, Germany, Italy, Belgium and France. Well, on April 5, all activities were blocked, and last month, a few hours after the Nobel Prize, the seals were affixed. Even the former president of the association, the 69-year-old biologist Oleg Orlov, last May was stopped by the Russian special forces in front of the Bolshoi theater while exhibiting a sign that read: Putin pushes the world towards nuclear war. Others undesirable are Novaya Gazeta Europa chief editor Kirill Martynov, blogger Kirill Fedorov, journalist Sergei Loiko, political activist Yulia Galyamina, TV presenter Maxim Shats, political scientist Sergei Medvedev and Amnesty International, whose Moscow office has been closed . To date, according to Reporters Without Borders, 172 foreign agents are defined, including journalists and newspapers. The provision imposes the obligation to declare it at the head of everything they publish and to provide the Ministry of Justice with the declarations of all entries and exits, under penalty of a fine or imprisonment of up to five years. 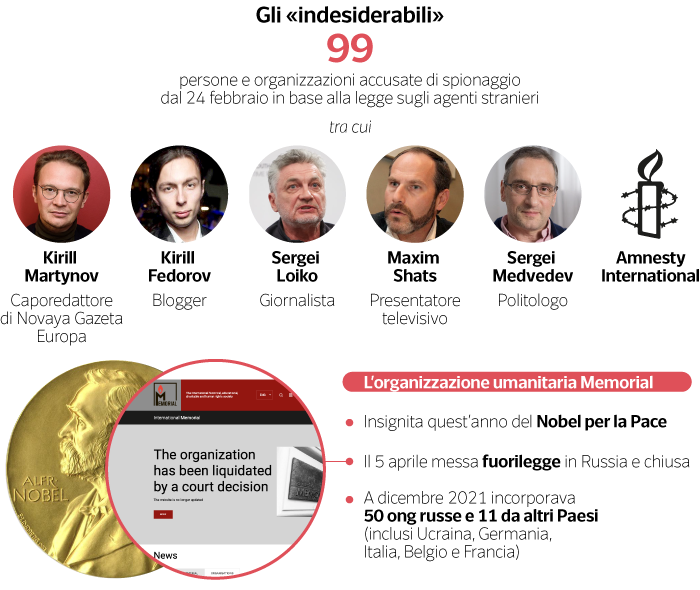 Twelve journalists have been arrested, and seven of them are still in prison or under house arrest. Marina Ovsyannikova, former journalist of the state TV Channel 1 who became famous for interrupting the news on the evening of March 14 by displaying an anti-war sign, was arrested on August 10; Maria Ponomarenko, journalist of the RusNews portal, arrested on April 24 in St. Petersburg for giving an account of the Russian bombing of the Mariupol Theater of Dramatic Art, was interned in a psychiatric hospital and then placed in pre-trial detention. Vladimir Kara-Murza, activist and journalist, was arrested on April 12 and never released: he had returned from the USA where in front of the Arizona Chamber of Deputies he had condemned the use of cluster bombs by Russian forces and their attacks on schools and hospitals. Sergei Mikhailov, owner of Listock, a small independent newspaper in eastern Siberia, was arrested on April 14 and faces up to 15 years in prison for publishing articles on the Bucha massacre. 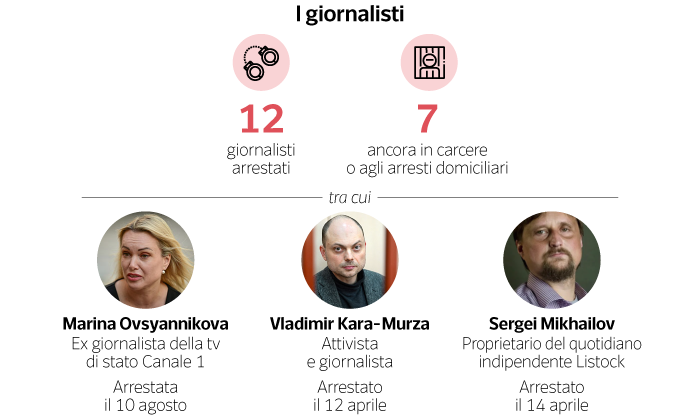 According to the Russian NGO Roskomsvoboda, since the beginning of the war, at least 7,000 websites have been blocked or restricted by the Russian authorities, in addition to the known cases of Facebook, Instagram, BBC News, Radio Liberty, Clarin, the Japanese portal TBS, Deutsche Welle, The New Times and the parts of the Human Rights Watch site that concern Crimea. Media license revoked for digital edition of Novaya Gazeta and popular news site Meduza. Quora (forum platform where users can post questions and answers on any topic), Canva graphic design, the air quality test service aqicn.org and the free Pexels photo service have been blocked. The Moscow court fined Google 21.7 billion rubles (347 million euros) for failing to remove what Russian authorities call inaccurate information on the course of the special military operation in Ukraine. Yandex, the leading Russian-language search engine, has meanwhile removed independent media from its search results. In an attempt to isolate Russia from the rest of the world, the Russians responded by downloading thousands of VPNsthe Virtual Private Networks which, thanks to a particular system called tunneling, allow you to make your activities on the Net invisible. In fact, we have gone from 13/15 thousand downloads per day before the war to an average of 300 thousand per day in these eight months.

The suspicious deaths of the oligarchs

Over the past eight months, sat least 16 Russian businessmen and oligarchs who lost their lives in circumstances that are not entirely clear. Three of themin particular, they died after publicly criticizing the Kremlin. Two were on the board of directors of the energy giant Lukoil, which in a note in March had called for the rapid end of the armed conflict (in Ukraine ed) and its resolution through a process of negotiation and diplomatic means. The 43-year-old billionaire Alexander Subbotin, a member of the board of directors of Lukoil, was the first to die on 8 May from a heart attack: his body was found in a suburb of Moscow in the residence of an alleged shaman. On September 1, however, Ravil Maganov, president of the Lukoil Board of Directors, dies: he falls from a window on the sixth floor of the Central Clinical Hospital in Moscow, the establishment’s clinic, where he was hospitalized for a heart problem. The third is 52-year-old Dan Rapoport, an oligarch once close to the Kremlin who later became a critic of Putin and an open supporter of the opposition leader Alexei Navalny: who died on August 14, falling at night from his luxurious apartment in a Washington building.

Educate them as children

The last frontier is that of school indoctrination. If on the one hand, in Kiev, children’s literature is flourishing in a patriotic key, on the other in Moscow since September elementary school pupils have one more subject: Patriotic education of citizens of the Russian Federation. A propaganda measure that is added to the rewriting of the didactic history books to remove any reference to Ukraine and Kiev. An attempt at collective repression that passes through the manipulation of the most defenseless minds.

Videogames entered his life in the late '80s, at the time of the first meeting with Super Mario Bros, and even today they make it a permanent part, after almost 30 years. Pros and defects: he manages to finish Super Mario Bros in less than 5 minutes but he has never finished Final Fight with a credit ... he's still trying.
Previous Bagnaia close to the title, but there is an air of tension in Ducati
Next here are councilors and proxies – Il Golfo 24