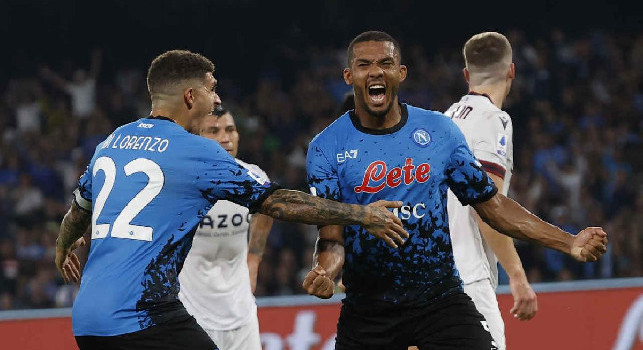 “We are a family, let’s not think about chatter! Ready for Sassuolo, about Kim and Anguissa …”

Juan Jesusdefender of Naplesspoke to the microphones of Kiss Kiss Naples during the program Radio Goal.

Juan Jesus spoke of many issues on the moment of Naples from Spalletti. Here is what is highlighted by CalcioNapoli24.it:

In the Champions League, when the group came out, everyone said it was difficult. We demonstrated our strength on the pitch, without thinking about the chatter that was being made outside or who did not believe in us. Let’s play at Anfield as if it were the first game, we want to finish first in the group because then we would have the second home game which is fundamental with our audience.

I don’t know if this Napoli is the strongest I’ve played in, because one year at Roma we had a very strong squad with so many champions and it was a shame not to win. Here there are many young people who are proving to be strong, they are different years but both strong teams.

About Kim: “He is a very powerful player, strong in the head and technically he is amazing. Few knew him, good Giuntoli to catch him.”

On Rome-Naples: “Winning head-to-head matches in a league like this counts half a point more, because these are games that make the difference. It was a bit of a dirty game but we were good at bringing it home.”

On Napoli-Sassuolo: “We are always ready, we do our job well even if there are many close matches. Today we had a good training and tomorrow we will do our best”.

About the group: “It’s a great group, but if we are in the Champions League we also owe it to last year’s group. There is still a long way to go, we have to finish well before the break. All the guys want to give 100% for the Naples.

Today it does not matter to have a certain age for the experience, in football you grow up much earlier even to manage your family. Personality and character are not lacking in these guys, because they all have a story “.

On upcoming games: “We think game by game, we want the three points because then in Bergamo it will be a very difficult game because they play great football. But now we only think of Sassuolo “.

About Anguissa: “He’s fine and ready”.

On the World Cup: “Brazil? I have high expectations, it is one of the strongest national teams. It aims at least for a semifinal, I hope it can win and bring the cup home.”

David Martin is the lead editor for Spark Chronicles. David has been working as a freelance journalist.
Previous Elenoire Ferruzzi, the rare PHOTO after coming out of the coma: unrecognizable
Next “No to that of a senator, pay me the ASL”