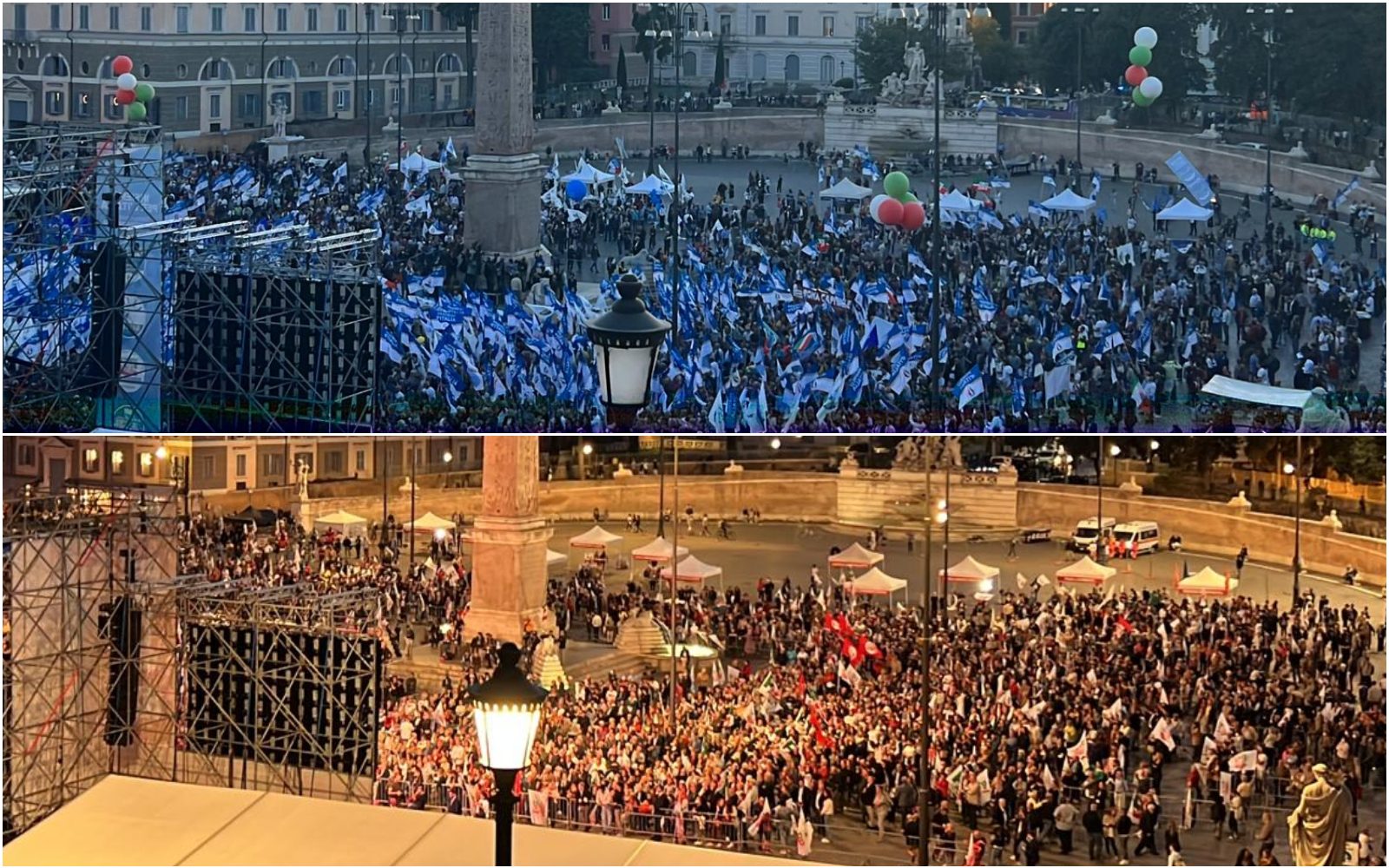 We compared the Piazza del Popolo of Letta and Meloni: there was no competition

At Piazza del Popolo in Rome, first the center-right and then the Democratic Party closed their electoral campaign, but the confrontation – when Meloni and Letta respectively spoke – was quite unequal.

Piazza del Popolo in Rome was the theater of the closure of the election campaign of the center-right first and then of the Democratic Party. Yesterday, the coalition given as overfavorite in the elections of 25 September, then the Democratic Party which tried to set up its entire campaign on being an alternative to the right. The comparison between the squares, however, is a substantial confirmation of what was seen in the polls – before there was the stop – and in the trends of recent months. That is a fairly clear majority for the center-right.

The difference between the two squares was not overwhelming, but the people who went to listen to the center-right rally were undoubtedly more. The two photos in comparison – specifically – were taken at the time Giorgia Meloni and Enrico Letta spoke on their respective stages. The leader of Fratelli d’Italia spoke last yesterday compared to her colleagues from the other parties – Berlusconi, Lupi and Salvini – while the secretary of the Democratic Party, of course, closed the event on stage this evening. Furthermore, the square of the Democratic Party was – in general – much colder than that of the center-right.

It must be said that, for the final act of a short but intense electoral campaign, neither the center-right nor the Democratic Party have managed to fill Piazza del Popolo. + Europe and the Greens and the Left are allies with the dem, but they closed their electoral campaigns yesterday. Among other things, Letta also participated in that of Emma Bonino’s party. In short, it is only a comparison between squares and the result at the polls does not necessarily have to reflect what we saw today and yesterday in Rome. But an idea of ​​what the balance of power is, once again, the square has given it back. Now the leaders are preparing for their speeches on the night between Sunday 25 and Monday 26 September, when the election results arrive and there will be no more room for speculation.

Salvini says he has the balls full of migrants who disembark

Videogames entered his life in the late '80s, at the time of the first meeting with Super Mario Bros, and even today they make it a permanent part, after almost 30 years. Pros and defects: he manages to finish Super Mario Bros in less than 5 minutes but he has never finished Final Fight with a credit ... he's still trying.
Previous “It must not happen!”, Then the comparison on Miretti
Next Avatar returns to the cinema for a weekend of nostalgia

“I continue to read unreal reconstructions regarding possible ministers of a center-right government. After unsuccessful …