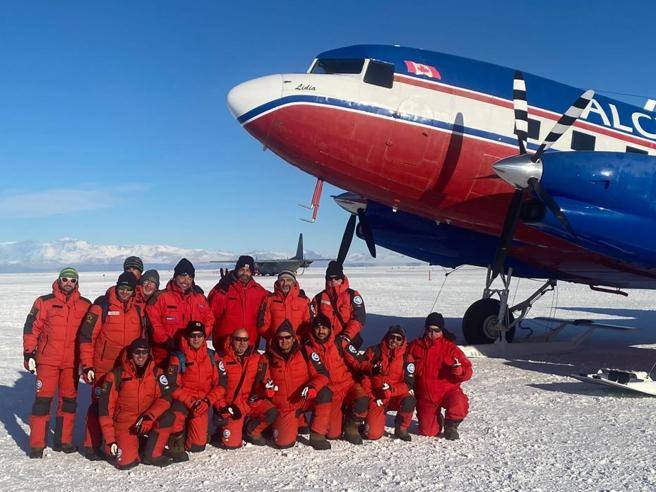 Over 50 projects. The subsoil will be drilled to reconstruct the climate of a million and a half years ago. But the goal in three years will reach 3,000, in the ice we will be able to read the future of the planet

Thirty-eighth expedition, 240 researchers and more than 50 scientific projects. These are the numbers of the Italian expedition to Antarctica that will come alive in a few days. And with an objective, we could say, a cut above the others (at least for the effect of evocative fascination that it brings with it): dig into the deepest ice up to 1.5 million years ago. Time travel at minus 80 degrees. And absolutely in the name of science. We are talking about the Beyond Epica Oldest Ice project, an international activity funded by the European Union and which sees Italy as one of the major leaders in research. We started last year, but the project was born in 2019but was then interrupted due to the pandemic: excavation will be carried out in the field set up at Little Dome C, 35 kilometers from the Italian-French base ‘Concordia’, on the Antarctic plateau at over three thousand meters above sea level and 1,200 kilometers from the coast, he says. Professor Carlo Barbante, lecturer at the Ca ‘Foscari University of Venice and director of the Institute of Polar Sciences of the Cnr.

Seven hundred meters under the ice

Barbante expert in climatic and environmental reconstructions, and the Beyond Epica Oldest Ice project, funded by the European Union and coordinated by Cnr, and in which Enea (the National Agency for New Technologies, Energy and Sustainable Economic Development) is participating and Ca ‘Foscari University, will try, in fact, to understand what the climate of the planet was a million and a half years ago. We study the past to better understand the present, Barbante observes, recalling that, last year, we had already reached the depth of 130 meters, but that the goal, from today until mid-February 2023, will be to reach a depth of 700 meters. For next spring, the samples taken from the ice, the so-called carrots will be brought to Europe for examination: some of these will be sent here in Venice, in the laboratory of the Institute of Polar Sciences, adds the expert, recalling the meaning of all this research: Obtaining information on how the climate was on Earth, between eight hundred thousand and one and a half million years ago, to better understand our future anthropogenic changes.

And the question arises spontaneously: what does the climate influenced by human actions have to do with that of a million and a half years ago, when there were no industries and crazy traffic? It is essential to study the climatic variations of the past to understand what awaits us in the future: our attention aimed at the study of carbon cycles – due, for example, to episodes of volcanic eruptions – capable of influencing what is called the planet’s climate sensitivity, replies the geologist and researcher of a mission (Barbante was at the South Pole , last year, but not present in these weeks in the field) formed by a consortium comprising ten European countries: But there is not only Europe in Antarctica in search of the climate of one and a half million years ago: the Australians, for For example, they will start digging at another site no more than 5 kilometers away from ours.

He knows something about it Gianluca Bianchi Fasani, Enea researcher and leader of the Italian expedition to Antarctica. In these hours he is in Christchurch, New Zealand. The goal should have been Zucchelli base camp, but something strange forced them to postpone the arrival. At this moment we are at the American base of McMurdo, which at 350 kilometers from the Zucchelli field: an unusual condition of the thickness of the ice, of just over a meter (usually two meters) did not allow our cargo plane, a C130-J of the Italian Air Force, to land on the Italian base, explains Bianchi Fasani, underlining the consequences of all this, practically a feat in the enterprise: The most important problem is the movement of the cargo material: through a small aircraft, capable of carrying up to 18 people, we shuttle from the American base to the Italian one, and this operation is still in progress. Tomorrow, for example, another ten people will arrive destined for the Italian-French base, Concordia; and another thirty scientific personnel are expected to arrive next week.

And how much Antarctica is a continent destined for scientific research, you can understand it from the sense of collaboration between scientists from different nations. For the series, there is no need to put your own flag after a discovery: Without comparison there would be no scientific research: if the Australians were to be the first to touch the oldest ice in the world, we will confront them. For the sake of science there is just healthy competition, explains the expedition leader in Antarctica, who recalls two other important researches planned in this 38th expedition: We have a group of geologists ready to go 500 kilometers north of the Zucchelli station, to set up a field dedicated to the collection of volcanic material: the goal is a paleo-climatic reconstruction at the time of the eruption; while another group of scientists is working nearby trying to reproduce the Antarctic fish form.

Returning to the Beyond Epica Oldest Ice project, 35 kilometers from the Concordia field, it must not be a walk to work at minus 35 degrees: Yes, a further test for the good of science, says, jokingly, Saverio Panichi, of the Enea del Brasimone research center. , near Bologna, and in the next few days also in Antarctica: We plan to arrive there on November 1st and to start the first drilling a couple of weeks later. The long way: to reach the goal of three thousand meters, or one and a half million years ago, it will take another three years. All linked to ice cores, measuring three meters at most, to be sent to Europe to understand what the climate will be like in the near future. Meanwhile, the first piece of history from the past, the first ice core, preserved in the field set up at Little Dome C, in the heart of Antarctica. Waiting for it to start telling us everything about the past. Weather permitting.

Videogames entered his life in the late '80s, at the time of the first meeting with Super Mario Bros, and even today they make it a permanent part, after almost 30 years. Pros and defects: he manages to finish Super Mario Bros in less than 5 minutes but he has never finished Final Fight with a credit ... he's still trying.
Previous the Ready Bills of Friday 28 October 2022
Next Awards. People’s Choice Awards, “Top Gun: Maverick” dominates the nominations.