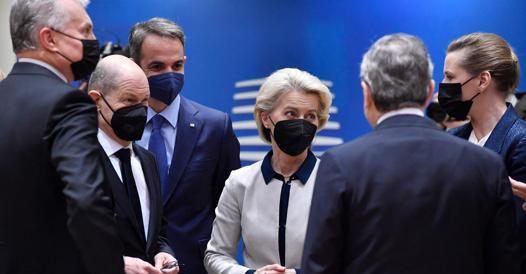 we will paralyze the Russian central bank, some banks outside Swift, we will hit the oligarchs – Corriere.it

BRUSSELS-MILAN – The European Union, the United States, Canada and Great Britain together strengthen the sanctions against Russia after the assault on Ukraine to cripple the president’s ability Vladimir Putin to finance his war machine against Ukraine.

He proposed to EU leaders the blocking of access to the Swift international payment system for some Russian banking institutions (probably eight: here is the explanation of what Swift is and why it is so important); there paralysis of assets of the central bank of Russia to freeze its transactions; the ban on Russian oligarchs from engaging in financial activities on Western financial markets.

Italy prepares to reduce gas consumption while the EU Commission is studying an emergency instrument to provide loans to Member States to mitigate sudden fluctuations in gas prices.

These would be common bonds on the model of Sure, the mechanism used during the pandemic to finance anti-unemployment interventions such as social safety nets.

The agreement on the new sanctions will have to be finalized in the next few hours, the foreign ministers of the 27 EU countries will virtually meet today at 6 pm.

The exclusion of Russian banks from the international payment system is one extreme move.

Yesterday Italy, Austria and Hungary had opened up to this option after the caution of recent days and Germany was the only EU country that remained against it, until a conditional green light came after Polish Prime Minister Mateusz Morawiecki on a visit to Berlin spoke of selfishness concrete. In a joint statement, ministers Annalena Baerbock (Foreign) and Robert Habeck (Finance) said they are working on a Swift’s targeted and functional limitation to limit collateral damage.

in the meantime Italian companies operating in Russia are holding their breath and hang on the words of the vice president of the Russian National Security Council, Dmitry Medvedev: Sanctions are a good reason to review our relations once and for all with the countries that introduced them.

500 Italian companies are registered in the Italian-Russian Chamber of Commerce. Its president, Vincenzo Trani, replies from Moscow: The almost 8 billion official exports of Italy to Russia do not do justice to the economic relations between the two countries – he says -. Many Italian products are sent to German, Austrian and Dutch platforms and from there to Russia.

Among the sectors most involved, food, furniture, machine tools, clothing and footwear.

Among the companies that have business in Russia, Barilla, De Cecco, Marr and Ferrero in food and then Danieli, Siad, Candy.

Concern also among companies working with Ukraine. We didn’t think it would come to this – says the president of Confindustria Ukraine, the Paduan manufacturer Marco Toson -. The families have returned, the entrepreneurs remain to preside over the companies.

Firms that have no ties to either Russia or Ukraine are also under strain. Industrialists fear that Russian gas will fail. The Mise yesterday declared a state of early warning, Snam warned the companies that have made interruptibility agreements that they could be disconnected.

According to some sources, the problem of blocking payments through the swift system could be circumvented, given that the Russians also operate through companies under European law.

But it cannot be ruled out that it is Putin himself to decide to reduce the supply.

He likes dogs, pizza and popcorn. Already a fanboy of Nintendo and Sony, but today throws anything. He has collaborated on sites and magazines such as GameBlast, Nintendo World, Hero and Portal Pop, but today is dedicated exclusively to Spark Chronicles.
Previous The sting of the euro: in 20 years, prices have risen by 150%, but salaries only by 50%
Next Juve, under pressure Vlahovic is exalted: numbers predestined for Dusan. And now he challenges Fiorentina | First page