Such a low temperature is related to the relatively stable high pressure system that stretches from Norway to Russia. It draws colder and colder air straight from the North Pole, which it settles. Due to the fact that we have the shortest days of the year and negligible sunshine in the north of Europe, it has no chance to warm up a little on the way.

In Scandinavia, the temperature dropped below -40 degrees Celsius

Day by day frosts are getting stronger and are spreading to other European countries. On Monday morning, the temperature drops below -40 degrees Celsius for the first time on the Old Continent this winter. It happened at three stations in Sweden and in Russian Kanevka. The coldest, -40.9 degrees Celsius, was in the town of Naimakka. This value is slightly higher than the December record for frost at this station. From -30 to -33 degrees C were recorded in Kuusamo and Rovaniemi in Finland.

Cold record in St. Petersburg. Frost will get worse

It was also very cold in the larger cities. According to the Hydrometeorological Center of Russia, the temperature in St.Petersburg dropped to -21 degrees C. It was the coldest night of December 6 in the city in 128 years! The previous record was set in 1893 and amounted to -20.5 degrees C. Meteorologists note that such a low temperature was recorded at the station in the city center. In the suburbs, thermometers showed as low as -25, -30 degrees C.

The frost wave, according to forecasts, will spread. Until Thursday, a solid frost can be felt in the Baltic States and in itself Moscow, where the maximum temperature is to be at the level of -10 degrees C and lower, and at night it will drop to -20 degrees C. We will also feel frost in Poland, especially in Podlasie, where mercury bars will sometimes show at most -7 degrees C during the day, and -15 degrees C at night. 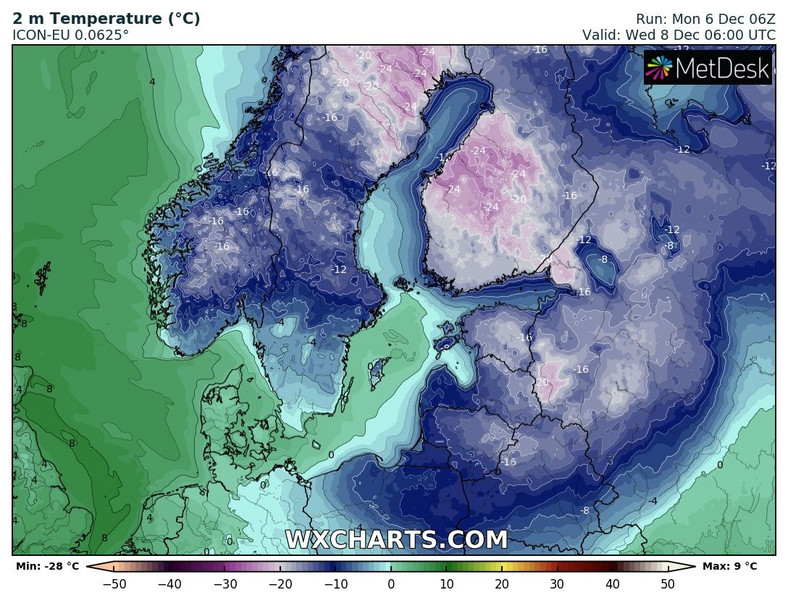 A wave of frosts in northern and eastern Europe

The present frosts in Europe are not, however, an announcement that a solid winter will enter all of Europe in the near future. Across the continent, except the north, next week Scandinavia, there will be a thaw. The temperature will rise above 0 degrees Celsius (it will get over 20-30 degrees C warmer locally), and the snow will turn to rain.

Do you want to be up to date with weather information? Sign up for Messenger notifications on your phone.

Videogames entered his life in the late '80s, at the time of the first meeting with Super Mario Bros, and even today they make it a permanent part, after almost 30 years. Pros and defects: he manages to finish Super Mario Bros in less than 5 minutes but he has never finished Final Fight with a credit ... he's still trying.
Previous Zlatan Ibrahimovi make a decision about his future. “Bd puts pressure” Pika none
Next Ministry of Labor and Social Policy: In November, the unemployment rate was 5.4%.