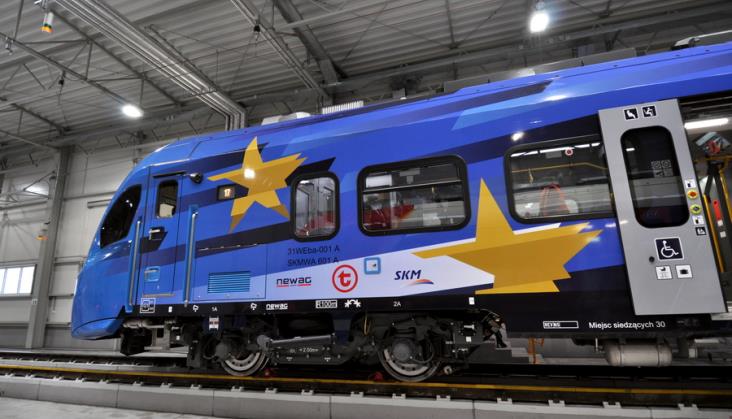 What are the new Impulsy 2 for SKM Warszawa? [zdjęcia]

The first brand new Impuls 2 four-unit multiple units were delivered to Warsaw. On January 12, 2022, their presentation was organized in the Warsaw base of SKM – their operator.

In total, SKM Warszawa ordered 21 electric multiple units from Nevag (originally the purchase was to be carried out in Pesa, but the contract was terminated). 15 five-car and 6 four-car vehicles were ordered in Nowy Sącz. The first two in the latter version have just appeared in the SKM Warszawa base in Szczęśliwice.

The vehicles are 75.6 meters long (the five-car version will be 91.9 meters long). They can reach speeds of up to 160 km / h, although in scheduled traffic they will run at lower speeds due to the dense arrangement of SKM stops. Nevertheless – they have an ETCS system and, if necessary (for example when starting accelerated courses), this speed can only be achieved with one driver on board.

From the passenger’s point of view, the multitude of handrails is very noticeable. There are also railing “Christmas trees” at the entrances (apart from the last door of the vehicle, where wheelchair users, prams or cyclists can freely enter), although locating them here is controversial. They encourage the blocking of crowded corridors. In all carriages, the space between the entrance doors, in the middle of the carriages, is organized in the “metro” style, ie with the seats facing each other (apart from them, the layout is traditional, here and there, at the door, the seats are single, which makes it easier to move around the train). However, side-facing seats are not foldable, they are fixed. They are also … very comfortable and quite large and slightly set back from the walls of the vehicle, which means that the interior is not as spacious as in the Impulses of the first series or the Elves. Even here, however, there is space for larger luggage or a trolley, right next to the exit door.

As for the seats – mounted in the vehicle are, although hard, very well profiled and comfortable. Even a long journey on them should not cause any discomfort. The windows are large, the side walls and ceilings are made of nice materials, and the full happiness is lacking maybe a bit more interesting than red and gray colors, although here too you can see progress in relation to the first “hospital” Impulses and Elves, who have been driving SKM Warszawa for years . There are many places for luggage above the windows, which makes the train more like a regional unit than a city one. It is similar in the space with a raised floor, next to the cabins, where almost exclusively the arrangement of seats “behind” was used, not compatible with the conditions of a large exchange of passengers, characteristic of urban railways. On the other hand – over long distances, e.g. from Otwock to Pruszków, such a space will ensure a comfortable journey.

The space for bicycles was perfectly organized (horizontal stands, not hanging ones). In the case of the space for prams, the author does not feel competent in its assessment, but it seems that it was made in a professional manner. There is wifi on board, passenger information, already known from other ZTM Warszawa vehicles, works very well. It is placed above the windows, which allows for better illumination of the interior in daylight and allows standing passengers to better orientate where they are. Train managers have their own dedicated space at the end of the train. The floor in the vehicle, apart from the space next to the cabins, is almost even.

We are waiting for the possibility of traveling with new Impulses. According to the reports of people who have already driven them, it is an extremely quiet vehicle. Scheduled trains are scheduled to go on line in early March.

The variety offered by video games never ceases to amaze him. He loves OutRun's drifting as well as the contemplative walks of Dear Esther. Immersing himself in other worlds is an incomparable feeling for him: he understood it by playing for the first time in Shenmue.
Previous USA. Vaccinations against COVID-19. Donald Trump: I took the third dose
Next Ski Jumping. Kamil Stoch may not perform in Beijing? WC in Zakopane.