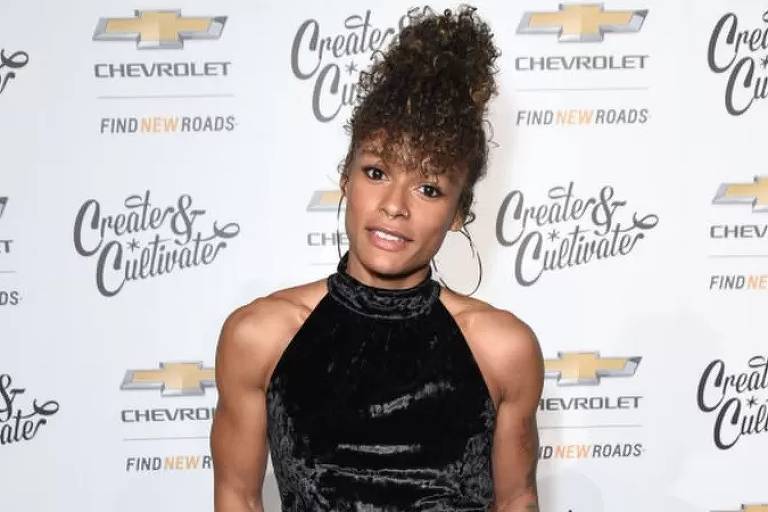 Not long ago, Melissa Alcantara worked as a waitress. Today, she is Kim Kardashian’s personal trainer and Instagram influencer.

And it was Melissa’s personal journey that inspired the businesswoman and socialite to initially hire her.

Melissa is now extremely dedicated to the practice of physical activity. But it was not always so.

She says that she was never an athletic person by nature and spent years adopting a chaotic lifestyle in relation to health – in addition to smoking and drinking, she was constantly struggling with the scales.

“I’ve been yo-yo dieting my whole life,” she says in an interview with BBC Radio 4’s The Joe Wicks Podcast. “I had low self-esteem. I’d get huge, then thin, then bulky. I’d starve. I wouldn’t eat or exercise properly. “

“I didn’t grow up with that kind of thing. I didn’t play any sports. I’m from the Dominican Republic, and in Dominican culture, fitness isn’t important. And neither is eating or choosing healthy foods. You eat a lot of fried foods,” he explains. .

The fitness “epiphany” happened about ten years ago, after her first pregnancy, when Melissa gained 31 kg.

She was going through postpartum depression.

What she also didn’t know is that her life was about to change.

“So one day I was lying on the couch, feeling sorry for myself, and I saw this commercial,” about a high-intensity exercise program. “I thought, It doesn’t matter if it’s real or not, what I’m doing right now isn’t working. (…) I need to do something different,” she recalls.

She then began watching the videos and following the program’s intense exercise routine.

“I would wake up every morning at 5 am to exercise.”

But the results of that drastically changed not only his physical appearance, but the direction of his professional career.

Melissa was in production at the time, and had a well-paying job. But she had fallen in love with the fitness world. And she went on to work with an exercise program.

In order to have more time to dedicate herself to her new career, she decided to change her job in the production area for a job in a restaurant.

She began documenting her journey on Instagram – and about five years ago, Melissa received a private message from Kim Kardashian via the social network.

The businesswoman wanted her to be her personal trainer.

“I was a waitress in Brooklyn (New York). How did she find me? Out of all the fitness (universe) people, of all the influencers, I was just someone who didn’t have a following, and she thought, ‘I want this girl train me’.”

What Melissa finds so incredible about this contact is that a month earlier, she had bought a one-way ticket to move with her family to Los Angeles – where they would look for a job and start a new life.

“When she (Kim) contacted me, she said, ‘Hi, I know you live in New York, and I’m in California. I’ll pay you to stay here for a few weeks.’ And I said, ‘Em In a few weeks I’ll be living there’. We just couldn’t believe it.”

“It was fate. And since then, I’ve been training her every day since I moved.”

Despite the VIP client, when Melissa arrived in Los Angeles, she was deep in debt.

“We were renting a two-bedroom apartment that we couldn’t afford in West Hollywood. We rented one of the rooms via Airbnb, and our family of four and a dog stayed in the other room… I was selling an exercise program for US$ 50 (R$ 246). Every two weeks, someone bought it and we were jumping for joy”, he recalls.

But it was enough to appear in an episode of the series Keeping Up with the Kardashiansand being introduced to the world by Kim, which had an immediate effect on her finances.

Melissa has been Kim Kardashian’s personal trainer for five years now – and travels the world with her.

She says that the businesswoman practices physical activities five to six times a week.

“We’ve done a biceps curl a million times, but I’ll always explain to her how to do a bicep curl,” he says.

“I want her to learn. I don’t want her to do what I tell her for an hour… If you don’t take what you’ve learned in this life and pass it on to other people… what’s the point? That’s the purpose of life.”

Initially, Melissa’s focus was on aesthetics, but eventually turned to physical and mental health.

Next, she shares some of the habits and lessons she learned along her path.

Have you ever thought about starting the day early?

Melissa says the best thing for her mental health is to get out of the house before the rest of the world wakes up.

“Early in the morning is my favorite part of the day,” he reveals.

“That’s when I’ll take a walk [na minha moto] and do something outdoors, before everyone gets up, before the text messages come in, before the emails. I feel like I’m the only person there is… and nothing is expected of me except that I enjoy that moment.”

“I suggest you wake up at sunrise and take a few hours for yourself every day. I’ll tell you what, there’s nothing like it.”

The importance of ‘being present’

Melissa says that her mind is often racing and she finds it difficult to relax.

“When I’m anxious or stressed, it’s because I’m inside my head. And I’m not here, right now, right now, just enjoying what’s going on. Most of the time, you don’t have a problem right now. past or you are thinking about what will happen in the future and you are creating problems in your head”, he analyzes.

“It all comes down to being present.”

After seeing a therapist, she learned a very simple way to stay in the moment.

“I was always [pensando] in the past, or in the future, and making me anxious. I didn’t understand why. Then [meu terapeuta me orientou para] always say this little mantra: ‘I am driving; I am walking; I’m cooking.'”

Whatever task she is doing, she keeps repeating it to herself.

“It brings you back to the moment,” he explains.

Success starts with believing in yourself

Despite the initial lack of self-esteem, Melissa says she always believed she could achieve what she wanted.

“Everyone should always do what’s best for themselves and what will make them the best version of themselves.”

The power of ‘yes’

Melissa’s life philosophy is also about trying to say more “yes” to things that bring her happiness and more “no” to other things.

Videogames entered his life in the late '80s, at the time of the first meeting with Super Mario Bros, and even today they make it a permanent part, after almost 30 years. Pros and defects: he manages to finish Super Mario Bros in less than 5 minutes but he has never finished Final Fight with a credit ... he's still trying.
Previous the true story behind the film with Julia Roberts
Next “We have never seen him so vulnerable”