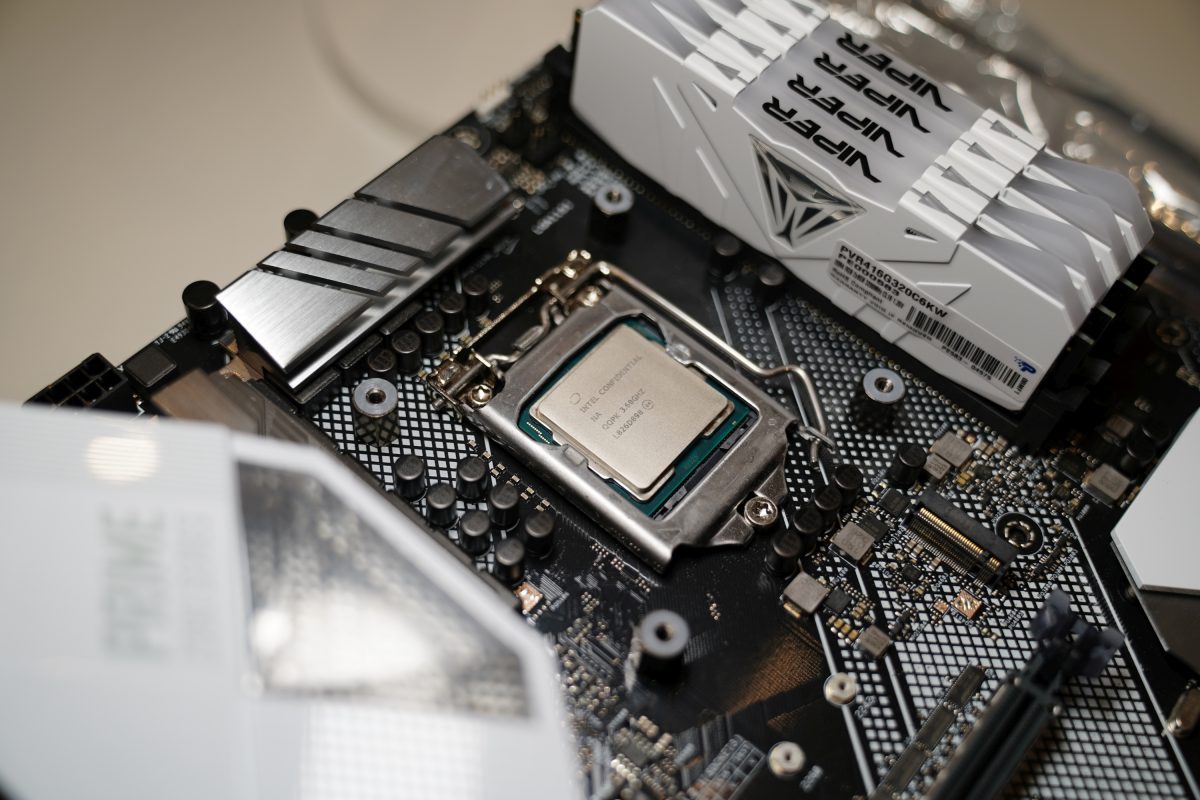 Nowadays, the market of processors for desktop PCs is dominated by two brands – Intel and AMD. Despite only two main CPU manufacturers, the choice is really huge, because each generation, both camps bring better and often even very profitable systems, which are the heart of our computer. With more choice, the question arises: “Which processor would be perfect for me?” There are a lot of options, and in today’s guide I will try to advise which processor to choose, taking into account several key aspects, while suggesting which processor is suitable for each task.

Which processor to choose? For starters, maybe something cheaper

At the beginning of the ranking, I would like to focus on – in my opinion – the most interesting proposals. These chips are rather mid-priced, but will provide good performance. My favorites here are Intel Core i5-11400 (F) and AMD Ryzen 5 3600.

Both units are very similar in terms of construction, so they have 6 physical cores and 12 logical cores (threads) on board. It is worth adding that the Intel design is definitely newer, it was released at the beginning of this year, and Ryzen – more than 2 years ago.

So where does this combination come from? In many Polish stores, we can easily get Ryzen 5 3600 in the amount below PLN 1000 – similar to Intel, which in the version without an integrated graphics system (with an annotation F) costs less than PLN 850. The performance of processors in general turns out to be very similar – in the programs the Reds are in the top, while in the games the Blue ones.

The systems themselves can also be matched with a motherboard, as well as RAM memory. In the case of the i5-11400 model, it is worth looking for a unit based on the B560 chipset – for example MSI MAG 560 TORPEDO, which – in combination with DDR4-3600 modules – can easily handle the above-mentioned CPU. The advantage of the platform with the Ryzen 5 3600 and the B550 board (in a similar shelf we find the popular MSI Tomahawk) is the possibility of overclocking the processor, because each Ryzen has an unlocked clock multiplier.

Nevertheless, such a connection may turn out to be a bit more expensive than Intel’s much more profitable set. First of all, in games, it will provide higher performance, at the same time the configuration has the best price-quality ratio (you can also try a slightly cheaper H510 motherboard).

This type of equipment will prove to be very universal, ensuring good performance for the multimedia home computer on which we plan to play, and also perform less demanding work on the machine.

In the higher price range, there are several interesting offers

Going a bit higher, the next interesting proposals will be Intel Core i5-12600KF and AMD Ryzen 5 5600X. The processors are slightly different – mainly in terms of construction, because the Intel design has 10 cores on board (6 performance, 4 energy-saving) and 16 threads, while Ryzen “only” has 6 cores and 12 threads. Interestingly, although currently the cheapest Alder Lake has been relatively recently on the market, it costs less than PLN 100 than Ryzen (PLN 1379 vs PLN 1479).

Nevertheless, motherboards with the Z690 chipset are still expensive, and the cheapest proposal with a DDR4 controller costs PLN 939, while the B550 with an efficient power section can be bought around PLN 700.

In general, the set with Intel may turn out to be a bit more expensive (~ PLN 300), but the performance it brings is really impressive, so we will combine the processor with cards such as the GeForce RTX 3070, without much bottleneck from the processor. This one will be noticeable mainly in games, in programs it may be a bit smaller.

When choosing sets, it is worth considering whether you can pay extra for Intel’s proposal – if not, the Ryzen 5 5600X is still a great processor that will perform very well in almost any application, be it in programs or computer games.

In the higher segment, the situation is slightly different, because the Ryzen 7 5800X costs about PLN 1,800, and the Core i7-11700K (previous generation) is a bit cheaper. However, processors are suitable not only for typical home sets for players, but also for less demanding professionals who need an efficient machine for work – be it for rendering or creating music. Both systems have 8 cores and 16 threads on board, but – as we can expect – it is Ryzen in the programs that will be distinguished by higher performance than Intel.

Blue’s CPU, however, will provide more displayed frames per second in games. Even so, in this case, the Ryzen 7 5800X, along with the motherboard on the X570 chipset, may prove to be more profitable than the i7-11700K + Z590, due to its more universal nature as Ryzen will perform better in many applications.

In a high-end price range, the choice may not be so obvious

The high price range in the case of the last generation of Intel processors was noticeably less efficient than the competition’s proposition. The Intel Core i9-11900K noticeably loses to the Ryzen 9 5900X, which in general is doing much better – in applications it provides a much higher performance, while in games it is slightly less efficient, but these are marginal differences. At around PLN 2.5 thousand, the Ryzen 9 5900X is more profitable than the i9-11900K, especially for users who use the computer for work and gaming.

The system – in combination with the X570 motherboard with a strong power section – can turn out to be perfect in computers of streamers, film editors or content creators in general. Nevertheless, for people looking for high performance in games, the Intel Core i7-12700K will be more profitable (especially PLN 500 cheaper, because it costs about PLN 2,000) than the i9-11900K. At the same time, by purchasing a platform based on Alder Lake, we have greater expandability (to the next, 13th generation), as well as DDR5 support on selected boards.

In the case of the offer for enthusiasts, the choice is very simple – the Core i9-12900K in the amount of about PLN 3,000 offers much higher performance in games and applications than the AMD Ryzen 9 5950X. Intel’s proposal – similarly to the lower segment – is PLN 500 cheaper, but the price of the processor must include an amount for a good Z690 motherboard (for example AORUS Z690 PRO with a 19-phase 16 + 1 + 2 power section), so the price for both the sets are similar.

When it comes to processors for the most demanding users, their choice is currently very one-sided, because Intel does not have a very rich offer in this segment. The most powerful chip based on the Cascade Lake-X architecture, the Intel Core i9-10990XE, has “only” 22 cores and 44 threads on board, while the basic i9 from the Extreme series is slightly different from the desktop i9-10900K.

In the AMD portfolio you can find more proposals – the “cheapest” Threadripper PRO 3955WX has 16 cores, 32 threads on board and is suitable mainly for computers on which the user will primarily work (such processors are completely unsuitable for computer games). So, graphic designers, editors, filmmakers (Threadripper was used in the production of Terminator: Dark Destiny), music producers or, in general, content creators requiring the highest performance from their hardware, will appreciate the computing power of such a powerful processor.

The basic Threadripper costs PLN 5.5 thousand, in addition, AMD also offers units with 24, 32, and even 64 physical cores. However, it is prohibitively expensive equipment, which costs tens of thousands of zlotys, dedicated to the most demanding professionals – who are able to fully use the computing power of the HEDT platform.

Summary – is it finally what processor to choose?

Choosing a processor is not an easy task. When buying a computer, it is worth considering at least this average price range (Intel Core i5-11400), because going lower we get a system that may not provide high performance in 3/4 years. When choosing a proposal from the above price range, it is worth analyzing whether we need the Intel Core i9-12900K, or whether it is worth saving a few hundred zlotys by buying the Ryzena 7 5800X, which is still very efficient.

Therefore, it is worth adjusting the processor to the needs, at the same time asking yourself the question: “am I able to use half of the system’s potential?”.

If you want direct advice, please visit the Facebook group Tabletowo, where I will be happy to give you a few tips on choosing the right computer equipment, tailored to your budget and requirements.

_
All external links in the text lead to Media Expert.

He likes dogs, pizza and popcorn. Already a fanboy of Nintendo and Sony, but today throws anything. He has collaborated on sites and magazines such as GameBlast, Nintendo World, Hero and Portal Pop, but today is dedicated exclusively to Spark Chronicles.
Previous Indonesia. Volcano eruption. The death toll is increasing
Next A last-ditch offer for Ousmane Dembele. It is known what FC Barcelona will propose to him