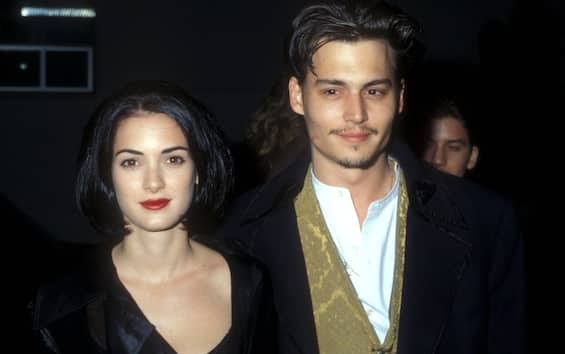 During an interview with Harper’s Bazaar magazine, the actress spoke of the breakup of the sentimental relationship that tied her to the star from 1989 to 1993. Winona called that split like her real-life “Girl Interrupted,” referring to the 1999 film she stars in with Angelina Jolie

Winona Ryder recalled her split from Johnny Depp, the star with whom the actress was officially romantically linked from 1989 to 1993.
The actress spoke about it in an interview with the magazine Harper’s Bazaar, calling the breakup with Depp his real-life “Girl Interrupted.” It refers to the 1999 film in which she stars alongside Angelina Jolie, Brittany Murphy and Elisabeth Moss, among others.

We remember that Winona Ryder and Johnny Depp were not only a couple but if anything the most beautiful couple of the Nineties. After getting engaged in 1989, the two worked together for the first time on the set the following year, for the film “Edward Scissorhands” directed by Tim Burton.

Winona was certainly not a passing flame in Johnny’s life: he put his love for her on paper, tattooing it on his arm. The star of Pirates of the Caribbean he got a tattoo of the phrase “Winona Forever”. After the separation – and above all after Johnny Depp got engaged to Vanessa Paradis, who probably and understandably didn’t like that dedication – Depp had the tattoo retouched, transforming the phrase into “Wino forever” (a distortion of winewine, one of the passions of the actor and musician).

Gone in the Night: the trailer of the new film with Winona Ryder

Johnny Depp and Winona Ryder were the most beautiful rock fairy tale prince and princess ever. Unfortunately however, unlike their Disney colleagues, they were unable to crown their love with the usual fairy-tale happy ending sign. The split owes much to the enormous media pressure that ended up crushing the couple, as Depp admitted years ago.
But they said goodbye only as lovers, certainly not as friends: they have maintained excellent relationships and have attended all these years.

Talking about the love affair with him in a recent interview with Harper’s Bazaarthe star of Stranger Things she called it “her real-life Girls, Interrupted moment.” The interview can be found in the digital issue of Harper’s Bazaar of July 2022, issue of which Winona is the cover star.

In numerous past interviews, Ryder had called the farewell to Depp his “first real breakup” and “first real heartbreak”. It was Johnny Depp who suggested that it was the media frenzy that caused the end of their relationship. as the journalist Jessica Wang points out in the US magazine Entertainment Weekly.

“It’s very difficult to have a personal life in this city,” the star told al Los Angeles Times in 1993. “My relationship with Winona…it was my mistake to be as open as we were, but I thought if we were honest it would destroy that monster of curiosity. Instead it stoked it, gave people license to feel like a part of it,” Depp continued.

Johnny Depp touring with the Hollywood Vampires in summer 2023

The reference is to the film directed by James Mangold in 1999, an adaptation of Susanna Kaysen’s memoir of the same name. In the film Winona Ryder plays a character called Susanna Kaysen, a teenager who spends 18 months in a psychiatric hospital due to a suicide attempt. After this time in the nursing facility, you will be diagnosed with borderline personality disorder. Ryder was not only the star but also the executive producer of the film.

Winona Ryder said she worked with “an incredible therapist” to better empathize with the film roles she’s had to play throughout her career, including ‘Girl, Interrupted’.

“I remember, I was playing this character who ends up being tortured in a Chilean prison,” Winona Ryder said of her character in the 1994 film House of the Spirits. “I was looking at those fake bruises and cuts on my face, and I struggled to see myself as this little girl,” she added. At that point she wondered if she wanted to treat that little girl the way she was treating herself. “I remembered looking at myself and saying, ‘This is what I’m doing to myself inside of me.’ Because I just wasn’t taking care of myself,” the actress continued.

In her interview, in addition to talking about Johnny Depp as one of her great loves, Winona also thanked her colleague Michelle Pfeiffer, her co-star in the film “The Age of Innocence” who, according to what Ryder told her, given his support during one of the most difficult periods of his life. “I remember Michelle saying, ‘It will pass.’ But I couldn’t hear it. I’ve never mentioned it. There’s this part of me that’s very private,” she continued.
In 2001 Ryder was arrested for shoplifting at a Saks Fifth Avenue, after which the actress decided to take time off from work.

“I definitely retired,” she explained. “I was in San Francisco. But I didn’t get any offers either. I think it was a mutual breakup. It’s so interesting when you look at the early years. It was a pretty cruel time. There was a lot of badness out there… And then I remember being back in Los Angeles and it was a tough time. And I didn’t know if that part of my life was over,” Winona Ryder admitted.

In Hollywood, the actress has reached very high peaks, but she has also experienced long periods of decline and distance from the sets. Her redemption came thanks to the small screen: before her, in 2015, with a secondary role in the miniseries ‘Show Me a Hero’, then the following year thanks to the character of Joyce Byers from ‘Stranger Things’. In 2000 she received her star on the Hollywood Walk of Fame

Winona Ryder – full name at the registry office Winona Laura Horowitz – she’s born on October 29, 1971 in Minnesota. She achieved international fame in the early nineties with films such as Edward scissor hands and Sirens. Thanks to the latter she got her first Golden Globe nomination. He has worked with some of the best directors, including Burton, Coppola, Scorsese. In 2000, the star on the Hollywood Walk of Fame. Here are his best performances

Beetlejuice (1988) – In the Tim Burton film Beetlejuice the actress plays Lydia Deetz, rebellious teenager and adopted daughter of the Deetz, new tenants of the ancient villa inhabited by the spirits of the deceased Adam and Barbara Maitland. The film immediately conquers the teenagers, who identify with Ryder. The film starts a successful partnership for Winona with Burton

Pieces of Madness (1989) – Directed by Michael Lehman, the film becomes a small cult of the late eighties. It is considered one of the most important films of Winona Ryder, who plays the role of Veronica Sawyer, Ohio high school student disgusted by three classmates, all three named Heather: Veronica will team up with the rebel Jason Dean (Christian Slater) to implement a bloody plan. On set, Ryder and Christian Slater have fallen in love

David Martin is the lead editor for Spark Chronicles. David has been working as a freelance journalist.
Previous https://gamingbeasts.com/the-amazing-spider-man-2-download/
Next Capri-Hollywood, the island lights up – Espectáculos