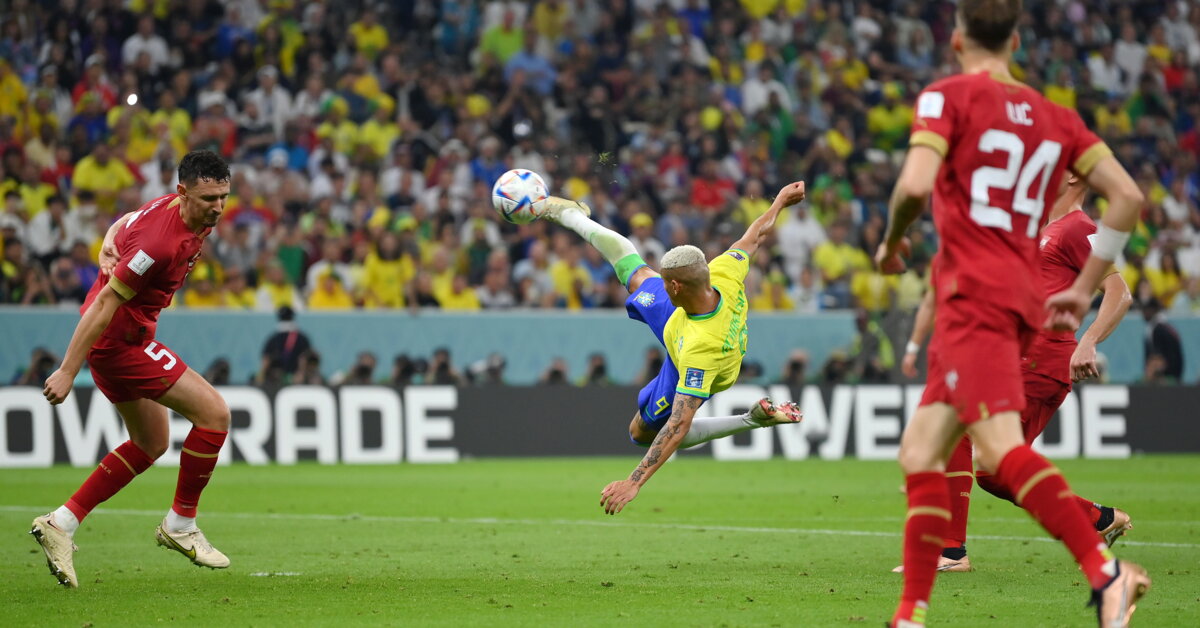 A brace in the second half from the Tottenham striker gave Tite the three points. A post for Alex Sandro and a crossbar for Casemiro

Brazil beat Serbia 2-0 and begin their Qatar 2022 adventure in the best possible way. After a first half with few emotions, the Seleçao raises the pace in the second half and takes the chair Richardson, the worst on the pitch until the winning tap-in in the 62nd minute which unlocks the game. The goal also released the Tottenham striker, who doubled his lead in the 74th minute with a spectacular overhead kick. For Brazil also a post with Alex Sandro (60′) and a crossbar with Casemiro (81′). In Serbia, Vlakhovic he entered in the 66th minute without leaving a trace.

THE MATCH
Great show of strength from Brazil, which leaves no way out for a discreet Serbia only in the first half and sends a clear message to their rivals for the title. The cover man is Richarlison, Tite’s protégé who has the merit of not changing him and is rewarded with a brace: the tap-in that unlocks the match is easy, the semi-backhand that closes it with applause. The Seleçao took a while to fuel, but when Neymar and Vinicius raised the engine revs, it was the middle of the night for Vlahovic and his teammates. The entry of the Juventus player unbalanced Serbia too much which, after the first goal conceded, was at the mercy of the opponents. Only a great Vanja Milinkovic-Savic avoided a much worse defeat, with a series of great saves, not counting the woodwork hit by Alex Sandro and Casemiro. Out of tune notes for the Seleçao Neymar’s early exit for a stomp in the ankle, Danilo’s cramps in the final and the colorless performance of Raphinha, the only Brazilian really subdued. Serbia held out for a time, but Stojkovic lacked its stars: bad Sergej Milinkovic-Savic and Tadic, Vlahovic did not arrive.

Tite chooses a very fluid 4-2-3-1, with Danilo who concentrates in the possession phase and becomes an added halfback and Neymar who starts from midfield to touch as many balls as possible. Richarlison is up front, with Vinicius and Raphinha on the wings. Cautious colleague Stojkovic, who chooses the three-man defense led by the Florentine Milenkovic. Sergej Milinkovic-Savic and Tadic in support of Mitrovic. Juventus players Vlahovic and Kostic, not at their best, start from the bench. There is great anticipation for the debut of the Seleçao, the big favorites for the final victory, but the first half at the Lusail Stadium offers very few emotions. Serbia is good at defending in order and closing the passing lines, Brazil keeps the ball in hand and tries some acceleration with Vinicius and Raphinha, but the Torino goalkeeper Milinkovic-Savic doesn’t run into particular problems and is attentive to the 27 ‘, when the verticalization of Thiago Silva triggers Vinicius, closed with a perfect exit from the Serbian full-back. Real’s talent had another chance in the 41st minute, but Milenkovic made up for the mistake and recovered it, forcing him to make an inaccurate shot. The green-and-gold often arrive in the Serbian area, but Richarlison doesn’t get one right, he moves badly and never gets to a conclusion.

In the second half Brazil raises the engine speed and Serbia is in trouble. The Torino goalkeeper made the only mistake of a great evening by serving Gudelj badly, but Raphinha kicked him after recovering the ball (46′). Neymar and Vinicius seem to have mopeds instead of legs and the Serbs risk capitulating in the 60th minute, but Alex Sandro’s left foot hits the right post. The goal is in the air and it is the worst on the pitch up to that moment: Milinkovic-Savic clears Vinicius, winning tap-in by Richarlison who anticipates Pavlovic (62′). Having taken the lead, the Brazilians begin to play as they know how, taking advantage of the many spaces left by Serbia. Stojkovic makes the serious mistake of switching to two strikers with Vlahovic alongside Mitrovic, unbalancing the team too much and losing all balance. In the 74th minute Richarlison drops the encore with a splendid semi-forward kick on Vinicius’s cross (74′). At this point Brazil could even spread, but Casemiro was stopped by the crossbar (81′) and Milinkovic-Savic said no first to Rodrygo and then to Fred. A victory that makes a wrinkle and confirms what was already known: Brazil is probably the great favorites of the World Cup.

THE STATISTICS
• After losing their opening matches at the World Cup in both 1930 and 1934, Brazil have gone unbeaten in their opening match at the tournament on the last 20 occasions (W17, D3).
• Richarlison is the eighth Brazil player to score at least two goals in his opening World Cup match, the first since Neymar in 2014 and only the second in the 21st century.
• Richarlison has been involved in 9 goals in his last 4 starts for Brazil in all competitions (8 goals and 1 assist).
• Richarlison has scored three braces in his last five starts for Brazil in all competitions, having found his way to goal in each of them.
• Since his debut for Brazil in September 2018, Richarlison has scored 19 goals for the Seleçao – more than any other green-and-gold player in the period.
• At 38 years and 63 days, Thiago Silva became the oldest player to take the field for Brazil in a World Cup match, surpassing Djalma Santos (37 years and 138 days in 1966).
• In general, for the first time since the 1986 edition, no player has been sent off on the first day of the World Cup.

David Martin is the lead editor for Spark Chronicles. David has been working as a freelance journalist.
Previous The Wolf of Wall Street, it was Margot Robbie who insisted on the full nude: that’s why
Next In the Valley of God Download Full Game PC For Free