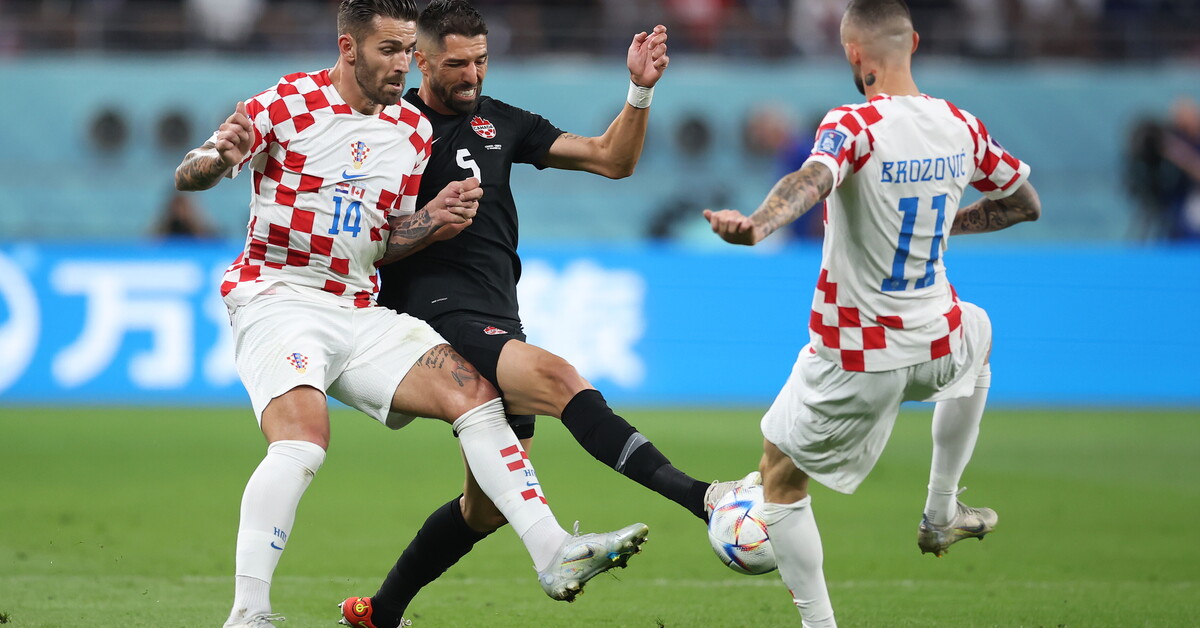 There Croatia eliminate canada come on World Cup winning 4-1 on matchday two of Group F. In Qatar, the North American national team found their historic first goal in the World Cup after 68 seconds with Alphonso Davisbut that wasn’t enough Canada to win the first points. Croatia’s reaction leads to the turnaround already in the first half with Kramaric and Livaja within eight minutes, with the set still of Kramaric in the 70th minute to close the accounts. In recovery the poker of Majer which certifies the Canada as second international eliminated by Qatar 2022.

The Canada did Canada, but the Croatia did Croatia. With these premises there was little history on the pitch at the Khalifa International Stadium with the 4-1 that sends the North American national team home and at the same time gives back to these World Cup the Balkan selection. The immediate benefit signed by Alphonso Davis he demonstrated the offensive qualities of Canada, a national team full of talent to be exploited for the next edition of the tournament which they will play as hosts, but after twenty minutes played off the rhythm, Croatia’s quality and the opponent’s limits at the defensive level clearly emerged. Protagonist of the day Kramarichis equalizer and brace in the second half.

However, the first twenty minutes really confirmed the positive things Canada showed in the match against Belgium. An offensive, fast and technical game regardless of the Davies lead after 68 seconds, historic as the first for the Canucks in the World Cup. The assist by Buchanan it was a kiss, but at a high pace the North Americans played it out. It didn’t last long, victim of the normal dribbling of Croatia who – once they took the measures of the 4-4-2 modified by Herdman – took control of the midfield, above all with Kovacic. After a couple of holes in the area not exploited by Livaja, the right play arrived in the 36th minute with the Kovacic-Perisic axis who conceded Kramaric the diagonal of the draw. Eight minutes later Juranovic’s gallop from the right reached an assist with a tunnel for the comeback of Livaya with which you went to the interval.

Having understood the trend and finished the surprise effect, in the second half Canada returned to the field with its certainties in the 3-5-2 of Herdmanbut after Osorio’s shot to the post it was always Croatia who dominated the action. Kramaric in the 54th minute he took the measures of Borjan’s new goal, then beating him in the 70th minute making the most of an assist at the far post from Perisic and crossing with his left foot for the 3-1. In the final, coach Dalic gave space to some new faces and three of these are in full recovery, Petkovic, Orsic and Majer (in this order) they built the 4-1 counterattack by exploiting Miller’s blunder. Very useful network in key goal difference.

Canada have lost all five of their World Cup matches – only El Salvador (6) has played more matches in the competition and always found defeat.

Canada became the first team to have lost a World Cup match in which they found the goal in the first 2 minutes of the game since Denmark against Brazil in 1998.

Andrej Kramaric is the second Croatian player to score twice in a World Cup match, following Mario Mandzukic against Cameroon in 2014.

Croatia have managed four goals in a single World Cup match for the second time, following a 4-0 win against Cameroon in 2014.

Ivan Perisic is the Croatian player who has been involved in the most goals between World Cups and European Championships in history (16 – 9 goals + 7 assists).

Alphonso Davies scored the fastest goal in this World Cup, in the 2nd minute of the game.

Alphonso Davies’ goal after 68 seconds was the fastest in the World Cup group stage since Clint Dempsey’s (29 seconds) against Ghana.

Marko Livaja is the first Croatian player to score a World Cup goal playing for a club in the Croatian league since Ivica Olic in 2002.

Atiba Hutchinson played his 100th game for Canada, becoming the first player to reach this milestone for the national team.

David Martin is the lead editor for Spark Chronicles. David has been working as a freelance journalist.
Previous An hour of rain and the island returns to “Venice” – Il Golfo 24
Next Sora’s “Gioberti” turns red… the school representatives tell us